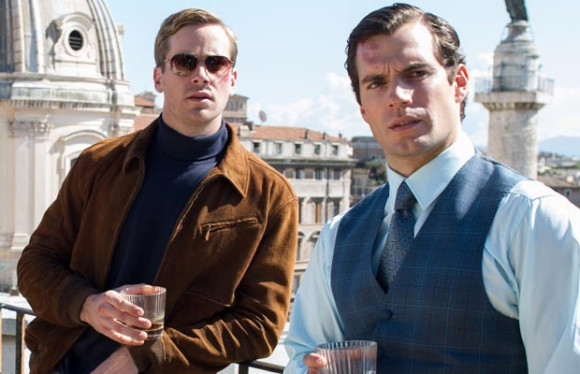 “The Man from U.N.C.L.E.” is the type of movie you go into not expecting much. Guy Ritchie hasn’t directed anything in the past decade that has lived up to the distinctiveness of his first two hit films: “Lock, Stock and Two Smoking Barrels” and “Snatch.” The film’s two stars, Henry Cavill and Armie Hammer, aren’t exactly known for their exceptional acting, but rather for their good looks. We’re talking about the stars of “Man of Steel” and “The Lone Ranger,” to put things in perspective. Rounding out the low expectations is the fact that this movie is based off of a 1960s TV series of the same name.

However, Ritchie knows his cards and doesn’t try to bluff. He knows that he is dealing with Henry Cavill and Armie Hammer, not accomplished thespians like Michael Fassbender and Benedict Cumberbatch. Recognizing the capacity of his leads, Ritchie injects his subject material with a lively screenplay and whole lot of style. The result is a surprising revival of a beloved series.

Recognizing the capacity of his leads, Ritchie injects his subject material with a lively screenplay and whole lot of style. The result is a surprising revival of a beloved series.

The film opens with Roberta Flack’s “Compared to What” paired with a sparky montage of Cold War headlines and news reels, and then immediately sends the audience to 1963, in the divided city of Berlin, Germany. Napoleon Solo (Henry Cavill), an ex-army officer turned professional thief, is the Americans’ top secret agent, serving his government in the field in order to avoid doing time in prison. He is tasked with extracting a woman named Gaby Teller (Alicia Vikander) from East Berlin. Illya Kuryakin (Armie Hammer) is a freak athlete with a chip on his shoulder and the Russians’ top secret agent. He is waiting for Solo on the other side of the wall with the sole mission of stopping him. Little do these two rivals know they will be forced into partnership by their governments in a joint mission to save the world from a nuclear attack. In order to find her father, nuclear scientist Dr. Udo Teller (Christian Berkel), Solo and Kuryakin are tasked with going undercover with Gaby in order to link up with her estranged Uncle Rudi (Sylvester Groth) who may know his whereabouts.

Like many spy films, there are plenty of twists and turns throughout the story. What separates “U.N.C.L.E.” from any other movie of its category is how Ritchie incorporates snappy dialogue and an energizing attention to detail. One of the most appealing aspects of “The Man from U.N.C.L.E.” is Ritchie’s use of humor. There is a competitiveness between Solo and Kuryakin that provides several laughs, each trying to prove his country better with their respective nifty gadgets and nuanced fighting techniques. The levity in the dialogue prevents “U.N.C.L.E.” from taking itself too seriously. However, Ritchie also flashes a dark side at several points during the film. In one scene a torture specialist describes his disturbing childhood and the delight he felt working in demented laboratories for the Nazis during World War II. There is a nice balance to the film that keeps it light but packs a punch when needed.

There is a nice balance to the film that keeps it light but packs a punch when needed.

One of my favorite scenes came near the end of the film when Solo and Kuryakin are involved in the raid of a compound. Instead of wasting ten minutes documenting each and every stage of the raid, Ritchie compacts it into a one-minute sequence. Using sliding split screens to quickly flash through each stage, Ritchie saves time and creatively cuts through what would have been a long and boring scene.

At the beginning of his career, Guy Ritchie achieved validation by masterfully capturing the grittiness, absurdity and humor of the underground criminal world of urban England. It has been a long time since Ritchie’s first two films, and he has since picked up a taste for finer things. While “The Man from U.N.C.L.E.” doesn’t have the brains of a Le Carre novel or the gravitas of a 007 flick, it is a refreshing and fashionable spy thriller that breaks the mold in its competitive genre.