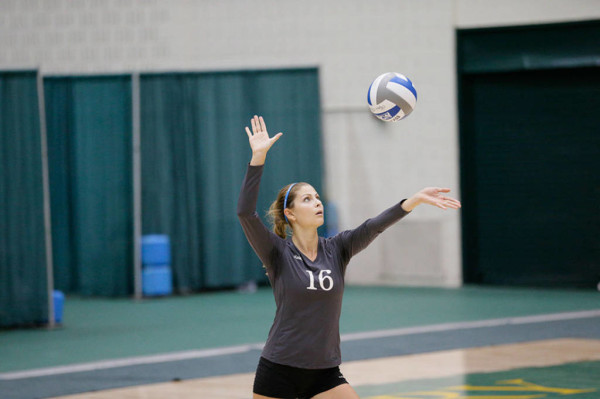 Things seem to be headed in the right direction for William and Mary, having taken two of three matches at this weekend’s Eastern Carolina University Tournament.

The Tribe had several contributions from both young players and veteran leadership, with freshman Heather Pippus and senior Desi Koleva earning spots on the All-Tournament team. Coming into the tournament, the College had lost three of its last four matches, with every loss coming in a full match of five sets. The narrative was flipped in the first match against Western Carolina, as the Tribe beat the Catamounts in five sets.

After cruising to 25-13 and 25-16 victories in the first two sets, William and Mary was unable to keep the match from going the distance, as Western Carolina rallied to win two consecutive sets of its own. In the final frame, the Tribe began with a 4-1 lead, only to see the Catamounts seize the upper hand with a 7-2 run that put Western Carolina up 8-6. With the match tied up at 10 points apiece, freshman Katie Kemp delivered three service aces to earn the victory.

With the match tied up at 10 points apiece, freshman Katie Kemp delivered three service aces to earn the victory.

Aces were a theme for the Tribe in the first match, as junior Gabrielle Pe served four of her own while sophomore Sara Zumbach tallied three. Pippus would set the tone for the rest of her tournament with her performance, as she recorded 14 kills and eight digs for the match.

The next day’s match against Hampton began at 10 a.m., not giving the College much time to recover from the five-set marathon the night before. After dropping the first set 20-25, the Tribe shook off fatigue and took the next three sets to win in four. The scoring gap widened with each set, as the Tribe won the second, third and fourth sets by scores of 25-22, 25-13 and 25-10, respectively. Koleva and Pippus helped lead the way again, with Pippus tallying 10 kills and 14 digs and Koleva providing a solid all-around performance with 12 kills, nine digs, two aces and two blocks. Junior Michelle Heath contributed nine kills and four blocks of her own as well.

The final match of the weekend would not prove as fruitful for the College, which lost in straight sets to tournament host ECU. Despite the 0-3 loss, each set was hotly contested, the scores of which were 25-27, 21-25 and 22-25, respectively. In addition, Koleva had a sterling performance with 13 kills, eight digs and three blocks in only three sets. Kemp also had a solid outing with 16 assists. The loss put the Tribe’s record at an even 5-5 and lifted ECU’s to 6-2.

The Tribe travels to Washington, D.C. for the American Invitational this weekend where it will face American, Virginia and Baltimore-Maryland County over the two-day event.