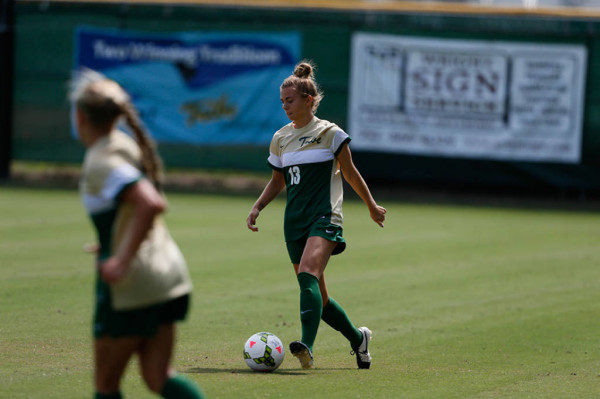 After edging Harvard to extend their unbeaten run to four matches, William and Mary (6-2-1) fell to a different Ivy League opponent in Princeton 2-1 this past Sunday. The overtime loss also broke the Tribe’s shutout streak, as they conceded a goal for the first time in four games.

The game opened up with Princeton controlling the offensive proceedings. The Tigers took six shots in the first half, while the Tribe didn’t shoot on goal until the 22nd minute. Senior midfielder Katie Johnston, who leads the team with four goals, forced the only save of the half from Tigers goalkeeper Hannah Winner. Princeton drew senior goalkeeper Caroline Casey into action twice in the period.

Princeton (5-3) finally broke the deadlock in the 48th minute. Forward Tyler Lussi was on the end of a give-and-go combination and finished near the right post to beat Casey for the first time in the past 375 minutes played. The Tribe has kept five clean sheets so far this season, and was on its way to tie the 2014 total of six before the goal.

William and Mary began to possess the ball more in the Princeton half after the restart. Johnston was off target on two shot attempts following the Tigers goal, and senior midfielder Leci Irvin’s shot had to be saved by Winner during the productive stretch for the College. The Princeton defense finally succumbed to the onslaught when a Tribe corner caused a scrum in the penalty box. Sophomore defender Haley Kent gathered the bouncing ball and finished past Winner to equalize for the College in the 71st minute.

Princeton defender Mikaela Symanovich nearly won the game for the Tigers in the 88th minute, but Casey made her third save of the match to send the game to overtime. Princeton didn’t waste much time however, as forward Mimi Asom scored from 18 yards out to send the Tribe home with a loss just under two minutes into the extra period.

The Tribe is now 3-1-1 in its last five games, three of which were on the road. Looking ahead, the Tribe will welcome alumna Jill Ellis ’88, the coach of the world champion U.S. Women’s National team. Ellis’ squad took home the trophy in Canada this past July, the third title in team history. The former Tribe student played forward for the women’s soccer team from 1984-1987, and was named a third team All-American.

Looking ahead, the Tribe will welcome alumna Jill Ellis ’88, the coach of the world champion U.S. Women’s National team.

Two home games lie on the weekend slate for the Tribe and Ellis’ homecoming. The Tribe faces Hofstra on Friday night at Martin Family Stadium at 7 p.m., then returns for an afternoon kickoff Sunday at 2 p.m. against Northeastern. These two matches kick off a crucial string of nine straight conference opponents leading up to the postseason. The Tribe will play three of its next four matches at home before hitting the road for four straight away matches to close the regular season.