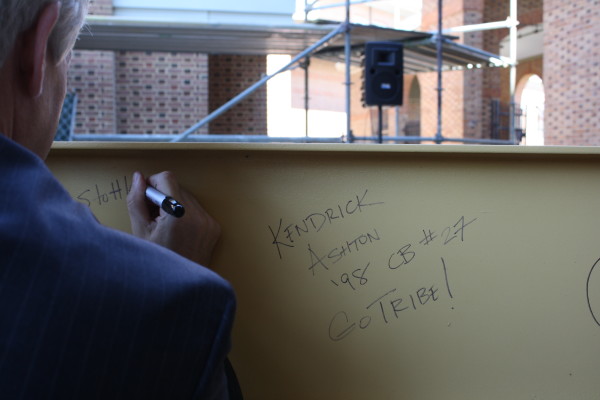 The Board of Visitors Committee on Administration, Buildings and Grounds met Thursday Sept. 17, largely discussing upcoming construction projects and proposals, as well as current and finished developments since the last BOV meeting in the spring.

“We have four projects on the main campus [at Gloucester Point] that are active at this time — a research vessel … a consolidated research facility … a replacement facilities management building … and we also have a replacement plan for our current oyster research hatchery,” Wells said.

Committee members listened to Wells’ speech as he outlined each plan. The research vessel captured the most attention, with the currently-budgeted $10 million boat in its contract drawing phase. This means VIMS and the College of William and Mary will be searching for companies willing to build the craft, which is slated for completion by 2017. Wells expressed that current global events are influencing this stage’s progress.

“My understanding is that with the price of fuel having fallen so much recently is that a bid climate for the research vessel in the Gulf of Mexico is really, really good,” Wells said. “Instead of having assembly in China, the climate makes us interested in internal projects.”

“One of the things we tried to do [with Chandler] is make sure we maintained the character of the old building such as the old-style trim while at the same time making it totally functional for modern use,” Jones said.

Wells then noted that the consolidated research facility is in preliminary design stages and estimated to cost $14 million, the facilities management building is also in preliminary stages and is estimated for $7 million and the oyster research facility is in a feasibility study and right now is estimated for upwards of $18 million. The speech was aided with state-of-the-art concept imagery, much of which has already gone through the Design Review Board.

The Committee took time to acknowledge that VIMS celebrates its 75th anniversary this fall and will hold its first annual “Oystoberfest,” a combined fundraiser and celebration on the VIMS campus during William and Mary’s homecoming weekend. Board members thanked Wells for his time, citing their appreciation for the programs at VIMS.

“VIMS is the darling of the General Assembly,” board member DeRonda Short J.D. ’78 said. “By and large, they are doing a wonderful job and the publicity they are generating is terrific.”

After Wells’ updates on VIMS, Senior Vice President for Finance and Administration Samuel Jones ‘75 M.B.A. ’80 began his report on the College’s projects.

Beginning with buildings that were finished in the summer, Jones showed images of Chandler Hall, the Pi Beta Phi sorority house and the former site of the Braxton House, while also addressing the addition of new graduate housing fire alarms and a new cooling ice plant. Chandler Hall is the first residence hall renovated in the Board’s new approach to renovations.

“It normally takes three summers to get [complete dorm renovation] done,” Jones said. “One of the things we asked the Board to do, particularly when we added what was the Hospitality House, now One Tribe Place, that gave us extra capacity, is to allow us to start take dormitories offline for a full academic year. So all of a sudden with a summer, an academic year and another summer, we can do complete renovations.”

According to Jones, a notable part of the renovation of Chandler Hall is the project’s dedication to keeping the traditional character of older College buildings while increasing ease and comfort for the students residing there.

“One of the things we tried to do [with Chandler] is make sure we maintained the character of the old building such as the old-style trim while at the same time making it totally functional for modern use,” Jones said.

The Pi Beta Phi house renovations include a new kitchen, new bathroom plumbing and fixtures, a large addition the function of which is to be determined, and modern air conditioning systems.

Committee members spent some time discussing the recently demolished Braxton House, a structure behind Sorority Court on Prince George Street. The demolition was slow and carefully controlled due to hazardous asbestos and lead paint waste. Currently, it is an empty lot slated to be seeded with grass. College President Taylor Reveley expressed the need for the lot to be developed into a new project soon.

“[The lot] needs to look good, because now the other side of Prince George Street looks great, and the city is very interested in us cleaning up our act on our side, as it’s gotten pretty bad,” Reveley said.

The other side of the street Reveley refers to is the new apartment complexes and shops along the street that have started leasing.

The meeting shifted from completed projects to current developments, including the third part of the Integrated Science Center, Tyler Hall, Zable Stadium, and the Plumeri Batting Facility.

With ISC-3, the project was said to be on schedule with plans and on-budget. In addition to the third building, construction has begun on building a greenhouse on top of ISC-2 to account for the loss of the Millington Hall rooftop greenhouse due to its slated demolition at the end of the ISC-3 construction.

Tyler Hall, which has been offline since the 2014 fall semester for renovation, earned a long-due update on its status. Jones showed photos of the building’s inside after most of the features were torn out.

“This was a complete gut on the inside,” Jones said.

Committee members were shown artist renditions and designs of the new building, which featured open-air atrium designs as well as a sense of modernity reminiscent of St. George Tucker Hall, ISC and Alan B. Miller Hall. While Jones had the attention of the board members, he added that $760,000 in additional funds would be needed on top of the budgeted $15.6 million.

“At this point, so much demolition has occurred within the building that we have seen everything that’s there and we’ve seen that some of the steel has corroded,” he said. “We’re really confident in the number, and the total budget includes equipment coming into the building to work on that.”

“If it’s here on campus and has been moved, changed or dusted off, we ought to go see it, because it is part of our responsibility to maintain this campus for the faculty, staff, students and visitors,” Baise said.

In terms of current projects, Jones transitioned to buildings in preplanning. Coming from the ideas in April’s Committee for Competitive Excellence Report, a $17-20 million basketball practice facility was said to be in design stages, as well as a $22-25 million athletics aquaculture center to account for the Division I men and women’s swim teams’ lack of independent facilities.

The committee members passed four resolutions unanimously during Thursday’s meeting, two of the proposals for significant changes. The College-owned Blank House on Wythe Lane was approved to be transitioned to the William and Mary Real Estate Foundation, with all funds going toward the biology department as per the original agreement for the College’s acquisition of the property. The scope and budget of the Integrative Wellness Center outlined in the Master Plan were revised, with an added $2.2 million (for a total of $12.2 million) requested and more square-footage than allocated.

As the meeting came to a close, Committee Chair Ann Green Baise spoke briefly about the BOV plan to sign a beam going onto the Zable Stadium addition later in the day and encouraged her fellow Board members to go out on campus and look at the ongoing and completed changes.

“If it’s here on campus and has been moved, changed or dusted off, we ought to go see it, because it is part of our responsibility to maintain this campus for the faculty, staff, students and visitors,” Baise said.