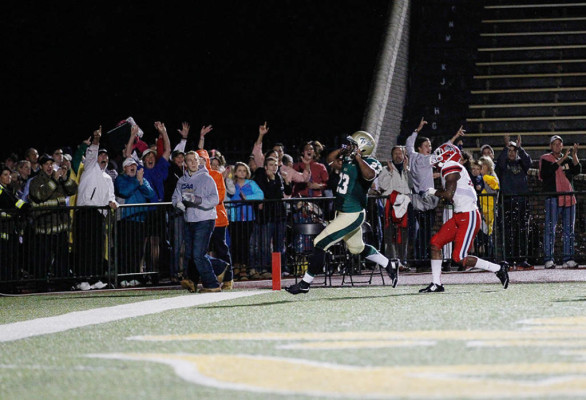 Coming off of a close matchup against Football Bowl Subdivision opponent Virginia, William and Mary had a week to regroup and prepare for its home opener against Stony Brook, which took place Saturday at Zable Stadium.

The visiting Seawolves (2-1, 1-1 CAA) were the recipients of the Tribe’s first shutout of the fall. Though the final score was 21-0, the College (2-1, 1-0 CAA) had several opportunities to put more points on the board and only allowed Stony Brook inside the Tribe’s 40-yard line once all game.

“It was really impressive,” head coach Jimmye Laycock said. “Really impressive in all facets. Offense, defense obviously and special teams. I told them that any time you shut someone out in this league, you’re really doing something. That was impressive.”

“It was really impressive,” head coach Jimmye Laycock said. “Really impressive in all facets. Offense, defense obviously and special teams. I told them that any time you shut someone out in this league, you’re really doing something. That was impressive.”

The tone was set early, as the Tribe marched down the field with ease after receiving the opening kickoff. Sophomore tight end Andrew Caskin hauled in a back-shoulder throw from junior quarterback Steve Cluley for 24 of his 37 yards on the day. Four plays later, Cluley and Caskin were on the same page again, with Cluley receiving tight protection from his offensive line, allowing Cluley to stay in the pocket until Caskin had found a hole in the defense to snag an 8-yard touchdown reception.

As evidenced by the score, the Tribe defense that stole the show Saturday, as it dominated Stony Brook from the first play. Seawolves running back Stacey Bedell came into the game as one of the top rushers in the country with an average of 163 yards per game, but he couldn’t find any holes all night, with Tribe defenders continually greeting him in the backfield. On the first play from scrimmage, sophomore defensive tackle Isaiah Stephens blew up Stony Brook’s offensive line and swallowed up the highly touted running back for a three-yard loss.

“I think the running back was leading the nation [in yardage], and, let’s see, he got about 28 yards, so I think we did a pretty good job against him,” Laycock said.

The defensive star of the game was Stephens’ counterpart in the trenches, senior defensive tackle Tyler Claytor, who recorded seven tackles, with 2.5 coming for a loss in addition to his 1.5 sacks. During two drives in the third quarter, Claytor sacked two separate Stony Brook quarterbacks. First it was Conor Bednarski, once for a nine-yard loss on third down to force a punt, followed by a sack with help from junior linebacker Stephen Lubnow on Seawolves’ backup quarterback Joe Carbone for a 10-yard loss. Claytor commented on how the defensive unit had been looking to make a statement all week against the Seawolves’ high-powered run.

“We just played out base defense,” Claytor said. “We said we’re going to go line up and play hard, fast, physical, and trust each other. That’s what we try to do every week.”

When asked if he thought that the defense had picked it up where they left off last week ago against Virginia, Claytor gave an exasperated smile before answering.

“I think we picked it up,” Claytor said. “I think if we had played like this last week we probably would’ve won.”

On the other side of the ball, it was the man who usually backs up senior running back Mikal Abdul-Saboor who defined the College’s offensive performance: junior running back Kendell Anderson. Anderson made the most of his 19 carries on the day with a career-high 191 rushing yards.

It was the man who usually backs up senior running back Mikal Abdul-Saboor who defined the College’s offensive performance: junior running back Kendell Anderson. Anderson made the most of his 19 carries on the day with a career-high 191 rushing yards.

Anderson’s first outburst came with a wild 28-yard score in the second quarter. After bursting through a massive hole gifted to him by the offensive line, Anderson lost his grip on the rain-slicked ball. It appeared that the opportunity may have gone by the wayside, but Anderson corralled the loose ball and, without breaking stride, continued towards the end zone, casually shrugging off a defender in the process and recording the College’s second score of the game. After the game, Anderson praised the offensive line.

“They played extremely, extremely well,” Anderson said. “That’s probably the best I’ve seen them play. They were opening up big holes, and once I would read, I would hit it. Coach challenged us in the meeting before the game. They had the No. 1 defense, what were we going to do?”

After three carries for 39 yards and a touchdown in the first half, Anderson took over as Abdul-Saboor played limited downs after injuries sustained last week.

After Stony Brook had put together its strongest drive of the game and worked its way to the Tribe 23-yard line, senior safety Jared Velasquez made a leaping interception of a tipped pass and returned the ball 21 yards, halting whatever momentum Stony Brook had managed to build up. Four plays later, it was Anderson who flattened the Seawolves for good, waiting for a hole to open up before surging through the line and easily running away from the rest of the defense for an uncontested 59-yard touchdown rush.

The Tribe travels to Delaware next Saturday for another CAA matchup. Kickoff is scheduled for 7:30 p.m. in Newark, Del.