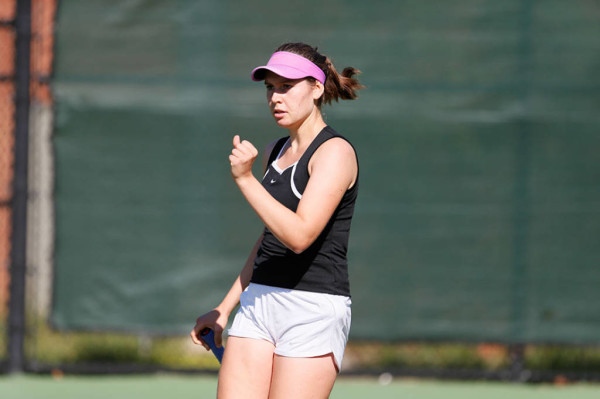 Due to inclement weather, play was cancelled on the final day of the South Carolina Fall Invitational Tournament. While the hurricane did prevent a few extra sets, it couldn’t take away from a weekend full of competitive singles play and individual success.

Early on Friday William and Mary arrived at the Invitational looking to establish itself early and continue its streak of strong singles play. They accomplished this goal with ease, securing wins in five of their first six matches against reigning Atlantic Sun champion North Florida.

Sophomore Olivia Thaler opened the Tribe’s impressive performance Friday with a straight-set rout, jumping out to an early lead and not allowing her opponent to recover. Overall, Thaler only dropped two games en route to winning 6-2, 6-0. A testament to the brilliance of Thaler’s performance was the quality of her opponent: Quetzali Vasquez, a Second Team All-Atlantic Sun selection who led her team with a whopping 25 victories last season. With the win Thaler secured her 20th collegiate victory and the first of this fall season.

Sophomore Olivia Thaler opened the Tribe’s impressive performance Friday with a straight-set rout, jumping out to an early lead and not allowing her opponent to recover. Overall, Thaler only dropped two games en route to winning 6-2, 6-0.

Junior Melanie Roy also found a good deal of success in her single matchups. Roy increased her streak to four single wins by defeating her opponent handedly 6-3, 6-1.  Like Thaler’s, Roy’s opponent Michele Valdez enjoyed a successful 2014-15 campaign, earning First Team honors and coming in second in her team’s rankings. Freshman Deepa Dhore and sophomore Cecily Wuenscher remained undefeated in singles play after a fantastic rally by Dhore helped her secure another win in a three-set match.

Friday’s doubles play got off to a rough start, as the Tribe dropped their first three matches in the category against South Carolina.  Although the results were losses, the College kept the team matches close, indicating that the squad could bounce back in the Saturday matchups. On Saturday, senior Julia Casselbury and sophomore Maria Groener earned a win in a hard-fought doubles set against the hosts. The doubles win put them at a 1-1 mark in the category overall.

Up next, senior Leeza Nemchinov competes in the ITA All-American Championships on Oct. 6, while the team plays next at the ITA Atlantic Regional Championships in Lynchburg, Va. Oct. 15-19.