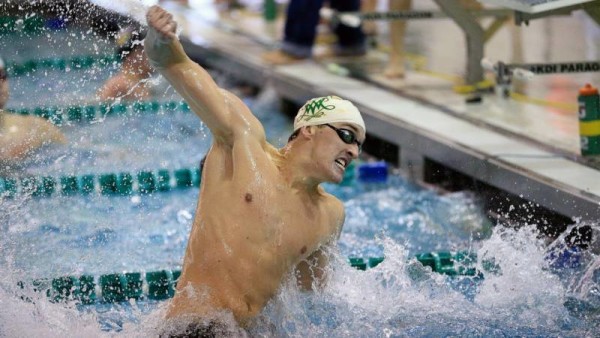 William and Mary gave an impressive start to the 2015-2016 season in a dual meet over the weekend, dominating Towson on both the men’s and women’s sides in Williamsburg, Va. at the Student Recreation Center pool.

The College won 10 of the 14 events. Senior Jeremiah O’Donnell — the 2014 CAA Swimmer of the Year — dominated in the pool for his three individual events.In the 100-meter breast, he swam a personal-best 55.79 seconds, the fifth-best time in school history. Additionally, O’Donnell broke his own dual-meet record for the 200-meter breast at a time of 2:03.54 before winning the 200-meter individual medley in 1:52.99.

The Tribe men also won both relays. Manion, O’Donnell, Barden and junior Joe Eiden combined to win the 200-meter medley relay in an impressive 1:30.88, the sixth-fastest in the history of the program. Manion, Eiden, Russell and junior Alex Montes de Oca teamed up to win the 400-meter free relay in 3:04.51.

This is the first time the Tribe women have won against Towson in 10 years.

The College won eight of the 14 total events. On the individual side, junior Sophie Rittenhouse won both the 100-meter and 200-meter back races in 58.34 seconds and 2:03.79, respectively. Sophomore Jess Crowley placed first in the 50-meter free with a 24.11-second finishing time. Junior Jaimie Miller won the 100-meter free 51.48 seconds. Senior Jessie Ustjanauskas won the 100-meter and 200-meter flys, cementing her status as a dominant competitor with respective times of 56.72 seconds and 2:05.72. In the 100 fly, the Tribe took the top four spots for a sweep of the event.

Just like the men, the women won both relays over the Tigers. Freshman Katie Sell, sophomore Annie Valls, Ustjanauskas and Miller combined to win the 200-meter medley in 1:43.34 to break the pool record. Senior Noelle Klockner, Ustjanauskas, freshman Emily Schroeder and Miller won the 400-meter free relay in 3:30.50.

The Tribe faces Georgetown in another dual meet at home Friday at 5 p.m.