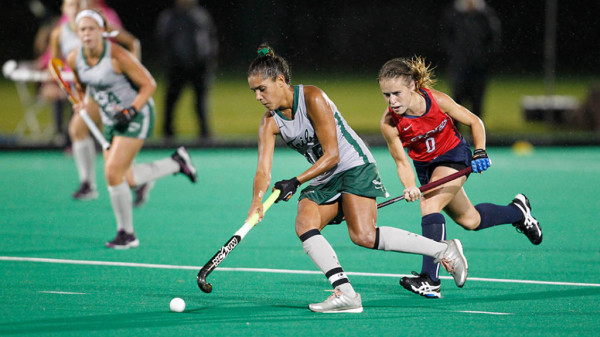 William and Mary was stunned in the dying seconds by Northeastern Friday night at Busch Field. The Huskies converted a penalty stroke in the final 10 seconds to take an insurmountable 2-1 lead.

Neither team was able to score in the first half, though both put pressure on the opposing goal. The Tribe (5-8, 1-2 CAA) put seven shots on net — four  of those coming in the seventh minute alone — while the Huskies (4-10, 1-1 CAA) shot six times. Senior goalkeeper Meredith Savage was forced into three saves for the College and kept Northeastern at bay though the first period.

Senior goalkeeper Meredith Savage was forced into three saves for the College and kept Northeastern at bay though the first period.

Early in the second half, the Tribe grabbed the opening goal. Junior midfielder Amanda McAteer struck a shot from the right of goal which rung off the post. The rebound fell to the middle of the circle where senior forward Pippin Saunders finished it off for her ninth goal of the season.

Northeastern forward Mia Martin scored off the bench to level the score, finishing a chance created by teammate forward June Curry-Lindahl, who tore through the middle of the pitch and centered the ball from the byline. Curry-Lindahl had seen her three chances saved twice and roll wide of the post in the first half, but was credited with the assist on Martin’s goal. Soon after, Savage made her final two saves of the half, keeping the Huskies from taking their first lead of the game. Huskies goalkeeper Becky Garner also made two saves, denying the Tribe from scoring off two penalty corners. William and Mary was able to create six chances in the last 25 minutes, but failed to capitalize.

Late in the match, Northeastern broke through as Huskies forward Abby MacLellan ran in from the left, causing Savage to leave her line. MacLellan went right and shot back across her body towards goal, but the ball hit a defender’s elbow on the way. The referee awarded a penalty stroke for the incident, which Huskies midfielder Kristin Abreu converted into the game-winning goal. In the waning seconds, William and Mary drove forward to take one last shot on goal, but were unable to put the ball on target.

In the waning seconds, William and Mary drove forward to take one last shot on goal, but were unable to put the ball on target.

McAteer led the College with four shots, and senior defender Peyton Smith finished with three shots on goal. Garner more than doubled Savage’s save total, recording nine saves to Savage’s four stops. The College put 12 shots on the Huskies net in the second half, but was only able to score on one of them.

William and Mary takes a road trip to Philadelphia next weekend, facing Drexel Friday at 6 p.m. before facing St. Joeseph’s Sunday at noon.