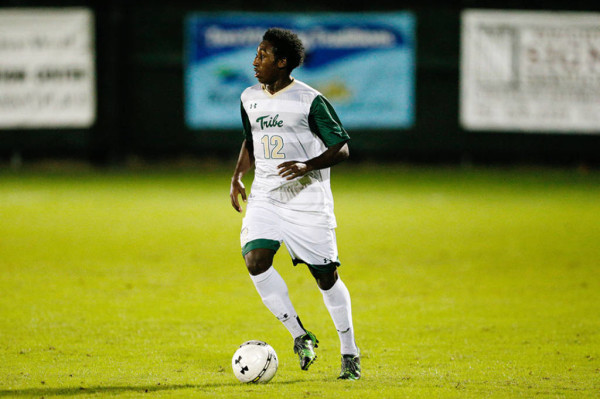 William and Mary (4-5-2, 1-3 CAA) fell 2-1 on the road to Northeastern (1-7-2, 1-3) over the weekend. A defense-heavy match with an exciting final five minutes that held all three of the matches goals ended with Northeastern taking home not only its first Colonial Athletic Association victory but its first overall win of the season. With the Tribe’s loss, both teams are now tied for the seventh out of nine teams after four games of conference play.

After two wild shot attempts by Northeastern in the first five minutes and another blocked in the 19th minute, the College offense tried to take charge of the match, led by forwards sophomore William Eskay and senior Jackson Eskay repeatedly taking shots. William Eskay shot first at 23:28 while Jackson Eskay fired at the goal at 25:30, but both were saved by Huskies goalkeeper Jonathan Thuresson. Senior midfielder Ryan Flesch took a shot of his own at 37:15, but it sailed wide left of the net. The Eskay brothers each took a shot in the last five minutes of the half, one went wide while the other was saved by Thuresson. Other opportunities to capitalize in the first period were stymied by two offsides calls against the College.

A scoreless first period led to an aggressive second period start for the Tribe but several missed opportunities limited its offensive options.

A scoreless first period led to an aggressive second period start for the Tribe but several missed opportunities limited its offensive options. A shot attempt by Jackson Eskay that went wide right led into a few minutes of spirited but fruitless College offensive pressure. Thuresson earned his keep in this one, adding three more saves in the 53rd, 63rd and 64th minutes.

The tide turned in the 74th minute with a wild shot by Northeastern that marked its second since the second period began combined with an offsides call against the College in the next minute, Immediately afterwards, redshirt freshman goalkeeper Sam Onyeader — the starter in the box for William and Mary instead of redshirt junior Mac Phillips — and the Tribe back four were put to the test with five successive Huskies shots in as many minutes. The last of the five was the sole shot on target; Onyeader made his lone save of the evening to keep the match scorless.

Northeastern pressed the pedal to the metal when it mattered most, as its shooting improved dramatically in the final minutes of regulation..

The Huskies established themselves on the scoreboard with less than five minutes remaining for a 1-0 lead as Northeastern midfielder Kevin Carvalho snuck a pass to teammate midfielder Ackim Mopfu at the top of the box, who fired after a quick touch over the Onyeader’s head.

The hosts put the match away two minutes later when Huskies forward Frantzdy Pierrot shot in a second goal assisted by forward Harry Swartz with 2:02 on the clock.

Berry’s first goal of the season came far too late, and the College dropped the match 2-1 to the previously winless Northeastern squad.

Freshman midfielder Marcel Berry scored the single Tribe goal in the 89th minute from the center of the box, assisted by William Eskay and redshirt sophomore midfielder Riley Spain. However, Berry’s first goal of the season came far too late, and the College dropped the match 2-1 to the previously winless Northeastern squad.

Thuresson led the game with six saves on seven accurate shots, while Onyeador only made one save on three shot attempts. Both teams shot evenly, the Tribe firing 13 while the Huskies shot 11 times. The two defenses also impressed with 85 minutes of scoreless play.

This Wednesday the Tribe takes on its next conference opponent with a trip to James Madison in Harrisonburg, Va. The match is scheduled to begin at 7 p.m.