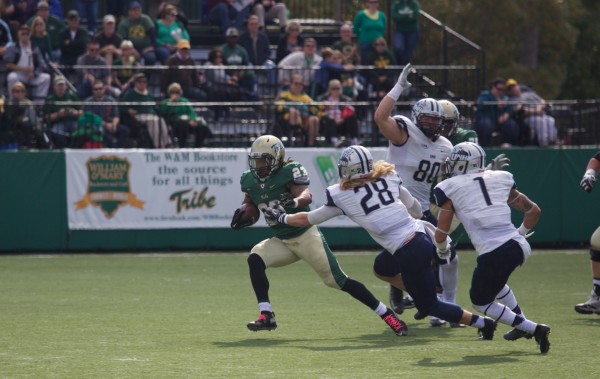 With No. 24 William and Mary trailing 15-14 to perennial Colonial Athletic Association powerhouse No. 19/20 New Hampshire late in the second quarter, senior linebacker Luke Rhodes, the heart of the Tribe’s defense, went down with what appeared to be a serious leg injury. Rather than lose focus after losing their captain, the College responded by rattling off 20 unanswered points to claim its second straight victory over a ranked CAA foe, defeating the Wildcats 34-18.

“I think it was remarkable how they stood in there and played,” head coach Jimmye Laycock ’70 said. “It’d be very easy to say ‘Oh no, poor us’ … which would have probably been natural, but those guys stepped in there and just kept battling and kept playing, and that makes you feel really good about the type of team you have when they can do something like that.”

“I think it was remarkable how they stood in there and played [without Rhodes],” head coach Jimmye Laycock ’70 said.

The Tribe (4-2, 3-1 CAA) defense, even without Rhodes for the majority of the game, consistently pressured New Hampshire’s (3-3, 1-2 CAA) star quarterback Sean Goldrich all afternoon, sacking him five times and forcing two interceptions. The Wildcats managed only one offensive touchdown on the game, a 37-yard run by running back Dalton Crossan, which put the College behind 15-7 after the ensuing two-point conversion. New Hampshire did not score again until a 27-yard field goal by Wildcat kicker Christian Breda with less than 10 minutes left in the fourth quarter, and by then the Tribe had the game in hand.

After racking up over 300 yards rushing in the home opener against Stony Brook, the College offense repeated the performance, gaining 325 of its 470 total yards against New Hampshire via the ground game. Junior running back Kendell Anderson got the majority of the snaps and delivered an outstanding performance, rushing 27 times for 174 yards and two touchdowns, including a 69-yard scamper less than a minute after Crossan’s touchdown run. Anderson added his second score with 2:05 left in the first half, punctuating a six-play, 60-yard drive with a 1-yard touchdown run to put the Tribe ahead 21-15, a lead they would not relinquish. After the game, Anderson applauded the work of his blockers.

“My hat goes off to the offensive line, the full backs and tight ends,” Anderson said.

“My hat goes off to the offensive line, the full backs and tight ends,” Anderson said. “The reason why we’ve been able to run the ball the way we do is because they’ve been killing defensive lines and getting up to linebackers and just opening up giant holes … I get the rushing stuff, I get all that, but it all goes to my offensive line.”

Even junior quarterback Steve Cluley did most of his damage on the ground, taking the ball into the end zone twice and setting up Anderson’s second touchdown with a 39-yard run down to the Wildcat 13. Through the air, Cluley completed 14 of his 22 passes for 145 yards and a touchdown, a 30-yard strike to sophomore wide receiver DeVonte Dedmon that essentially sealed the victory, putting the College ahead 34-15 with 12:21 to play.

The momentum of the game swung largely on several special teams’ plays. New Hampshire returned the opening kickoff to the William and Mary 36 yard line as several Tribe defenders missed tackles. This initial miscue only foreshadowed things to come, as with 10:40 left in the quarter Wildcat defensive back Casey DeAndrade darted past the College’s porous punt coverage for a 90-yard touchdown return to give New Hampshire the lead.

The Tribe special teams unit was able to right the ship in the second half, thanks to several miscues by New Hampshire’s Breda. Trailing by six midway through the third quarter, the Wildcats drove deep into College territory, finally stalling at the 3 yard line. Breda lined up to take the short 22 yard field goal but put his attempt wide of the left upright.

Later in the quarter, Breda was sent out to punt after a New Hampshire three and out. Receiving the snap from inside his own end zone, Breda fumbled the ball, picked it off the turf, and under pressure from sophomore safety Richie DiPietro II punted the ball two yards. Senior safety DeAndre Houston-Carson fielded the ball at the Wildcat 17 and ran it back to the 10, setting the Tribe offense up with utopian field position. Two plays later, Cluely ran the ball in from five yards out to increase the College’s advantage to 27-15.

“DeAndre’s got a great knack for timing those things and taking it off a punter’s foot,” Laycock said. “He just laid out and made a great play, and he takes pride in doing that.”

Breda’s next punt found Houston-Carson’s hands once again, but under different circumstances. This time Breda fielded the snap cleanly, but Houston-Carson flew in untouched and blocked the punt, which ricocheted out of bounds at the New Hampshire 30 yard line. The very next play from scrimmage, Cluley found Dedmon near the Wildcat goal line, and Dedmon sliced his way into the end zone for his fourth receiving touchdown. Laycock later commented on Houston-Carson’s big play.

“DeAndre’s got a great knack for timing those things and taking it off a punter’s foot,” Laycock said. “He just laid out and made a great play, and he takes pride in doing that.”

Overall the Tribe dominated the stat sheet, outgaining New Hampshire by nearly 200 yards, holding an over nine-minute advantage in time of possession, and not turning the ball over or allowing a sack. The College ultimately triumphed 34-18, its second straight victory over a ranked CAA opponent.

William and Mary returns to action next Saturday, Oct. 24 for its homecoming game against Hampton. It is scheduled to kick off at 3:30 p.m.