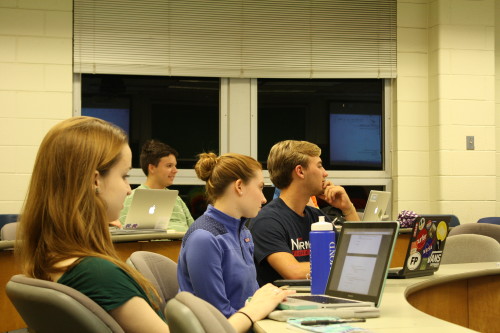 The Student Assembly Senate discussed changes to this year’s Charter Day schedule and confirmed a new secretary of outreach during its meeting Tuesday evening.

SA President Yohance Whitaker ’16 announced that there will not be a Charter Day concert this year and the $30,000 allocated for the Charter Day budget will be used as grants for student organizations who want to host Charter Day-related activities and for a potential school-wide Charter Day event.

Additionally, $50,000 will be taken from SA reserves for a concert that will be held later in the spring. SA hopes that Alma Mater Productions will match their contribution to the spring concert. In the past Whitaker said it had been hard to draw top tier artists to Williamsburg for the Charter Day concert.

“I am really excited to work with SA,” Thompson said. “I really am looking forward to what we have planned with outreach and working on transparency, as well as being more thorough when it comes to outreach in the coming year.”

Following Whitaker’s announcement about these changes to Charter Day, the senate confirmed the nomination of Hope Thompson ’16 as the new secretary for outreach.

“I am really excited to work with SA,” Thompson said. “I really am looking forward to what we have planned with outreach and working on transparency, as well as being more thorough when it comes to outreach in the coming year. I am really excited to take a little bit of experience and perspective from a variety of student perspectives and be more thorough in serving students and student organizations.”

Thompson focused on how she hoped to reach out to currently underserved groups on campus and show how SA can be of benefit to them.

“This event is still going to happen, the event is not going to be cancelled,” Ambrose said.

“Something I’m particularly interested in is transparency and making sure that students know what SA does, being proactive about making sure information about resources is out there,” Thompson said.

Class of 2017 President Katherine Ambrose updated the senate on the Tribe Turkey Drive, temporarily withdrawing the bill due to stipulations on funding. Stipulations on what the senate does with state funding prevents them from using funds for donations, but SA plans on finding a way to use their funds specifically for the event. The Tribe Turkey Drive will still occur as planned.

“This event is still going to happen, the event is not going to be cancelled,” Ambrose said. “We are trying to figure out the best way that SA and all the people we have already contacted can work together to create amazing things. This will just be a continual work in progress.”

Chairman of the Senate Dan Ackerman ’16 assigned the bill to the outreach, finance and student life committees for further discussion and revisions.

In a unanimous vote by roll call, the senate passed the Transport Transportation Act. This bill moves the secretary of transportation position to an undersecretary position in the student life department of the executive branch.