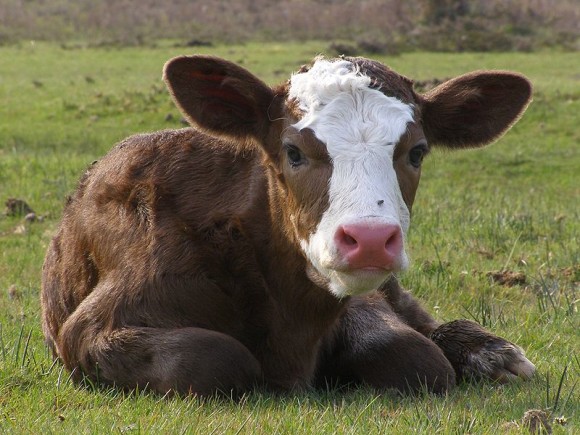 A dark auburn shape lay stretched out in the grass alongside a fence. The newborn Devon calf raised its curious head even before its mother roused herself from exhaustion. Welcome to the world, little one.

A trail of rubber gloves and an abandoned calf-pulling chain littered the grass from the truck to the place where the calving had occurred. Almost two hours beforehand, during a trip to the pasture to dip the navel of a calf that had been born that morning — an episode in which I spilled a bit of rust-red iodine on my jeans — another Devon had begun to calf. A miniscule hoof, unused to air and unsoiled by ground, had made its first appearance into a light the calf did not yet know existed. An hour after the first hoof and pastern had emerged, another joined the first. Calves typically pass through the birth canal in about two hours and make what the cooperative extension calls “visible progress” about every half hour. We decided to pull the calf.

As soon as I saw those two forelegs, however, I felt as comfortable as a vegetarian at a barbeque festival.

As a native of rural Augusta County, Virginia, the College of William and Mary’s more cosmopolitan population, deemed the Future Yuppies of America (members of the FYA) often listen curiously to my tales recalling rural life. The members of the FYA haven’t heard of the FFA — Future Farmers of America — in which all of the “it crowd” of rural high schools across America participate, nor have they experienced the onslaught of deciduous-forest-pattern camo which cloaks the halls’ inhabitants come hunting season. In the college environment, I’m an authority on life outside the metropoles. As soon as I saw those two forelegs, however, I felt as comfortable as a vegetarian at a barbeque festival.

Although I spent many childhood years around horses, I had never watched any animal give birth, and despite my interest in the process of butchering, I often experience doctor’s-office-induced nausea. Now, as the sun began to descend from the brilliant blue sky, I would have to help deliver another creature into the world. Almost numbing apprehension battled incredible enthusiasm for the task at hand, and in my usual fashion of resolving not to think about unpleasant notions, I forced myself not to dwell on either sensation.

At first I began by helping hold the heifer (a female cow who has not yet had a calf), and by her shoulders I could comprehend the events of the birth without a direct view while someone else pulled. This, I believed, was a perfect vantage point from which I could avoid the queasiness. The candy apple-colored bulk of docile muscle, even under her stress, continued to lumber slowly across the field as two of us attempted to steady her. The calf remained fixed in its spot in the birth canal.

“Can one of you come help me pull?” said a voice from the tail end.

Somehow the words “Sure, no problem” spilled from my mouth in an unconscious fit of disregard, and I gave up my comfortable spot forever.

In my involvement with the heifer and her calf, all other thoughts and apprehensions floated into the distant past.

Or, what I had regarded as a comfortable spot. Gloved fingers grasped at slippery pasterns as we each pulled a leg during contractions. In my involvement with the heifer and her calf, all other thoughts and apprehensions floated into the distant past. Purpose rendered qualms and discomforts irrelevant; they ceased to exist.

Sometimes a purple tongue and large soft nose poked out into the air with the hooves and pasterns, but they slid back into darkness after each contraction. The pull chain entered. I pulled out the front legs so that the shining metal links could be wrapped properly around a hoof. Finally, the heifer stretched herself out along the grass, swishing in the evening breeze, by the fence. She breathed with more intention. The contractions increased in frequency. With one last pull, head, neck and shoulders fell in an elongated lump on the ground. The rest of the calf followed to exclamations of enthusiasm.

The heifer had borne her first calf, and I had helped deliver my first critter.

Exhausted dam and calf lay with limp legs and necks in the same spots for several minutes. A chill had invaded the embracing warmth of the afternoon, and the cloud of dusk had stolen over the glowing sun. Only then did I remember that I had plans to meet friends that evening; I had lost track of time. In the age of technology, a quick succession of messages fluttered back and forth ending with “I have birth fluids and iodine all over me. Can we meet at our room so I can change?” A message that, I later learned, received many peculiar glances from strangers when one of its recipients mistakenly read it aloud.

On shaking stilts stopped with slippers of dainty ivory, the newborn stood in a stiff slouch, tensing her untested muscles.

Meanwhile, the calf raised its head even before its mother attempted motion. The spunky thing, still covered with remnants from its previous lodging, made several feeble attempts to stand. On shaking stilts stopped with slippers of dainty ivory, the newborn stood in a stiff slouch, tensing her untested muscles.

Her mother had risen during the calf’s first triumph and had walked a few yards away. The first-time mother curiously twisted her neck around to gaze in the calf’s direction as if to ask: “Aren’t you mine? Don’t you know to follow me?” The youngling, in its disproportionate state, tottered forth with feeble shuffles, ending in a tumble. It had either understood the look or knew instinctively its role as a shadow, its place in the world as a bovine.

The pair eventually met. Dam put her nose down to calf and prodded it from all sides. The prodding became shoving, and in an apparent denial of maternal instinct, the mother with a forehead spanning the length of the calf’s ribcage, lightly flung her calf aside. For a tense moment, the little heifer calf sprawled, dazed and dejected, in the grass. Then she stood and self-assuredly, but half-confused, tripped back to her mother. Again the dam pushed against her own offspring. The little calf, with her deceptively dainty design, threw her weight against the solidly-powerful head, pushing back in defiance.

A soft peal of laughter and a chorus of quiet cheers went up from the onlookers. Mother, too, must have inwardly approved or at least, in a spark of genetic recognition, realized her task at hand. Slowly, the mother exchanged pushing for cleaning, and a muscular tongue methodically sloughed off the remnants of the womb. After a bovine minuet, the calf discovered milk. Dam and calf were healthy and bonding.

After a bovine minuet, the calf discovered milk. Dam and calf were healthy and bonding.

We all walked away from the pair with contented smiles and lighthearted souls as we gathered our trail of cast-off delivery supplies.

Being a small part of this creature’s first moments of its independent life is the most rewarding thing I’ve ever done: not receiving an acceptance letter from a prestigious university, making dean’s list or even learning to parallel park a tank of an old Jeep — a skill which I will forever cherish. Those other things, people expected them of me as if I would manage them by inevitability. No one — much less myself — expected to hear the words “I delivered a calf today” issue from my mouth, but the girl who delivered a calf eclipsed the girl who almost fainted at the dermatologist’s office. I’m glad I found the girl who delivered a calf. She has a clearer head and a more optimistic heart. She has a deeper understanding of life and sustenance and food.