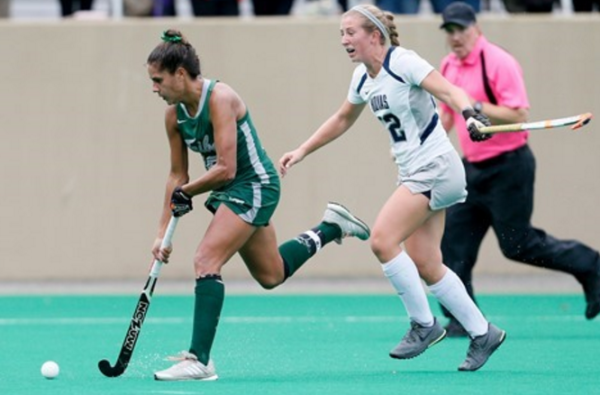 William and Mary ended its sour season on a bittersweet note this past weekend, falling 3-2 to Hofstra on Friday but then defeating Georgetown 3-1 at Busch Field on Sunday. The team said goodbye to some of its top senior stars who played their last games for the Tribe.

The College (7-12, 1-5 CAA) kicked off the weekend doubleheader against the Pride (14-5, 4-2) in rocky fashion. Hofstra scored just 11 minutes into the match, beating senior goalkeeper Meredith Savage off of a penalty corner. However, sophomore midfielder Emma MacLeod deflected a shot from senior defender Peyton Smith into the Pride net, tying the match at one goal apiece in the 29th minute.

Senior forward Pippin Saunders then added to her team-leading goal tally in the second half. Fellow midfielder sophomore Booter Ellis shot towards the near side, and Saunders got on the end and tipped the ball in to give William and Mary its first lead of the match.

Soon after Hofstra took advantage of two Tribe yellow cards. The Pride pulled their goalie, outmanned the College 9-on-12 and erased the WIlliam and Mary lead with two 66th-minute goals. Forward Stella Schoen scored her second goal and third point of the game to cap off Hofstra’s 3-2 comeback victory.

In Sunday’s season finale, Georgetown (8-11, 1-4 Big East) began the game on the front foot, putting pressure on the ball. Hoya forward Aliyah Graves-Brown sliced through the defense and saw her shot saved by Smith. However midfielder Sam Hickey finished off the rebound, giving her team an early lead.

Head coach Tess Ellis later called a timeout after Georgetown continued to threaten. To avoid the pressure the Hoyas were applying, the Tribe emphasized playing the ball back around Georgetown and getting in behind their defense.

After the restart, the College took control of the game. After Smith saw her shot get caught under the goalkeeper, MacLeod was able to dig the ball out and passed to sophomore midfielder Erin Menges to put the College on the board.

Within 48 seconds, Saunders had given the College the lead for the remainder of the game. She carried the ball through the circle and blasted a shot into the near boards for the 38th goal of her career.

“We are known for our fast attack, so we knew if we could feed the front line, we would get some shots,” Saunders said. “The midfielders also did a good job picking up the rebounds.”

In the second half, MacLeod was able to add an insurance goal. Her first shot was saved by the goalkeeper, who left the goal open for MacLeod to tap in the rebound for the 3-1 lead.

The win boosted the Tribe to a 7-12 final record, which placed them sixth in the  standings. Five William and Mary seniors will be graduating by the time the team opens the season next fall, meaning the spring will be key to the Tribe if they are to improve on the disappointing 2015 season.