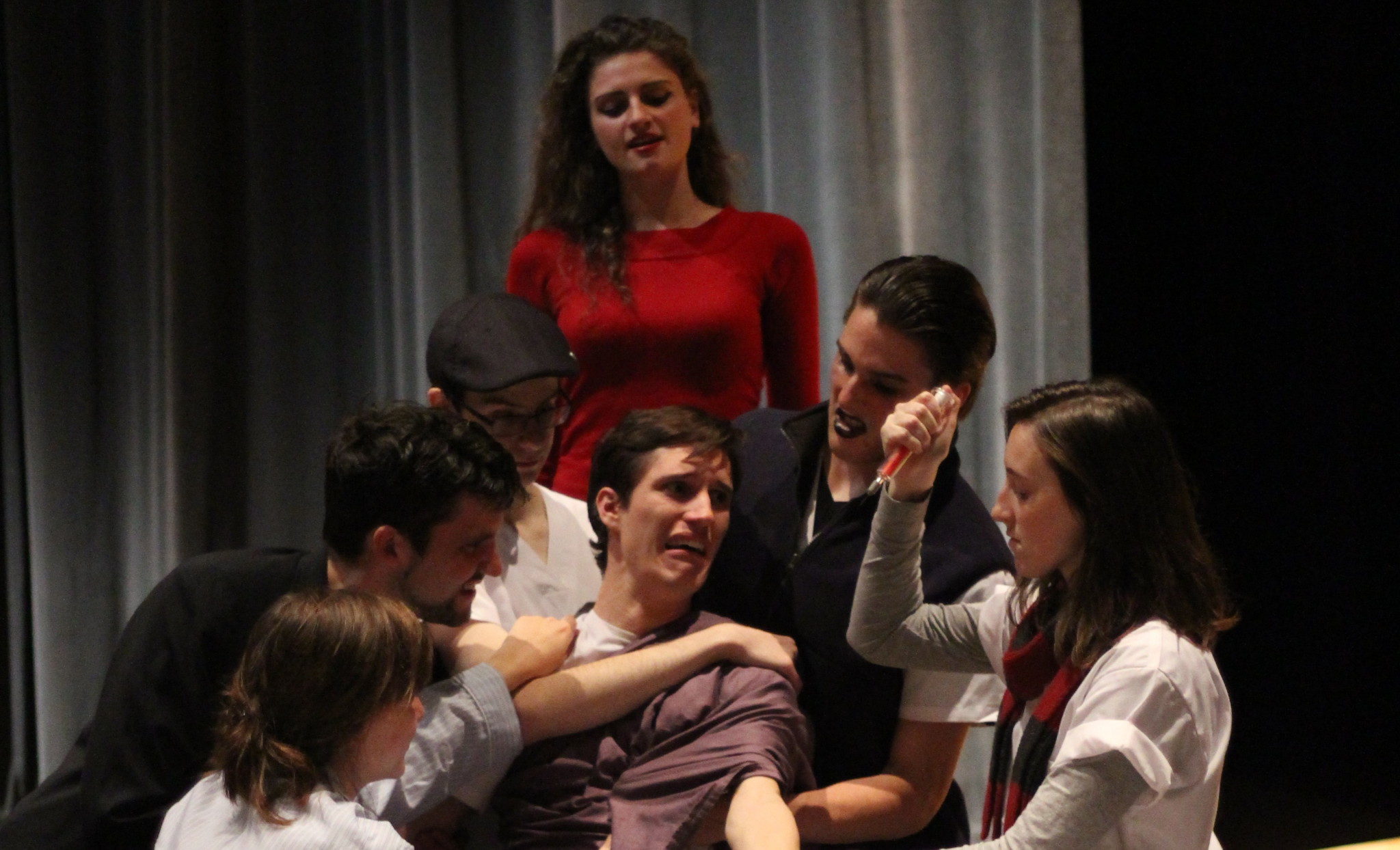 Desperation, ambition and loyalty can drive a man to madness — all of these forces were explored this weekend in Shakespeare in the Dark’s production of Julius Caesar.

One of several plays by William Shakespeare centered on events from Roman history, the show revolves around the assassination of Julius Caesar by those who wished to save Rome from his ambition, and the regret and guilt that plagues his former allies. Shakespeare in the Dark presented this classic tragedy in the setting of a mental institution as the characters grappled to come to terms with the consequences of their actions and the hidden desires of those around them.

Co-directed by Molly Earner ’16 and Abby Russo ’18, the production gave a unique take on the play. The show’s makeup added to the performance by transforming the actors into haunting specters, gaunt addicts and vindictive schemers, while costumes highlighted the show’s themes and emphasis without restricting the actors’ movement. While some actors lacked conviction at times, the cast managed the complex language and heavy themes, such as suicide and drug use, with aplomb.

The cast was able to convey a sense of tension and unease in their mannerisms that lent the show an overlying sense of urgency and discomfort that was immersive and fitting, despite linear and rigid staging. While most actors were easily audible, the actors’ screams during intense and climatic scenes had the tendency to drown out subsequent lines.

Shakespeare in the Dark’s strong acting talent continued to be its greatest asset, with many of the cast portraying strong and distinct characters. Ryan Vaughn ’19 presented himself as a menacing villain with his delivery and intimidating idiosyncrasies, while Daniel Burruss ’16 proved to be the show’s most physical and humorous performer. Additionally, Isabelle Baucum ’17 demonstrated the depth of her acting talent as both a loving wife and an impassioned citizen of Rome.

Trembling and pacing upon the stage, Isabel Steven ’17 carried the production as Marcus Brutus, her conviction and bodily presence playing well across from the treacherous Becca Stymes ’19, whose every move as Caius Cassius was dripping with dominance and careful calculation, adding polish to her performance. Jason Via ’16 succeeded in his performance of Mark Anthony by delivering one of the show’s most memorable monologues with a fiery conviction that resonated throughout the theater.

Sticking to their general aesthetic, Shakespeare in the Dark presented Julius Caesar with a minimalistic set. While some larger furniture pieces helped to set the scene, they often hindered actors’ movement about the stage. The technical aspects proved beneficial overall in that they emphasized the actors without distracting from the gravity of the play.

Shakespeare in the Dark took on the challenge of this weighty production and reinterpreted it in a manner that was both intriguing and compelling. While this unique take didn’t quite connect on all levels, the cast remained consistent, resulting in numerous stand-out moments that spoke to the power of student-led theater at the College.