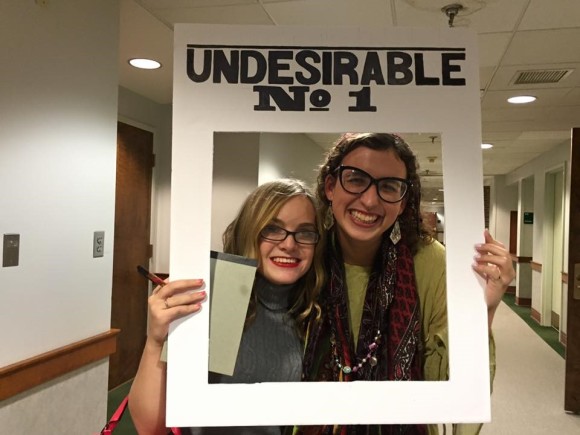 Hello everyone! A long time has passed since the previous installment of this very magical blog, but that just means there is more to update you on. Specifically, I want to tell you all about WizMug’s annual Death Day party, which happened last week.

“Death Day?” you ask, your eyes widening. “You call it Death Day?!” You take a small step back with fear. You already had a feeling these Harry Potter people were weird, but this just confirms it.

Relax, dear Muggles. That’s just what we call our annual Halloween party. It’s named after a party that Nearly Headless Nick threw on Halloween in the second book.

Death Day is always a blast; imagine a dorky dance party complete with costumes, Halloween decorations, wonderful food and all the past and present guilty-pleasure songs you can imagine. My favorite part is seeing all the creative costumes people come up with. Club members who come in Harry Potter-related costumes are eligible to participate in the costume contest, where people can win prizes (and eternal glory).

What are some of the things we do at Death Day other than the costume contest? Well, of course, there is a lot of dancing! Some of the houses even have their own dance traditions — the Heads of Gryffindor always run at each other from across the room during “Wrecking Ball,” while the Slytherins get on the ground and dramatically reenact that goat YouTube video whenever “I Knew You Were Trouble” comes on. This year our amazing social chair procured a bunch of balloons which made the dancing even more fun.

I’m a senior, and I’m going to miss Death Day so much next year. To me, it has always represented one of the most important things about WizMug: the freedom to be yourself. You get to dress up as your favorite (or least favorite) character, belt out songs ranging from “Bohemian Rhapsody” to “Burnin’ Up” by the Jonas Brothers and get closer to your fellow Harry Potter nerds. Plus, nobody cares if you can’t dance (that’s a big plus for me, guys).

As head of Slytherin Alexanna McTammany ‘17 puts it, “I love Death Day because there’s crazy dancing with no judging.” Putting ourselves out there and basically saying “Hey, we’re all nerds, so let’s make it fun” allows us to grow closer as a club and as friends.

Until next time, William and Mary! Stay magical.