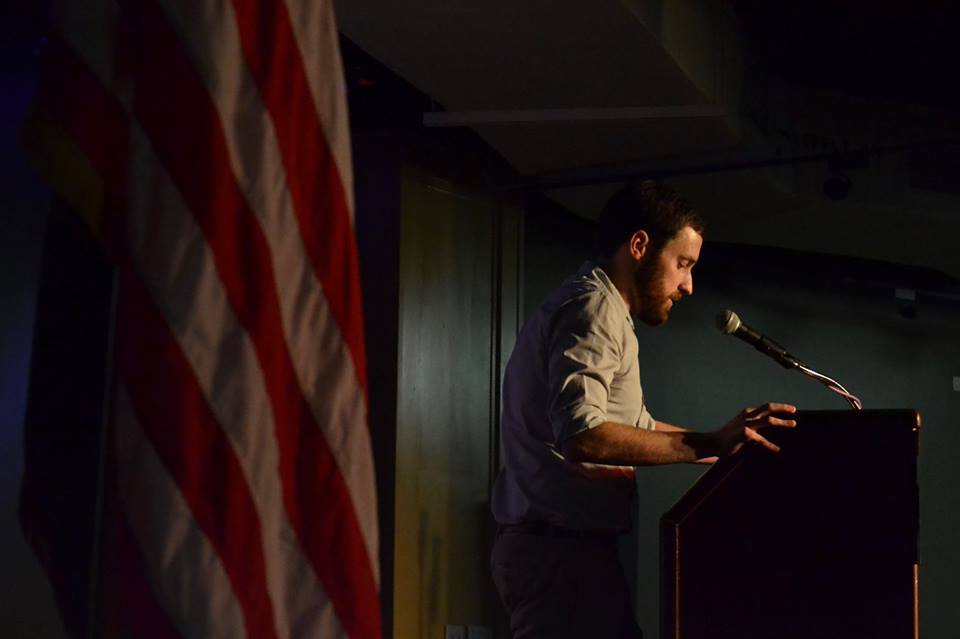 The room was solemn and quiet as Sebastian Munevar ’16 began his story. Lodge One went from a roaring social scene to a serene calm Wednesday, Nov. 11, and with the lights dimmed and the radio silenced, all present listened intently to service members’ experiences in commemoration of Veterans Day.

The stories told were not the graphic depictions of war some might expect; they were tales of family and support, of love and loss. The goal of the event was to help bridge the civilian-service member gap, according to Armed Services Arts Partnership founder Sam Pressler ’15. ASAP teamed up with Student Veterans of William and Mary and AMP to put on the event.

Munevar, president of Student Veterans of William and Mary, told the crowd about his return from Afghanistan as a wounded soldier.

“The most distinctive memory I have from my first year of marriage is when my wife, Andrea, nine months pregnant with our first-born son, came to Memorial Hospital in Colorado Springs to meet me after I’d been wounded and came home. She looked as beautiful as ever,” Munevar said. “It’s a hazy memory, but I remember being in bed hooked up to all of these machines and seeing her turn the corner, down the hallway of the hospital looking for me. That day for the first time in weeks I felt joy.”

He said that he fought with feelings of rage and inadequacy and uselessness, but that his wife was there through it all.

Munevar shared with the crowd his struggles after returning home wounded. He said that he fought with feelings of rage and inadequacy and uselessness, but that his wife was there through it all. Present in the crowd, she had a tissue in hand throughout his story.

Not all speakers were service members. Savannah Triplett ’18 is not in the military, but her father was. She spoke about him, and how she was just four years old when his ship was the target of a suspected terrorist attack in Yemen. She said that she was happy to have the opportunity to talk about him, because his death was a significant event in her life, but that it’s also hard to share with people. It’s not something to casually mention in a conversation, she said.

Assistant professor of military science MSG Steve Barker told another tale of family that drew tears from the crowd. Barker spoke in numbers. One thousand: the number of times he ran his mouth. Five hundred: the number of times he had to burn poop in Iraq. Fifty-six: how many months he has spent deployed, away from his family. For Barker, as with every veteran that spoke, family was mentioned often.

Then he said, seventy-four: the number on his eldest daughter’s hand. It was the number of times she had cut herself. He said he was deployed when his wife called, telling him not to worry, that she had it handled. Barker said he recognized how exhausted his wife was during times he was away, and that he was happy to be home, spending time with his family.

He told a story of two friends, students who finally noticed, who asked him the question he knew was coming: Have you ever killed someone?

Chris Fitzsimmons ’16 also highlighted the support he receives from his family and his girlfriend. Fitzsimmons enrolled at the College in the fall of 2006, but withdrew two years later to enlist. He told the audience about finding out that a friend from his hometown had died in combat, and how he eventually decided to withdraw from college and enlist. Fitzsimmons expressed the view that a number of student veterans touched upon — the worry that he would not fit in after returning.

That was Tim Beck’s ’16 concern, too. He said he tried to blend in with the rest of the students, hoping they wouldn’t notice he was a bit older than the rest. His story was of two friends, students who finally noticed, who asked him the question he knew was coming: Have you ever killed someone?

Beck said he felt the distance between them widening. He recounted how they told him they hadn’t accomplished anything compared to him. In disbelief, he said he then recalled a similar conversation with a soldier he looked up to, a member of an elite division in the army — the Delta Force — remembering that he had encountered similar feelings.

“I was told, ‘All that experience and struggle will set you apart,’” Beck said. “My experiences and trials were mere molehills compared to the mountains he had climbed.”

He said that, whether a college athlete or Delta Force, everyone has a story. Beck impressed on the crowd that his friends were wrong; they had accomplished great things, too.