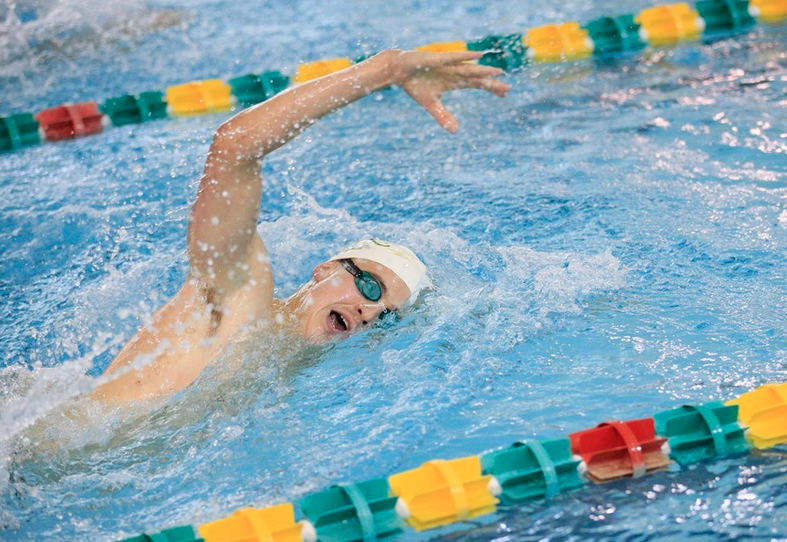 The William and Mary men and women’s teams swept the Bucknell Three-Day Invitational this weekend, as each Tribe team finished first over the nine other schools in attendance. The men’s team (5-1,3-0) totaled 1597 points, and the women’s (4-3,2-2) scored 1315.5 points.

The women’s team started strong, gaining an early lead Friday night. The Tribe won the 200 free relay, with freshman Katie Sell, sophomore Abby Mack, and sisters Annie and Jaimie Miller clocking in at 1:33:80. The Miller sisters also placed within the top four in the 50-yard free, junior Jaimie in third, and freshmen Annie in fourth. Other Friday highlights include freshman Maria Oceguera finishing third in the 500-yard free event and junior Allie Christy placing fourth in the 200-yard IM.

A Tribe record was broken Saturday when freshman Oceguera clocked in at 16.52.51, placing fourth in the 1650-yard free. Oceguera also placed fifth in the 200-yard fly. Rittenhouse broke a personal record and placed third in the 200-yard back at 1:57:80. Jaime Miller placed third in the 100-yard free and Christy placed second in the 200-yard breast. After placing second in the final 400-yard free relay, the Tribe finished with an emphatic lead of 96.5 over their head-to-head competitor Connecticut with Buffalo, Bucknell and Fordham behind them in the top five.

The men’s team’s closest opponent was Buffalo who finished with a 57-point lead over the Tribe Friday. Still, the Tribe finished 89.5 points above Connecticut and poised themselves for a successful weekend. Friday night highlights include a 400-yard medley relay win with seniors Will Manion, Jeremiah O’Donnell, Justin Barden and Billy Russell who finished in 3:16:95. The Tribe also placed second in the 200-yard free relay at 1:22:36. Manion and O’Donnell placed second and third respectively in the 200-yard IM and Russel placed second in the 50-yard free at 20.56.

The Tribe shined on Saturday, out-swimming the competition in five of the seven events. The Tribe took first in the 200-yard medley relay, 400-yard IM, 100-yard fly, 200-yard free, and 800-yard free relay. Manion and Russell contributed to both Medley wins and each won an event, 100-yard back and 200-yard free respectively. The second day ended with the Tribe in a strong lead of 1028 with Buffalo trailing behind at 927.5.

With 15 men placing into the finals Sunday, the Tribe finished on top in the tournament. Russell won the 100-yard free in 44.99 seconds and junior Joe Eiden placed third at 45.44. Sophomore Baker finished first in the 200-yard fly at 1:48:38. The Tribe finished the invitational with their fourth relay win when sophomore Kyle Neri, Eiden, Manion, and Russell won the 400-yard free relay.

The Bucknell Invitational closed out the fall season for the men and women’s teams on a high note. They will resume training in January when they prepare to continue their success in the spring.