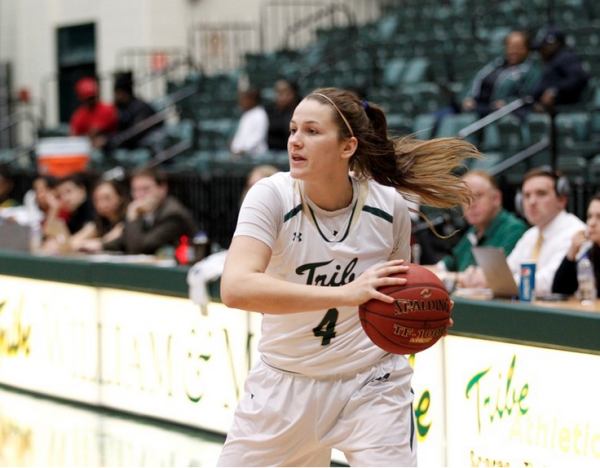 Two terrible quarters, the third against Hofstra and the first against Delaware, cost William and Mary two important Colonial Athletic Association contests over the weekend in Kaplan Arena, dropping them to 13-11 (4-9 CAA). On Friday, the Tribe fell 61-53 to the Pride after a third quarter collapse. On Sunday, the College fell to the Blue Hens 69-53 after digging a huge first quarter hole.

Against Hofstra (18-6, 9-4), the game was competitive from the start.  The teams traded baskets and the first period ended tied at 11. Junior forward Alexandra Masaquel was dominant for the Tribe, scoring six points in the period.  With the scored tied at 19 with just over four minutes remaining in the second quarter, the College took over, closing the quarter on an 11-2 run to take a 30-21 lead into halftime. Again, Masaquel was the catalyst for William and Mary. She scored the first five Tribe points of the run. After that, sophomore guard Jenna Green delivered a beautiful pass to senior guard Brooke Stewart, who buried a three to extend the College’s lead.

To start the third quarter, the Pride picked up their intensity. The Tribe simply couldn’t match it. Hofstra started with a 15-0 run that lasted over half the quarter. The first College bucket of the third quarter did not come until Green connected on a short jumper with 4 minutes 23 seconds to go in the period. Even though the scoring drought was over, William and Mary could do nothing to stop the Pride, getting outscored 27-6 in the third period and entering the final quarter with a 48-36 deficit.

In the opening minutes of the final period, the Tribe looked as if they were going to come back to take the win. William and Mary was aggressive and worked hard to get the ball to Masaquel, who capitalized by scoring time and time again in the paint. After a layup from freshman forward Ali Engelhardt, the Tribe trailed by just five, 54-49, with 3:22 remaining. From there, Hofstra executed well and knocked down free throws, halting the College’s comeback attempt and dealing them a tough loss.

Masaquel’s performance was terrific, but she had little support from her teammates. Masaquel finished with a career-high 24 points to go along with nine rebounds and three steals. The next highest Tribe scorers were Green and Engelhardt, who each finished with six points off the bench.

The College also continues to feel the impact of the loss of sophomore center Abby Rendle, as they were again beaten on the glass. Ultimately, they were out-rebounded 49-37. Swanson was displeased with the work on the glass, but was quick to credit Hofstra.

“They did a great job of beating us up inside,” Swanson said. “We missed a few key rebounds down the stretch.”

Against Delaware, the Tribe did not come out strong defensively. In the first quarter alone, the Blue Hens knocked down four open three pointers in route to 28 first quarter points. Even though William and Mary was effective scoring the ball, the defensive lapses created what would ultimately be an insurmountable deficit. Masaquel was again the primary scoring threat, putting up six for the quarter. The Tribe entered the second quarter down 28-19, but it went downhill from there.

The College offense struggled in the second quarter, while Delaware kept up its hot shooting start. By the end of the half, the Blue Hens’ lead had ballooned to 17, with the score at 45-28.

While the defensive performance was significantly better in the second half, the offense still struggled. Certainly not helping this case were the three third-quarter fouls called on Masaquel. By the end of the third quarter, the Tribe had not managed to cut into the Delaware lead, as they trailed 54-39.

In the final period, William and Mary again struggled to find offense, resulting in a 69-53 loss.

Masaquel finished the game with 14 points on an impressive seven for eight shooting.  Junior guard Marlena Tremba finished with 11, but shot just four out of 15, including one of eight from three.

The College was again outrebounded, 37-23. In fact, Green, who stands just 5’7, was the Tribe’s leading rebounder with six. Apart from Green, the entire Tribe team will need to pick up the rebounding in the coming weeks. Four of the five opponents remaining for the Tribe boast superior rebounding margins.

Despite the four-game losing streak, Swanson was encouraged by the play of sophomore forward Jeanne Gaumont, who was inserted into the starting lineup against the Blue Hens.

“Jeanne has been doing a great job finishing off defensive plays. She leads us in taking charges and she’s becoming much more of an energy-type player for us,” Swanson said. “We’re looking at a lot of different things, and her in the starting lineup was pretty good. I thought she had a great stat line.”

The Tribe will hit the road for two straight conference contests, facing conference leader James Madison Friday at 7 p.m. and the College of Charleston Sunday at 2 p.m.