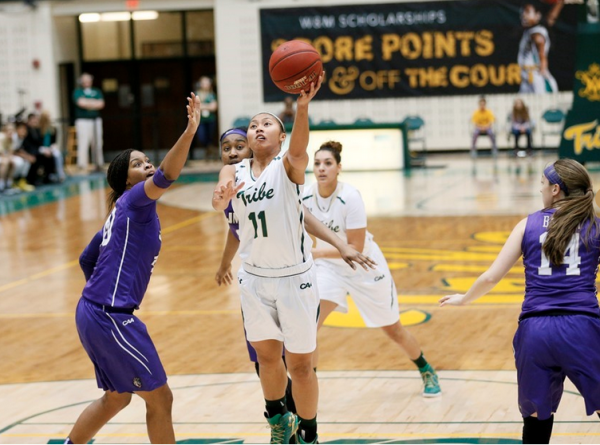 The fates of James Madison and William and Mary have diverged sharply since the Tribe beat the Dukes in an overtime thriller at the beginning of January in Williamsburg. JMU hasn’t lost since then, maintaining a winning streak of 11 games, and is now top of the Colonial Athletic Association. Meanwhile, the College has won just three games and lost nine. Lost too was their starting center, sophomore Abby Rendle, who averaged 13.2 points per game and spearheaded the victory over the Dukes. She has not played since January 22 because of an injury. Friday, the two teams met in Harrisburg with James Madison predictably emerging the comfortable victor, 83-63.

Once James Madison (20-5, 13-1 CAA) won the tip, there was only ever going to be one winner and indeed the Dukes led the entire game, never trailing after center Kayla Cooper-Williams’ first-minute layup. The Tribe (14-12, 5-10) could not score until four minutes in. Even when they defended well, William and Mary could not catch a break. A missed three by JMU guard Jazmon Gwathmey was claimed by the Dukes, and though sophomore guard/forward Jeanne Gaumont swept in to block Cooper-Williams’ follow-up, another offensive rebound fell to James Madison’s leading rebounder, forward Da’Lishia Griffin. Griffin laid the ball in, kick-starting a 12-point run to close the first quarter.

Only junior forward Alexandra Masaquel had scored more than 3 points (she had 10) and the College was shooting just 24 percent from the floor.

By halftime, the Tribe trailed 43-19 and the game was essentially over. Only junior forward Alexandra Masaquel had scored more than 3 points (she had 10) and the College was shooting just 24 percent from the floor. No bench players had scored.

The Tribe played competitively in the second half, outscoring JMU 44-40, but the early hole they dug themselves into was too deep to overcome. The game was lost on the inside. The Dukes do not lead the CAA in rebounding without reason, averaging 45.3 rebounds per game but pulled down many more on Friday, including 32 in the first half. During their last meeting, the combination of Rendle and Masaquel was able to pull down 25 rebounds between them, nullifying JMU’s advantage. Missing Rendle this time, however, the College could only muster 31 rebounds to the Dukes’ 52. Griffin had 18 boards by herself.

Griffin and the Dukes’ forwards dominated on both ends of the floor. 20 points following offensive rebounds and 38 points in the paint suggest the Tribe just could not stand up to the inside presence of JMU. The Dukes’ shooters did not have a particularly hot night, only converting 40% of their attempts, but the sheer volume of shots ensured that some were bound to go in. The Dukes had four players in double figures.

Despite the setback Masaquel had another strong game, collecting five rebounds and scoring 17 points to put her in double digits for the tenth time in 11 games. Shouldering a larger offensive burden due to the absence of the 6’4” Rendle, Masaquel continues to show a variety of offensive skills. Junior guard Latrice Hunter and freshman guard Bianca Boggs (both starters) struggled, combining to shoot 4-15 with 14 points. Boggs, a three-time CAA Rookie of the Week, also turned the ball over four times, though she did compensate with five steals.

The loss marked a season-high five in a row for the Tribe, the College slipping toward a .500 record after beginning the season at a 12-5 mark. The losing streak came to an end Sunday however, as the Tribe trounced College of Charleston (9-16, 4-10) 66-40. William and Mary dominated from the outset, jumping out to an 18-8 lead after the first quarter, and put the game away in a lopsided 24-7 third quarter.

Masaquel and junior guard Marlena Tremba anchored the offensive attack, scoring 18 and 19 points respectively. Masaquel also grabbed 10 rebounds to record her sixth double-double of the season. As a team the Tribe shot almost 53 percent from the field, getting 18 points from the non-starters.

All the more impressive was the performance on defense. After allowing a season-high 83 points to JMU the College held the Cougars to just 40 points, the fewest allowed in the Ed Swanson era. Charleston shot just above 27 percent from the field, failing to knock down any of their 13 three point attempts.

The Tribe earned a 10 point lead heading into the locker room, the first such lead in the past three contests. A 24 point effort in the third quarter added distance to the advantage, proving lethal to Charleston’s chances as the Tribe defense allowed just 7 points. Charleston’s scoring offense, ranking next to last in both average points and field goal percentage, failed to muster the necessary points for the comeback with just 14 in the final frame. William and Mary finally broke the five game losing streak dating back to Jan. 31.

On Friday the team returns to Williamsburg to take on struggling Towson. Tip-off is scheduled for 7 p.m.