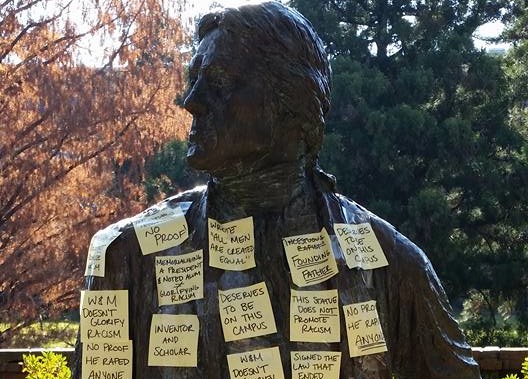 In light of recent controversy on campus, the William and Mary Debate Society held a debate on the resolution, “Resolved: Remove the Thomas Jefferson Statue from Campus,” Tuesday, Feb. 23. A vote by those in attendance, held at the end of the debate, determined that the side arguing not to remove the statue to be the winning argument. This debate is part of the Debate Society’s initiative to include the public and discuss topics relevant to the College.

In November, students covered the Thomas Jefferson Statue with post-it notes that called into question Jefferson’s history as a slave owner and his alleged sexual relationship with his slave Sally Hemmings. Since then there has been controversy as to whether or not the College should remove his statue.

Members of the Debate Society as well as audience members took the podium to share their beliefs on what the statue represented and what the College should do. Debate Society members Jerusalem Demsas ’17 and Gerry Jamison ’17 argued that, along with many other reasons, it is important to remove the statue to protect the mental health of students who have been affected by racism or sexual assault.

“The greatest obligation the college has it to its current students, because we have the greatest impact on the College today,” Demsas said. “The statue has the greatest impact on the students who go here. When the College makes decisions it ought to care about these individuals the most. When making this decision, it needs to do two things. The College needs to look at the legitimacy of the claim and see if it’s causing harm, and then we need to balance the harm against the benefits that some are claiming.”

Demsas also said that in contextualizing this conversation on the statue, it is important to remember that recently several Title IX violations have been filed at the College and a conversation on race has led to the creation of a Race and Race Relations Task Force.

If we focus on slavery, we have to prove that he was better than his contemporaries and compatriots. This is a man who was an advocate of the end to the slave trade, an advocate that slavery should not be expanded into the Western Territories, a man who freed Sally Hemmings’ children and a man who prevented and blocked laws that would have forced freedmen to leave the state of Virginia. These actions helped the abolition movement. — Venu Katta ’16

On the other side, Debate Society members Ciera Killen ’18 and Venu Katta ’16 argued that it is important for the College to keep the statue where it is for two reasons: to not deny Jefferson’s contributions to religious freedoms and academia and to not drive away donors.

Katta also said that while Jefferson owned approximately 600 slaves, he was an advocate for abolition. Additionally Katta brought up that by advocating for religious freedoms, Jefferson did more to include peoples of different religions than to harm individuals. This religious freedom, he argued, has had reaching impacts into reducing discrimination against members of the LGBTQ community.

“If we focus on slavery, we have to prove that he was better than his contemporaries and compatriots,” Katta said. “This is a man who was an advocate of the end to the slave trade, an advocate that slavery should not be expanded into the Western Territories, a man who freed Sally Hemmings’ children and a man who prevented and blocked laws that would have forced freedmen to leave the state of Virginia. These actions helped the abolition movement.”

Thomas Jefferson allowed religious liberties for people and advocated and increased education for people, but he is not talking about all people. — Gerry Jamison ’17

Jamison, in response to Katta’s argument, also brought up that Jefferson’s actions fundamentally went against the rights he advocated for in the Declaration of Independence.

“Thomas Jefferson allowed religious liberties for people and advocated and increased education for people, but he is not talking about all people,” Jamison said. “I don’t believe slaves on a plantation could go to the mosque or to the church. I don’t believe Sally Hemmings could go to the best school at the time or that the other slaves he was having sex with had access to good education. He perpetuated a culture, a systemic oppression that forced people to go to worse schools than everybody else at the time and he enshrined education for some people at the expense of others, fundamentally hurting the notion of education. That is not something that deserves to be honored.”