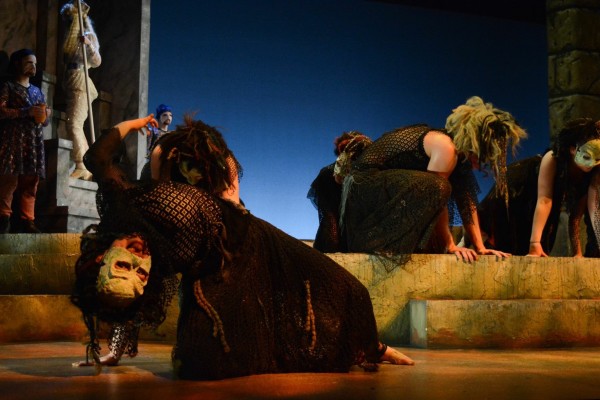 Ancient sins come to light in the College of William and Mary’s jolting, screeching and careening production of “Oresteia” which ran from Feb. 25 to 28 at Phi Beta Kappa Memorial Hall.

After more than 30 years of producing, directing and acting in theater productions at the College, theater professor Richard Palmer leaves his final mark with this vast and detailed performance that skillfully captures the nuances of classical Greek theater. A trilogy of Greek tragedies written by Greek playwright Aeschylus, Oresteia tells the mournful tale of the cursed House of Atreus, besieged by treachery, murder and revenge following the Trojan War. When Orestes returns to his home of Mycene to find that his father has been murdered by his adulterous mother, he plots his swift and violent revenge. The ensuing tale of sorrow and damnation is one that enchanted the audience for the entirety of the lengthy performance.

The show’s actors presented their characters convincingly, with few exceptions, and showcased the department’s ability to adapt to and present a variety of theatrical genres.

Overflowing with emotion and bellowing with strength, “Oresteia” was all-encompassing and momentous in its every detail. With very few dragging moments, the show was immersive, captivating and never lacking stylistically. The show’s actors presented their characters convincingly, with few exceptions, and showcased the department’s ability to adapt to and present a variety of theatrical genres.

The show’s costumes were excellently crafted to reflect the themes of ancient Greece. From colorful flowing robes to the divine adornments of the gods, each character’s wardrobe added depth and vibrancy to an otherwise dreary story. Another, and possibly the most distinct, detail of the show was its use of masks to conceal the faces of the actors and cast them as a chorus of haunted souls. Each mask simultaneously served to detach this ancient and enduring story from the individual actor and to allow the audience to become more absorbed by the show’s themes and characters.

The cast made excellent use of props in the performance by fully incorporating them into their movements and dialogue. While some of the larger props proved unwieldy at times, producing noise that drowned out several lines, each served its purpose and contributed to the overall aesthetic of the characters who wielded them.

The play’s greatest strength was the fervor demonstrated by its many choruses, a traditional aspect of ancient Greek theater. With a number of actors playing masked roles in multiple ensembles, the cast truly demonstrated its versatility and endurance. The synchronicity of the surprisingly vivacious chorus of elders started the show off on a strong note, each actor presenting an authentic character while maintaining an upbeat pace throughout the play’s wordy first scene. Writhing and screeching upon the stage were the chorus of furies; grotesque yet unsettlingly graceful, this careening mass brought great momentum to the show as they harassed Orestes and challenged the audience to condemn him for his matricide.

Building upon the strength of the ensemble, Joey Ernest ’17 provided a breath of fresh air as Orestes. His humor was well-placed and worked to accentuate the dramatic elements of the weighty play. Associate theater professor Francis Aguas as Clytemnestra gave a powerful and full-bodied performance, grasping at the air and teetering in voice and stature upon the precipice between reason and decay. Similarly, Sarah Marksteiner ’19 as Cassandra contributed to a sense of instability in the show’s characters. A very physical actress, Marksteiner spoke with force but moved like a woman hollowed by grief. Marksteiner also presented a thoroughly contrasting character, the goddess Athena, alongside Clive LePage ’18, who played the god Apollo. Both performed admirably, reciting wordy monologues without tiring.

The set of “Oresteia” was as imposing as the Greek gods themselves. The lofty structures were spared no detail, forming a gargantuan space of stone and marble. Dynamic use of platforms allowed the actors to place themselves in unique spots across the stage and literally accentuated the highs and lows of the action. Distinct lighting effects were very well-timed and executed in order to produce numerous eerie sensations during the show’s most sinister moments.

Having begun his career at the College with a Greek tragedy, it is only fitting that Palmer’s final production echo the legacy of a play that has stood the test of time with a performance that will long be remembered.