Home Latest News When Fish Steak Is Not Enough 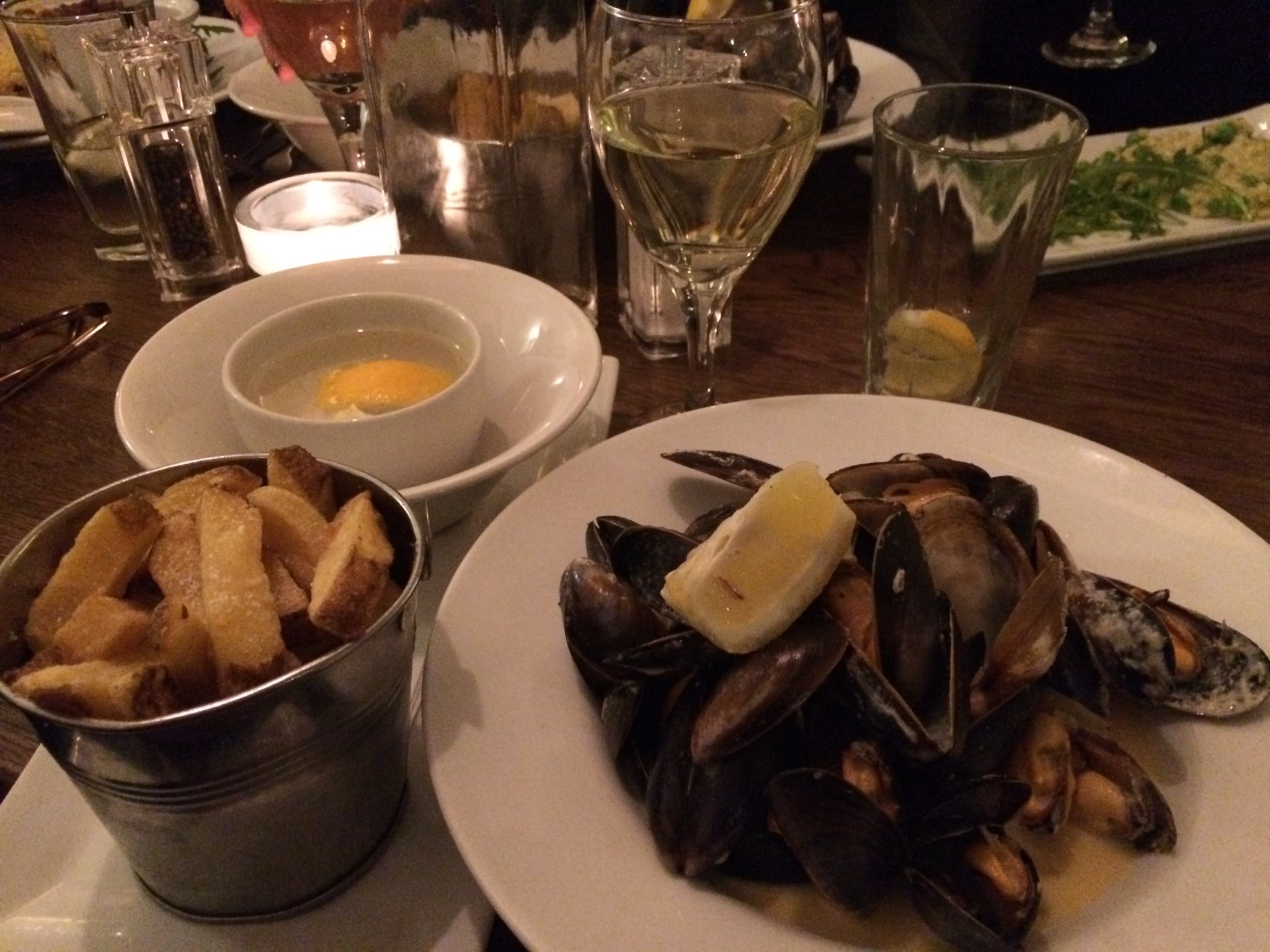 If Augusta County, Va. does one thing well — besides boasting the prettiest folds of rolling hills in the state — it’s raising steers. Innumerable photos of my peers holding halters attached to lumbering bulks of soft muscle with scrubbed-down, blown-out, and fluffed-up hair graced my Facebook news feed during the springs and summers — showing and market seasons — of my high school career. Every few weekends, my family drove out to a butcher’s shop near Middlebrook to procure rib eyes thicker than the AP Calculus textbook I pretended to use in the eleventh grade; if we arrived early enough, we’d watch as sides of beef hanging from hooks swung through the back door on a conveyor belt.

A good slab of seared and well-rested beef with a globe of Brian Loring’s bright pinot noir makes for a mighty tasty meal. My body goes through red meat, red wine withdrawal about every two to three weeks, and I must indulge again. Now I’ve been in Scotland — the land of mackerel and mutton — at the University of St Andrews for almost a month and a half, and somehow the sea has managed to satiate my protein cravings.

My body goes through red meat, red wine withdrawal about every two to three weeks, and I must indulge again.

The ancient spires and steeples of St Andrews rise above the North Sea from rocky dunes and cliffs. A walk along the pier, a solid structure of work-worn rocks that juts into the harbor, takes those brave enough to confront fifty-foot drops into watery nothingness out into a world of blue. I summoned extra intestinal fortitude as I climbed a rusting ladder at the tip of the pier onto the structure’s upper portion and at the top looked out and contemplated the long swim across the sea to Norway but then looked back and wondered if I was staring at what I imagine Maine’s harbors to look like. Piles of oft-used crustacean catchers sat on the docks and looked down on picturesque fishermen’s boats bobbing in the harbor’s still waters. A row of buildings the colors of coral and sand completed the scene. I remembered I stood in Scotland only when I raised my eyes to the cathedral ruins on the skyline.

If I were going to consume finned and shelled protein, St Andrews looked like place to do it. With a wary eye on the UK’s mad cow disease situation — a problem they’ve significantly ameliorated in the past decade — I turned my attentions toward the sea.

Most mussels I’ve eaten in the United States come from Canada’s Prince Edward Island. As much as the elegance of the bivalves nestled in beckoning blue-black shells entices me to try them, I’ve never particularly enjoyed this mollusk. Even doused in the traditional sauce of butter, white wine, and shallots, the mussels remind me of the mouthfuls of saltwater I involuntarily ingested as a child during summer vacations at the beach. After each unpleasant experience with an unfriendly wave — a frequent experience to a child of less than a hundred pounds — I’d remain in the water only to subject myself to another dose of sinus-cleaning saltwater. Mussels lure me into their trap in much the same fashion: If I see moule frites on a menu, I’ll order them — or strongly consider the possibility.

Even doused in the traditional sauce of butter, white wine, and shallots, the mussels remind me of the mouthfuls of saltwater I involuntarily ingested as a child during summer vacations at the beach.

A few weeks ago at West Port, a restaurant tucked right behind the entrance to what once served as the town wall, the menu dangled the option of mussels in front of me like a hot coal: tempting but dangerous. I fell for the crustaceans yet again, although I admit that a craving for crispy, salty frites played a large part in my decision, and I selected a glass of chardonnay to accompany the traditional butter, shallot, white wine bath. The waitress set a tub-sized bowl heaped with shellfish before me. The elegance of the dusky shells swimming in a pale yellow pool still worked their magic. After the obligatory preliminary fry — or shall I say chip? — dipped in buttery heaven, I took up the small fork and pried the foot from the first shell of the mussel and braced myself for flashbacks to childhood vacations. Instead, the soft, suede-like texture of the mussel, the subtle flavors of the sauce, and a light saline quality melted on my palate. I promptly repeated the process until the extra bowl meant for empty shells overflowed.

Tails and fillets of dense flaky white fish provide equally tempting options to shellfish. I’ve tested my own culinary abilities on the occasional salmon fillet and seized the opportunity to purchase a monkfish tail when ordering my groceries one week. The tail arrived at my flat bagged and wrapped in layers of cellophane. When I picked it up, I nearly dropped it: I wasn’t expecting it to weigh as much as Paris Hilton’s dog. The next evening I tentatively pulled back the cellophane, picked up the thickly coalesced muscle of raw fish, and plopped it on an olive-oil doused pan. I drizzled more olive oil, squeezed half a lime, and cracked salt and pepper over the massive tail and popped it in the oven. While it cooked, I made a lime herb butter and halved some cherry tomatoes; these components met the fish during its last ten minutes in the oven. By some miracle, I hadn’t undercooked the slab or burnt it to an inedible crisp. Snow-white pieces of flesh pulled away from the tailbone as thick as a man’s thumb with the help of only a fork. I’m no Nigella Lawson and this fish wasn’t a tenderloin, but I managed to produce a substitute for both.

I’ve tested my own culinary abilities on the occasional salmon fillet and seized the opportunity to purchase a monkfish tail when ordering my groceries one week.

If roasted monkfish tail parallels a roasted tenderloin, then seared stone bass matches a seared strip steak. The pan browns the never-fishy skin to create a pleasant crust over succulent white fillet. The Adamson, a spot where locals enjoy locally-sourced food, served the bass over a bed of orzo, chestnuts, oyster mushrooms, kale, and lemongrass. A rich but brothy brown sauce coated the bottom of the plate. The texture of the delicate but hearty sauce married the lighter flavors of the fish and lemongrass to those of the heavier kale, mushrooms, and chestnuts. I picked a Grenache blanc — a white that can stand up to heavier flavors — from the Côtes de Roussillon. Maybe my before-dinner glass of scotch had sedated my palate, but the whole ensemble tasted divine, especially the mingling of textures — the crispy skin, al dente chestnuts, smooth orzo, and creamy bass. Given the opportunity, I’d easily repeat the evening. Although I watched and inhaled deeply as wait staff carried plates of rump, ribeye, and sirloin out of the kitchen, I barely missed the mouthfeel of beef, slicing into a perfectly-cooked steak that cuts like butter, with the smoked iron taste of red meat…

I barely missed beef until I thought about it.

Allow me to amend my previous statement: I barely missed beef until I thought about it. Even as I consume all the wonderful edibles of St Andrews, my mind wanders back to the pastures of my childhood home where bovines grazed somberly in the thick grass. Although I’ve overcome my beef withdrawal symptoms that plagued me during my first couple weeks in Scotland, I imagine filet mignons with a smear of herb butter slowly melting into the center more often each day. Fish may fulfill dietary protein needs — and even taste divine — but it can never fill that place in my epicurean heart that I reserve for American beef. Who am I kidding… I’m reneging on my previous claim: The sea hasn’t been able to satiate my protein cravings, and I’m going to sear a ribeye in my great-grandmother’s cast iron skillet as soon as I step back onto American soil. Maybe I’ll pair it with a Barboursville Octagon.