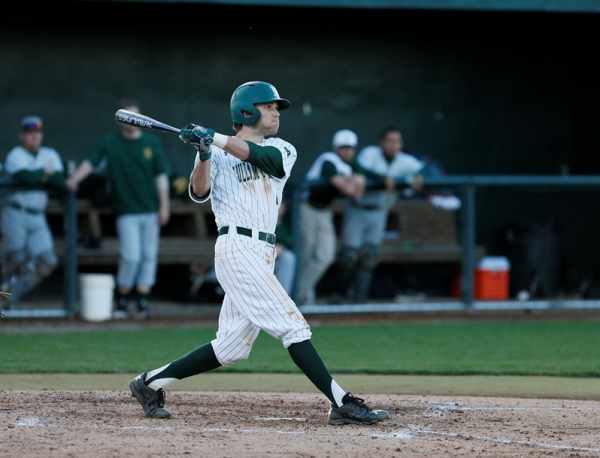 William and Mary returned to the friendly confines of Plumeri Park last Tuesday, coming off a disappointing trip to the West Coast which dipped its record from 5-3 to 6-10. Losers of five straight, the Tribe (7-10) rediscovered its winning ways against visiting Norfolk State, taking down the Spartans 10-6.

“I thought we played pretty good,” head coach Brian Murphy said to Tribe Athletics. “I think the big story of the game was whenever they scored, we were able to find an answer right away … we were able to maintain control of the game and continue to play from out front.”

I thought we played pretty good,” head coach Brian Murphy said to Tribe Athletics. “I think the big story of the game was whenever they scored, we were able to find an answer right away … we were able to maintain control of the game and continue to play from out front.”

Despite the early deficit the College swiftly responded, the middle of the batting order initiating most of the big plays. Senior first baseman Charley Gould and sophomore second baseman Cullen Large put runners on the corners with no outs in the bottom of the second, Gould leading off with a double and Large advancing him to third on a single. After freshman catcher Hunter Smith’s walk loaded the bases with two outs, freshman shortstop Kyle Wrighte brought Gould and Large home with a clutch single, cutting the Spartan advantage to one.

Large put William and Mary ahead an inning later, clubbing a two-run home run off Norfolk State starter Chase Anderson, bringing home Gould who had reached on a fielder’s choice. After the game Murphy praised his second baseman, who finished a perfect 3 for 3 at the plate with four runs batted in.

“I thought Cullen’s home run was just a tremendous at-bat,” Murphy said to Tribe Athletics. “He fell down early, guy was feeding him a bunch of breaking balls, and he was able to stay in the at-bat and finish with a home run. He was great all night.”

Working with a 4-3 lead, the College defense committed two errors in the top of the fifth, resulting in three unearned Spartan runs. After Sheehan committed the cardinal sin of walking the leadoff man, a Gould fielding error on a sacrifice bunt put runners on first and second. A fly out then a walk loaded the bases, and Sheehan was relieved by sophomore right-hander Charlie Fletcher. The next batter sent a ground ball down the third base line, which freshman third baseman Jason Waldman fielded and promptly threw wildly, resulting in three Norfolk State runs. Unearned runs have plagued the Tribe all season; there have been 40 so far, a consequence of the College’s 35 errors.

We still like our bullpen very much,” he said to Tribe Athletics. “When we can set them up in good spots, they’ve done a good job for us.”

Nevertheless William and Mary answered back with its biggest offensive output of the game, plating four runs in the home half of the fifth inning. The top of the lineup set the table with back to back walks to start the inning, and sophomore left fielder Ryan Hall, Gould and Large each smacked a base hit to drive in one run apiece. Smith’s bases-loaded walk later in the inning put the Tribe ahead 8-6, a lead it would not relinquish.

The College’s bullpen put the game away, not allowing a runner past second over the final four innings. Fletcher earned the win for the Tribe, his first of the season, going an inning and a third while giving up only one hit and hitting one batter. Afterwards Murphy lauded the work of his relievers.

“We still like our bullpen very much,” he said to Tribe Athletics. “When we can set them up in good spots, they’ve done a good job for us.”

The College added a run in the sixth and eighth innings to push its lead to 10-6, Hall and Large picking up the RBIs. Senior right-hander Joseph Gaouette tossed a perfect ninth to close out a much-needed win. Norfolk State reliever Michael Parmentier took the loss, allowing all four of the Tribe’s runs in that momentum-changing bottom of the fifth.

William and Mary faces its first Colonial Athletic Association opponent of the season this weekend, traveling south to take on Elon. The first game of the three game series is Friday, with first pitch scheduled for 4 p.m.