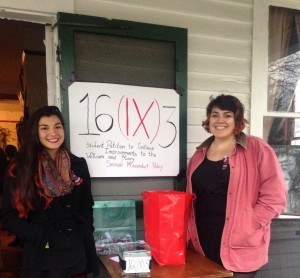 Last spring, the College of William and Mary was the subject of a Title IX investigation, under suspicion of not following Title IX code when it came to handling sexual assault. In the months following, students founded 16(IX)3, a student project that aims to foster conversations between students and administration on sexual assault.

Starting in January, the group’s co-founders Abbey Childs ’17 and Francesca Maestas ’17 began drafting a proposal to administration, asking them to modify certain elements of campus policy regarding sexual assault. The group launched a petition March 19 at the Meridian Coffeehouse, looking for signatures from people in the community who supported their proposal.

Their proposal has eight main parts, which include a request for the College to improve sexual violence education during orientation, to endorse and use the Callisto reporting tool, and to implement a mandatory expulsion policy for repeat violators of the sexual misconduct policy.

According to Childs, while the College has made several improvements to their policy over the last few months, there is still potentially harmful ambiguity in the language of the policies.

“In terms of education and prevention, [administrators] are very receptive to change, now we are trying to address ambiguity,” Childs said. “Things like ‘what constitutes a serial perpetrator’ are [currently] decided on a case by case basis, making the implementation of something like mandatory expulsion for repeat offenders difficult.”

While the College was going through the investigation and making the first round of changes to the policy, they moved away from the traditional hearing system, which can often be intimidating to sexual assault survivors. Instead, they have implemented a system that allows students to report assaults to the Dean of Students, where their final report is made. Then, an administrator in the Dean of Students office decides what the outcome will be for the person reported.

16(IX)3’s proposal also includes a request to the College to make case determinations by a highly trained panel consisting of one faculty member, one counselor and one administrator. The group hopes that this will be less intimidating to students reporting assaults, while also ensuring one person in administration is not solely responsible for making important decisions.

The problem is that [sexual assault] is not an issue directed at a single subset of the population. However, the decision-making process does reflect a certain subset, which is a critical lack of due process. We have seen that now, if other people see what’s happening and don’t say anything, things don’t happen,” 16(IX)3 member Dave Ernyey ’17 said.

Other elements of the group’s proposal include the recommendation that permanent dismissals should extend beyond graduation to limit the return to campus of alumni found responsible for sexual assault, the reinstatement of a Peer Advisor program to help students going through the reporting process, and extending the use of the Clery Act email notification system to include off-campus assaults involving a student.

The group’s event at the Meridian Coffeehouse came as part of their 60-day challenge. This challenge pays tribute to the 60 days that a sexual assault investigation is supposed to take. Each day they are posting online to spread awareness, and about once a week they are trying to host a public awareness event. At the end of the event at the Meridian, they had received approximately 75 signatures on the petition from members of the community.

They will continue to add signatures to their petition in the next few weeks and plan to present their proposal with its signatures at the Board of Visitors meeting in April. Following talks with administration during the earlier part of the semester, they have learned that implementing changes in prevention and education are easier to do, but implementing policy changes.

According to Maestras, she personally intends to further include the student body in their campaign, which she hopes will benefit the rest of the group.

I’m trying to focus on getting students more involved. We have members that come to each meeting, and we have lots of support, but we want to see more action. This affects everyone: it affects students and parents and community members. That’s often the damage that people don’t see, and this damage is a long-lasting one. It’s an issue that William and Mary students should keep in mind,” Maestas said.