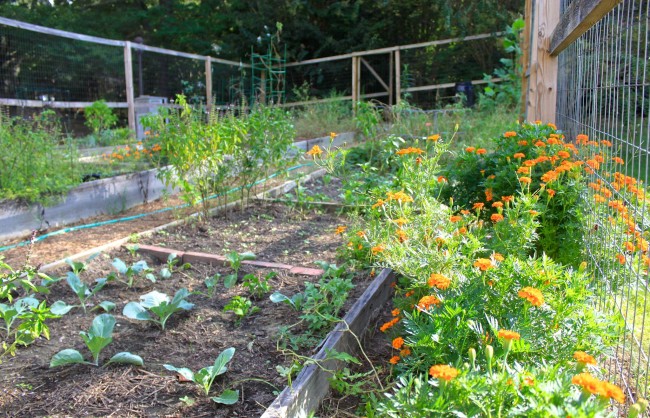 By the end of the semester, the students at Queens Lake Middle School will be able to walk outside their classrooms and harvest plants they have grown themselves.

The Food Desert Project Initiative, led by four Sharpe Community Scholars, plans to build a community garden on the grounds of the nearby Queens Lake Middle School. Although the Sharpe Scholars’ goal is to install the garden by the end of the semester, they have been planning the project since last semester.

Thomeka Watkins ’19, Joshua Sacks ’19, Arianna McFarlane ’19 and Jacqueline Chan ’19 make up the Food Desert Project team. The four of them met in a class called “Living with the Environment,” which they took last semester as a requirement for their Sharpe Community Scholars program. In the past, other groups of Sharpe Scholars have taken on projects that involve raising awareness about issues such as the environment’s connection to stress, feral cats and Williamsburg.

“Sharpe has always prided itself on meeting students where they are and encouraging them to develop community-based research skills that will carry them through to the possibility of senior level research project,” Director of the Sharpe Community Scholars Program Monica Griffin said in an email. “But we start where we are, with what we know.”

In addition to starting a garden for students to cultivate their own vegetables, the project aims to raise awareness about food deserts. Watkins defined food deserts as areas where affordable and nutritious food is hard to obtain, particularly for individuals without a car. She said many Williamsburg residents live in food deserts; she also said the Food Lion on Richmond Road was, for many people, the only source of fresh produce.

Raising awareness about food deserts is only one purpose of the community garden. According to Watkins, the outdoor space will also teach students to grow their own vegetables and will offer a constructive outlet for students who may be depressed. Additionally, she said that the garden can help students develop healthy eating habits, citing childhood obesity as a major issue.

“Everyone says ‘Eat your vegetables,’” Watkins said. “When you can pick tomatoes off a plant, it’s much more interactive.”

Everyone says ‘Eat your vegetables. When you can pick tomatoes off a plant, it’s much more interactive,” Watkins said.

The group started outlining plans for the community garden last semester and has been working throughout this semester to bring those plans to fruition. They meet at least once a month to give each other updates, in addition to communicating over email. Since early February, they have been corresponding with Queens Lake Middle School Principal Scott Meadows.

Meadows and several middle school teachers welcomed the idea of a garden when the Sharpe Scholars presented their plan. One of the teachers offered to donate some of her seeds to the garden’s stock.

“[The teachers] were very enthusiastic about the project,” Chan said. “[Meadows] has been more than helpful.”

The group is still in the process of installing the garden. They are corresponding with teachers, who are deliberating between two places on the middle school’s campus to create the garden. The scholars are also deciding which vegetables to grow and are also looking into purchasing supplies, such as seeds and gardening tools.

“We’re staring off small and seeing if we can create longevity,” Watkins said.

We’re staring off small and seeing if we can create longevity,” Watkins said.