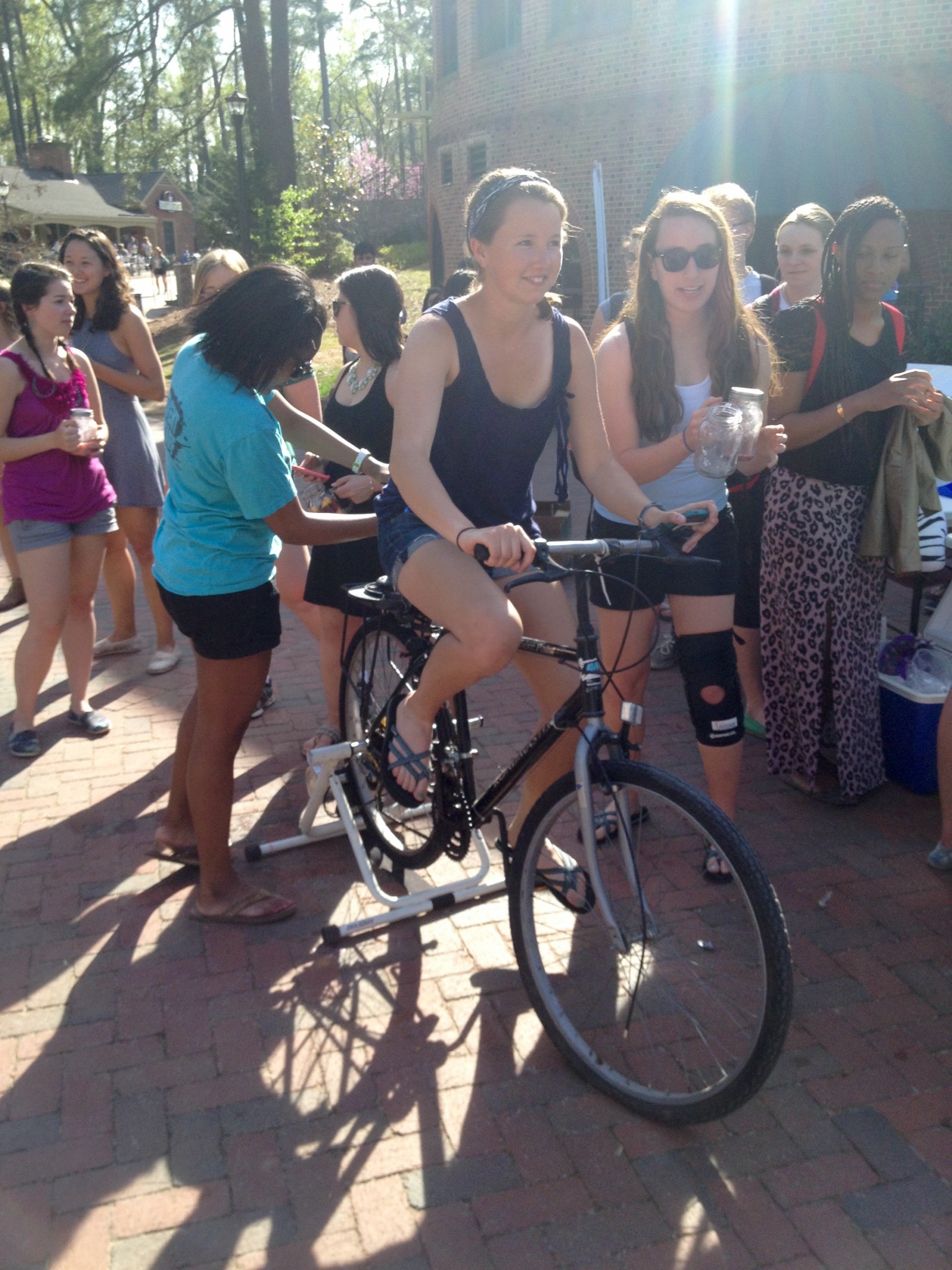 The College of William and Mary’s Committee on Sustainability is presenting a series of Earth Week events discussing the past and present of sustainability April 11–18.

“The point of Earth Week is really to reaffirm the College’s commitment to sustainability instead of making it something lofty that can’t really be accomplished in daily life,” Eco Ambassador and event organizer Liz Jacob ’17 said.

One of the many events held during the week was Monday’s AMP Smoothie Bike. Participants poured a mixture of fruit, ice and juice into a blender hooked up to a bike, then pedaled for several minutes to blend their smoothies.

Jesse Smyth ’18, a member of the Student Environmental Action Coalition, participated in Smoothie Bike, as well as several other Earth Week activities like a nature walk and invasive species restoration at the Crim Dell.

“I hope that [Earth Week will] increase people’s awareness of sustainability because it’s such a big event,” Smyth said. “We do little things throughout the year as well, but it’s a big enough event that it could hopefully attract the larger community as well.”

Jamie Brunkow, a Lower James River Riverkeeper from the James River Association, continued Monday’s discussion of preservation and recreation with an evening presentation.

The JRA serves as “guardian” of the James River, Virginia’s largest river. The group works to educate individuals on the importance of the river, as well as restore its watershed and lobby the Virginia General Assembly on its behalf.

Brunkow spoke about the importance of making Earth Day resolutions and following through with them.

“Make an Earth Day resolution not to just do trash cleaning or something around Earth Day,” he said. “Choose something you’re really passionate about and commit.”

Allison McCluskey ’16, a geology and environmental science major, attended Brunkow’s talk and planned to participate in as many Earth Week events as possible.

“[Before,] I didn’t know that much about the James River in particular,” she said. “[I learned] all of the ways people can interact with the James, because we’re in such a unique little peninsula and people don’t engage very much with these rivers, but they’re really relevant and important.”

Jacob said she saw the information regarding student volunteer opportunities as a key highlight of Earth Week.

“It was really cool to see the functionality that students can have,” she said. “Even though we don’t have degrees in biology and geology, we can have an impact on our local watershed.”

“[Voices] makes environmentalism more tangible for people because they can connect [it] with issues they already know about like poverty and home security,” Jacob said. “You start to see how these issues go beyond more than one sphere and how solutions have to be more holistic than just looking at them as environmental issues or people issues when really they’re just society issues.”

Jacob said she saw this year’s Earth Week as an event focused on building education and capacity, whereas in past years it has consisted of more promotional, awareness-garnering events.

“[Earth Week] gives people the options … to think a little more critically about the environment and how they interact with it,” she said. “It’s not about changing everyone’s lifestyles and forcing everyone to care about these issues because I don’t think you could ever do that, but making it more about giving people the opportunity to learn if they want and making it fun and engaging.”