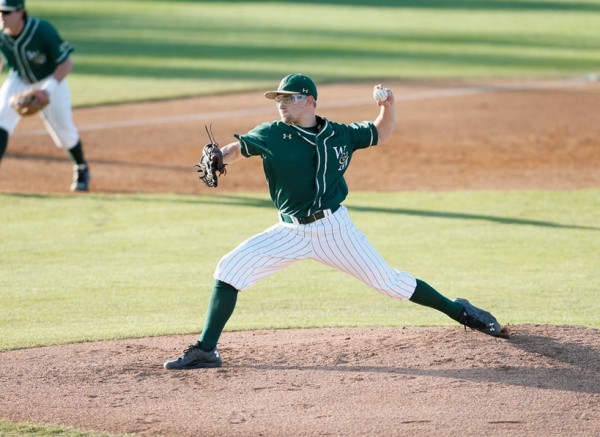 After Tuesday’s matchup with Old Dominion was canceled due to rain, William and Mary hosted Virginia Commonwealth Wednesday evening at Plumeri Park, falling to its former Colonial Athletic Association rival in a 12-5 blowout.

The Tribe (15-17, 3-4 CAA) struggled to find rhythm at the mound, using six calls to the bullpen in the almost three-and-a-half hour game, and freshman left-handed pitcher Kinston Carson was pulled out after just two innings in which he allowed three earned runs on seven hits. Additionally, five errors on the College’s fielding doomed any chance of a late rally by allowing VCU (25-12, 9-3 Atlantic 10) several runs.

The game’s action was spread throughout the night; most of the College’s runs came in during the first third of the game. The Rams took an early 1-0 lead off an RBI single in the top of the first and held their lead through the bottom half of the frame. The Tribe seized the momentum in the bottom of the second after a big double play stopped a runner from crossing the plate in the bottom of the first. The Tribe then scored three runs in the following half-inning, junior third baseman Tim Hoehn getting the tying RBI before freshman shortstop Kyle Wrighte and catcher Hunter Smith hit sacrifice flies to bring in a pair of runs to establish a 3-1 lead.

VCU refused to back down, scoring a run early in the top of the third off a line drive past Carson. Carson was pulled in exchange for junior right-hander Jon Yoest, who gave up a pair of runs and the lead on a ball that made it just out of the infield for a single. The Tribe’s response was less intense than it was in the second inning, which added just one run in the bottom of the third after senior first baseman Charley Gould hit an RBI double to tie the game at four apiece.

After an unproductive fourth inning that featured a Rams pitching change, VCU scored a pair of runs in the fifth and five in the sixth. The Tribe brought out sophomore right-handed reliever Charlie Fletcher for the fifth, who gave up three hits and two runs in his one-inning appearance. Fletcher would eventually be saddled with the loss after giving up the deciding sixth run, dropping to 2-2 on the year.

Junior right-hander Chase Bailey replaced Fletcher in the sixth inning. Unfortunately for Bailey, the Rams’ offense got hot, batting through the order in the top of the sixth. Giving up two runs before making an out, the Tribe called the bullpen again, this time bringing out sophomore right-hander Robert White with the score at 8-4.

Errors plagued the College in the sixth, accounting for two of the five runs. After the College finally escaped the inning with a strikeout at the top of the order, VCU was up 11-4. The Rams plated their final run in the seventh off freshman right-hander Jason Waldman. The Tribe’s hopes of a late rally faded as it scored just one run in the bottom of the eighth, courtesy of a VCU error. Senior right-handed closer Joseph Gauoette was the last pitching change for the College.

Overall, the College allowed 12 runs on 19 hits while committing five errors. Rams reliever Luke Crabb picked up the win, improving his record to 1-0. Gould led the Tribe with a pair of hits in three at-bats. The College had eight hits and five runs, falling further into a losing record and now two games below .500.

The College’s next eight games are on the road, beginning with a trip to CAA opponent James Madison Friday through Sunday.