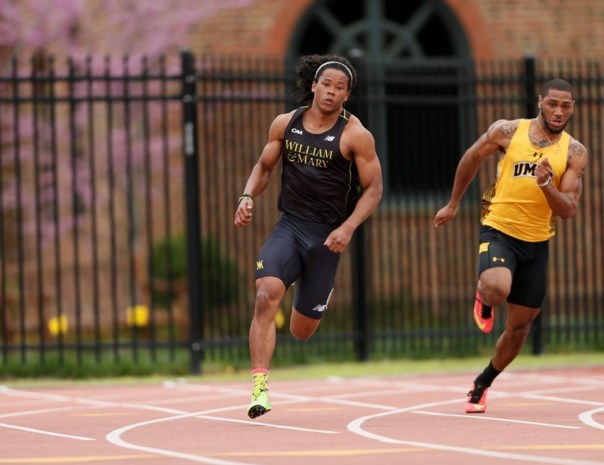 William and Mary, a school rooted in longevity and tradition, has tried to modernize itself and keep up with the changing times. Sophomore Davion Hutt blew right through the times, breaking the longest-standing track and field record in school history Friday at the Duke Invitational.

Hutt shattered the elusive school record in the 100-meter run, becoming only the 16th name to be attached to the record. The sophomore began by notching a 10.71 in the preliminary run, his best ever time to that point. In the second run, Hutt staked his claim in the record books, finishing the race in 10.58 seconds, beating the prior mark by .06 seconds. Mike Fratkin ’71, Doug Griffith ’69, Bob Keroack ’79 and Jay Cunningham ’93 all held the previous best time of 10.4 seconds hard time — translating to 10.64 seconds — set in 1968.

Saturday brought eight more IC4A qualifiers, all coming at Virginia. Sophomore Dawson Connell posted a lifetime-best in the 1,500-meter run to re-qualify for the IC4As, finishing in 3:46.40. Freshman Ryan McGorty also qualified in the event, while junior Faris Sakallah earned an IC4A bid in the 10,000-meter run with his first sub-30 minute run in the event. Freshman Riley Covert qualified in the 5,000-meter run, and senior All-American Bob Smutsky and sophomore Derek Trott performed strongly in javelin to claim IC4A bids.

Fellow sophomore Molly Applegate also qualified for the ECACs with a lifetime-best 10:37.82 time in the 3,000-meter steeplechase.

Saturday at Virginia, senior Megan McGovern earned ECAC qualification in the 5,000-meter run, running a time 1.1 seconds better than her previous best. Sophomore Molly Breidenbaugh also performed well in the event, running a 16:38 and shattering her previous best by 11.5 seconds. Senior Breanna Burkalo re-qualified for the ECACs in the 400-meter hurdles at 1:01.58. Redshirt-junior Rochelle Evans and junior Rachel Rabbitt both earned ECAC bids as well, each setting lifetime-bests in the shot put and 3,000-meter steeplechase, respectively.

The College will now prepare for the Penn Relays this upcoming weekend, one of the more iconic events on the slate for 2016.