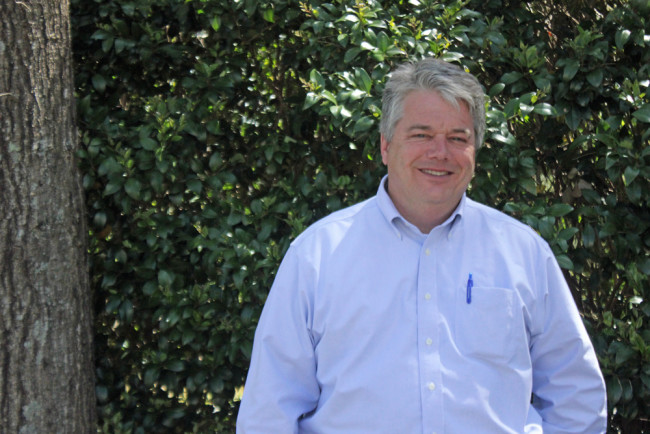 Looking back on his childhood, Greg Granger remembers the first time he crossed Richmond Road without supervision. Years later, running for City Council, Granger is still trying to open up new domains in Williamsburg.

Granger’s name will be one of five on the ballot Tuesday May 3. With both Mayor Clyde Haulman and Council Member Judy Knudson stepping down at the end of the term and Vice Mayor Paul Freiling up for reelection, voters will have the opportunity to choose three candidates on Election Day.

“I am always happy to talk about my experience growing up in Williamsburg. It was the best. I couldn’t ask for a better childhood, I just couldn’t have,” Granger said. “The campus and Colonial Williamsburg — that was my playground. I was all over it all of the time.”

I am always happy to talk about my experience growing up in Williamsburg. It was the best. I couldn’t ask for a better childhood, I just couldn’t have,” Granger said.

As a life-long resident, Granger has seen a lot of change in the business realm of Williamsburg. Granger recalled his excitement at seeing the McDonalds on Richmond Road and Busch Gardens move in.

After attending college in North Carolina and working as a paralegal in Norfolk, Granger returned to Williamsburg to found his own paralegal company in 1996. Granger has also founded and served as the president of Replay Sports, a consignment sporting goods store, and now serves as the President of the WMBG radio station.

The Granger family made a big name in Williamsburg: Granger and his father Gil Granger, who was mayor of Williamsburg from 1996 to 1998, own about 30 properties in the city, according to Granger.

Despite his father’s position in the community, Granger has never held public office.

“I’ve been asked to run for several cycles now, and I’ve chosen not to because of my kids and because of my family and also because there were other people who were doing a pretty good job,” Granger said. “There are two open seats right now, I don’t want to run against anybody, and people will ask me now — so, who’s your opposition — and well hopefully, nobody’s opposed to me, hopefully because we all get three votes, everybody loves me, that would be great.”

For government professor Sophia Hart, a friend of Granger’s for almost 15 years, Granger’s lack of experience in public office is not a major concern. To her, Granger’s engagement with the community throughout his life testifies to his ability to serve.

“What he lacks in public service he more than makes up for with his extensive and innovative entrepreneurial experience and his long-standing personal commitment to the health and welfare of our local economy,” Hart said in an email.

What he lacks in public service he more than makes up for with his extensive and innovative entrepreneurial experience and his long-standing personal commitment to the health and welfare of our local economy,” Hart said in an email.

“My husband and I watched [Griffin Arms] as it developed over more than a year and the final product was a testament to Greg’s unwavering pursuit of quality and convenience for local residents, students and visitors alike,” Hart said.

In recent debates, Granger has appealed to his independence from the two biggest entities in WIlliamsburg, the College and Colonial Williamsburg. Out of the five people running for City Council, Granger is the only candidate who has never been affiliated with either organization.

Granger said this would allow him to take a more objective approach in issues relating to Colonial Williamsburg and the College and not have to worry about potential conflicts of interest.

The issue surfaced a town hall hosted by The Flat Hat and StudentCaucus a friend of Granger’s, Billy Scruggs, asked the candidates how they would manage the city’s relationship with the College, Colonial Williamsburg and Busch Gardens.

“I think we are all pretty much going to agree on this, that our allegiances lie with the city,” economics professor and City Council candidate Elaine McBeth said.

Freiling noted that the City Council lacked oversight capacity over the College because it is a state institution, and that Busch Gardens is located in James City County.

Don Pratt, owner of local restaurants The Hound’s Tale and Aromas, said Granger’s independence from the College and Colonial Williamsburg would reinforce Granger’s objectivity in his decision-making.

“I think Greg considers all of the factors involved, and I think he would consider the impact of the decisions on the College and on Colonial Williamsburg, on the citizens of Williamsburg and the businesses of Williamsburg,” Pratt said. “So I think having an independent perspective probably is a very beneficial thing to him and to have on City Council.”

Although Pratt, a renter of Granger’s, is a James City County resident, rendering him unable to vote in the city council elections, he said he supports Granger’s campaign.

Pratt said Granger’s business experience and connections within the business community would allow him to work toward economic development and growth in Williamsburg.

“Oh he would do a wonderful job, an excellent job [in City Council],” Burgdors said. “He’s a very good business man, he knows how to deal with things, he really knows how to interact with his customers, how to get stuff done.”