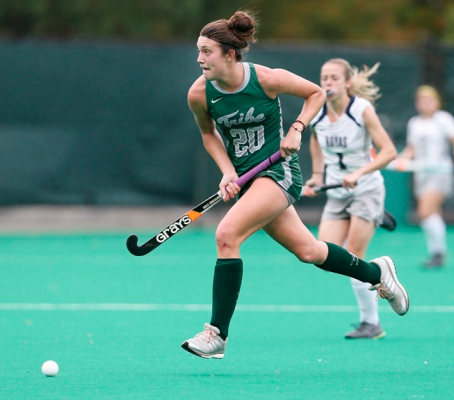 William and Mary failed to get its 2016 season started with an upset win Friday, dropping the opening contest 8-4 to No. 4 Duke in Durham, N.C.

The Blue Devils (1-0) asserted their superiority early and often, jumping out to a 6-1 lead by the end of the first half. The Tribe (0-1) faced constant pressure through the opening 35 minutes, unable to create chances as Duke pinned the College back in its own half. At halftime, the Blue Devils owned a 16-5 advantage on the shot chart.

Freshman goalkeeper Morgan Connor turned in a valiant performance in her collegiate debut, making 11 saves as she played the entire match. She was called into action almost immediately, saving a Duke shot from a penalty corner just over one minute into the game. 65 seconds later, Connor was picking the ball out of the back of her net as she was beaten by a deflection off another penalty corner.

Freshman goalkeeper Morgan Connor turned in a valiant performance in her collegiate debut, making 11 saves as she played the entire match.

The College scored its first goal of the season when the game was still in reach. Down 2-0, junior forward Cammie Lloyd fired a shot, which was saved by Blue Devil goalkeeper Sammi Steele. Junior midfielder Booter Ellis, a preseason All-Colonial Athletic Association selection, was on the scene, tapping home the rebound at the 11:26 mark. The Tribe failed to equalize, however, and Duke rattled off a 4-0 run to finish the half and effectively put the game out of reach.

The Tribe grew into the game in the second half, outscoring the Blue Devils 3-2 over the final 35 minutes. The Tribe scored twice in quick succession to open the period, freshman forward Cata Days and senior forward Maria Jose Pastor providing the finishing touches. Lloyd also found the back of the net, but Duke’s two insurance goals sealed the College’s fate, the Blue Devils ultimately triumphing 8-4.

The Tribe finishes its two-game road trip next Friday when it visits American at 4 p.m. in Washington, D.C., before the home opener at Busch Field against Rutgers on Sunday at 1 p.m.