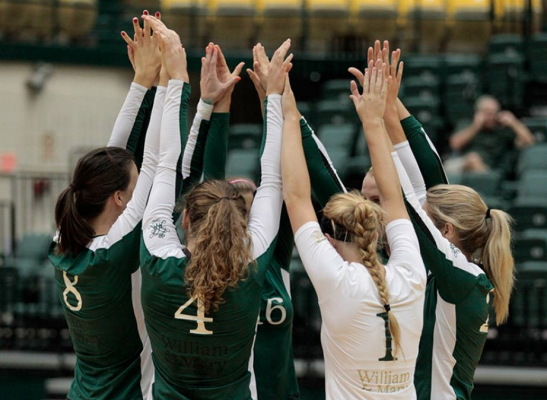 Coming back from a long offseason, William and Mary’s volleyball program looks to start a new era this fall. A new coaching staff and new team members bring new hope with them to the squad, which finished sixth in the Colonial Athletic Association in 2015.

Last year’s 10-20 overall record and 4-12 conference record leaves plenty of room for improvement. That improvement began in late spring with the addition of head coach Melissa Ferris. Ferris’ resume includes 19 years of assistant coaching split between Rice, Wyoming and Texas State. Of those 19 seasons, 13 ended with winning records and nine ended with 20 or more wins. For perspective, the Tribe has not had a winning season since 2009 (18-11) and has not had a 20-or-more-win season since 2005 (22-9).

On the court, fans of the team will recognize 11 veteran players. Headlining the returners are three seniors: defender Gabrielle Pe, setter Stephanie Paul and middle blocker Kristen Larrick. Pe is the most experienced of the trio and certain to be a starter, though Paul and Larrick will likely see lots of time in the starting rotation.

The team’s junior class is a solid mix of experience at several positions. Defender Sara Zumbach returns at the libero position with Pe, while middle blocker Paige Humphrey, a starter in her first two seasons, joins Larrick. Setter Austyn Ames and outside hitter Maddie Sanford aim to develop their roles and vie for regular starting positions. Likely starter and outside hitter Sydney Biniak returns as a leader among the outside hitters, as the departure of Dessi Koleva ’16 and Mallory Brickerd ’16 leaves Biniak as the most experienced at her position.

The College has three returning sophomores, middle blocker Katie Primatic, outside hitter Heather Pippus and setter Katie Kemp. Primatic will be working hard to earn playing time with Humphrey and Larrick, while Pippus and Kemp look to keep and improve their starting spots after breakout rookie seasons.

The season began this weekend with a tournament at Clemson, where the Tribe went 1-2. Between now and Sept. 21, the College plays in three more tournaments before beginning a new run at the CAA title. Next weekend the team heads to the Belmont Invitational in Nashville before heading home Sept. 9-13 for the Colonial Classic at Kaplan Arena. The final tournament before conference play will be the Gamecock Invitational hosted by South Carolina in Columbia, S.C.

With the mix of solid experience and a fresh staff, the Tribe could be a surprise contender as the season progresses.

The Tribe’s home stands are split a bit more than in the past. The first time to see the Tribe at home after the Colonial Classic will be Oct. 7 against Charleston and Oct. 9 against defending conference champion North Carolina-Wilmington. After fall break and a road trip, the College returns to Kaplan with matchups on Oct. 21 vs. Hofstra, Oct. 22 vs. Northeastern, Oct. 24 vs. Elon and Oct. 28 vs. James Madison. When basketball season begins in November, the Tribe will be wrapping up the regular season with a pair of home matches, one vs. Towson on Nov. 11 and the regular season finale Nov. 12 vs. Delaware.

With the mix of solid experience and a fresh staff, the Tribe could be a surprise contender as the season progresses. The CAA preseason poll placed the squad at No. 7 and did not name any Tribe players to the All-CAA preseason team, giving the College motivation to prove to critics that 2016 is more than a rebuilding year and instead the start of a lasting upswing for the program.