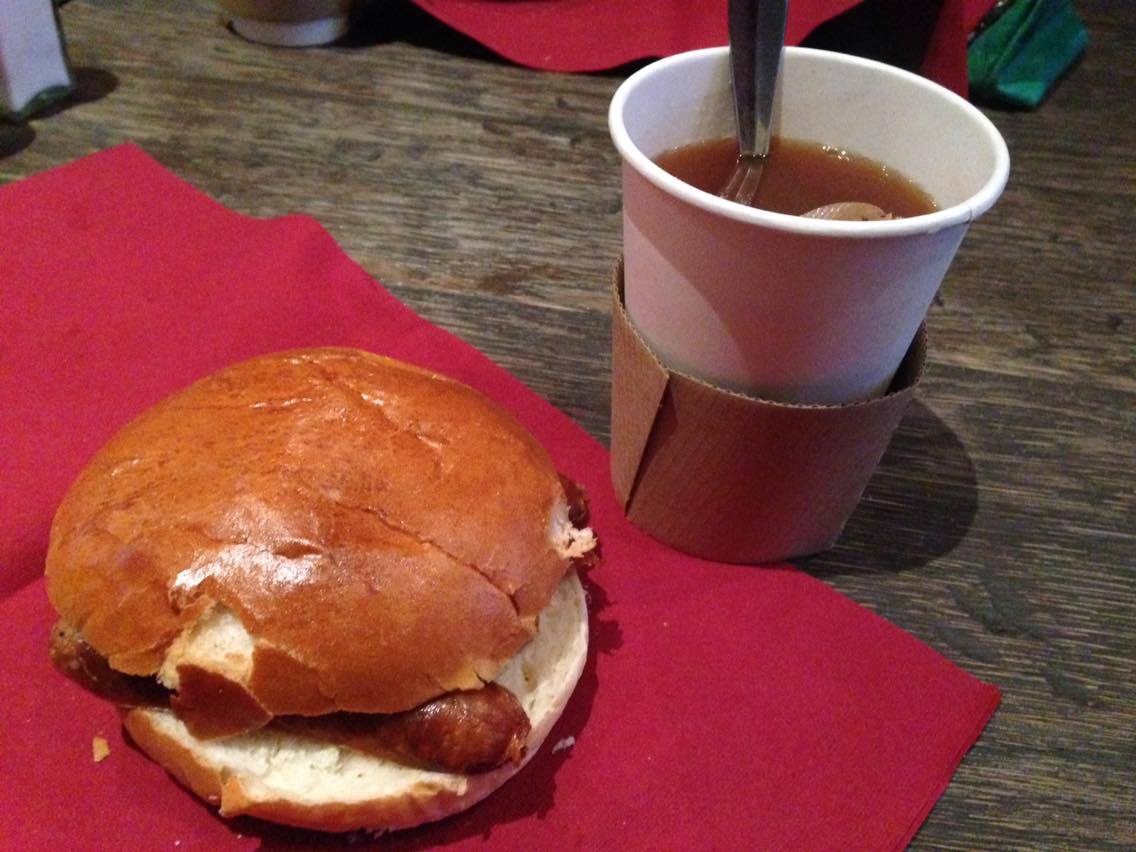 A brilliant cotton-candy colored streak burned through the clouds in the first wee hours of May. The sky spit streaks of soft drizzle on the faces of four girls whose faces had just departed from their pillows. Besides the brash blaze of fuchsia, only a palpable greyness hung in the air. The greyness of the morning would have daunted the girls as they made their way to St Andrews’ East Sands—the stretch of beach adjacent to the age-old pier and skirting the ruins of Scotland’s once-grandest cathedral—but the energy of hundreds of other young people making the same trek defied the dull and oppressive atmosphere, much like the beckoning color of that single piece of sky.

All coursing the street a little before 5:00 AM were making their way to East Sands to complete the ritual of May Dip, a scholarly baptism and, at the University of St Andrews, the only way to ensure successfully completing a degree. That’s how the legend goes, at any rate, and why test a centuries-old legend? One of the four girls had committed an academic sin: She had unwittingly stepped on the “PH,” the initials of Patrick Hamilton— one of Scotland’s first Presbyterian martyrs— laid in

stone on the spot where he was burned for heresy. A quick submersion in the North Sea before dawn had broken in full on the first day of May would absolve her of her trespasses.

This girl, however, whether to keep her mind off the impending chill of the icy Scottish ocean or to preserve some sense of wakefulness, could think of nothing but her stomach. Her mind wandered far astray from reflection on her academic sins and their imminent purge.

Aside from the smashed bottles, the sacrificed lambs from the night before, lining the procession like runway lights at an airport, the walk to the sea reminded the outwardly-penitent but inwardly-lackadaisical lady of church services she sat through as a child. The reality of scratchy red upholstery on wooden pews had greeted the childhood version of herself at 11:00 on Sunday mornings. After the initial introductory story or joke, she would stop paying attention to the sermon. Fidgeting increased as her stomach told her that the hands on the clock had almost reached noon, and then she would begin to pray—in earnest this time—that her parents would not run into anyone to whom they wished to speak because she didn’t think she could stand the persistent monster of hunger poking at her ribs any longer.

Between arrival at the beach, running headlong and screaming into the water, and standing on the sand like a wet rat swaddled in an oversized towel, that same after-preachin’ goblin made its home in the lining of an empty stomach. She had done her due diligence: From the recesses of her mind, she recalled a tenent of her Baptist upbringing and could almost hear the minister with a perpetual cowlick telling her before her actual Baptism that if she wasn’t completely submerged on the first attempt, back under the water of the large baptismal pool she’d go—she remembers little besides that rule and a tale about two neighbors, a dog, and a dead rabbit from Sunday morning services. Like a good Baptist, she ran into the water, thought about her commitment to academics, ducked under the chilly, lapping waves for just enough time to douse the top of her head, and ran out of the water a soul saved from failing her degree. Now, after publicly professing loyalty to scholarly pursuits, she could safely turn her attention toward the next meal.

Enticing the rest of the ladies toward Market Street and the promise of breakfast sandwiches and hot drinks at the Vic as quickly as possible, however, proved almost as herculean as a task as coaxing her father away from discussions of church business and towards the Jeep during her early years.

Finally the four had reached the doors of the Vic, the closest establishment to a club that the streets of St Andrews offers. Flinging the doors open reveals a checkerboard floor leading up to a solid staircase. The girls stepped across the checkerboard and followed the black and white wallpaper—a truly odd print resembling a child’s attempt to decorate his room in a papier mâché of his father’s old newspapers—up the stairs to warmth and the promise of food.

After waiting in line, the spiritually satiated but physically famished group stepped up to the bar to order. The Baptist among the group would have liked to pay homage to the Reverend Elijah Craig by drinking some of his chosen tipple over ice with a splash of branch, but alas, as preferable as British liquor laws are to those of their transatlantic neighbor, the Brits will still refuse core-warming bourbon to anyone at 5:45 in the morning—even after May Dip. She settled on a sausage roll and hot tea.

By the time she had dropped two lumps of brown sugar and poured a sufficient amount of milk into a paper to-go cup filled with boiling water and a pouch of black tea leaves, the sausage roll had appeared, wrapped in a red napkin, on her table. She plopped down, so thankful for a savory bit of pork wrapped lovingly in layers of buttery carbohydrates, and pulled the crimson cover off of the bundle.

Nothing but two link sausages split in half and placed on a slightly-better-than-normal sandwich bun greeted her. She had expected to see a beautiful but sturdy pastry with a buttered top; she had expected to pick up the perfectly warm parcel, bite through dense but somehow still flakey layers of pastry into fried sausage with hints of sage and rosemary. She got disappointment instead.

At least the sausage-on-a-slab-of-bread warmed fingers as they conveyed the disenchanting breakfast from table to mouth. A splash of catsup from a 1950s diner-style bottle on a table evoked more of the sausage’s umami notes and returned a bit of dignity to the meal. As the Vic filled, the tea slowly cooled to a pleasant temperature, and the group wandered back down the stairs and out their doors to seek their beds.

The energy of the brisk morning had subsided to a grey drizzle. The vitality of the day had departed when the pink streak of light in the sky had faded into the ordinary. The clock read 6:30 when the girl who had stepped on the “PH” climbed back under her covers as an absolved soul. Despite her venture into the purifying May sea, she still felt unfulfilled: the thought of a good biscuit, the buttermilk biscuits of her Appalachian ancestors, pulled open, steam rising from its rich center, and filled with infallible Jimmy Dean sausage and maybe an onion chutney kept her from sleep. If you’re going to have a spiritual experience, you may as well have it in the American South where a little bit of flour, butter, and pork put together in the right ensemble can make your efforts worthwhile—or at least give you something to look forward to while you’re doing the uncomfortable task of soul-searching.