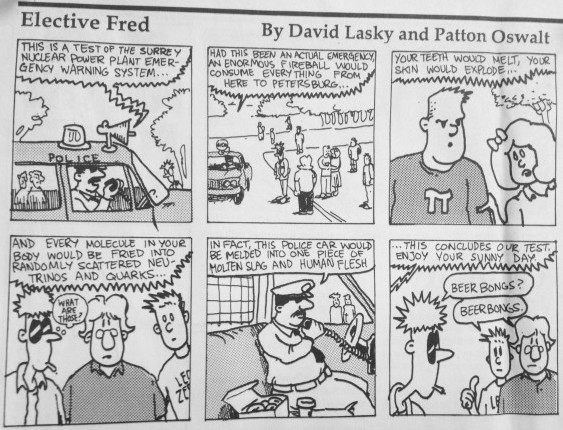 Comic artist David Lasky’s graphics career has taken him from the basement of the Campus Center to the comic shops of Seattle. Breaking into producing published comics as a Flat Hat staff member, Lasky ’90 has gone on to publish his own comic books and a graphic novel.

At the College of William and Mary, Lasky majored in fine arts and minored in English. He said that this combination set him up perfectly to become a graphic novelist because he was able to dive deeply into both artistic techniques and the mechanics of storytelling.

In fact, storytelling is a crucial part of Lasky’s work.

“I still do some painting from time to time, but I’m really more interested in telling stories than in just presenting images,” Lasky said.

This desire to tell stories through his art led him to The Flat Hat, where he became a cartoonist his freshman year. By his sophomore year, Lasky was promoted to graphics editor, a position he held until his senior year.

“I even tried to quit so somebody else could take the job because I felt guilty keeping it for so many years,” Lasky said. “But the editors kind of said, ‘Nope you can’t quit,’ so I just kept the job.”

Since working on The Flat Hat was such a major part of his college experience, Lasky remembers a number of people with whom he worked who have also gone on to be successful in their fields.

Married couple Cece Bell ’92 and Tom Angleberger ’92 met at the College, worked at The Flat Hat and have both made a name for themselves as children’s book authors. Angleberger is best known for the Origami Yoda series and Bell for her 2015 Newbery Honor winning graphic novel El Deafo about what it was like growing up deaf.

Besides working with the couple when he was at The Flat Hat, Lasky also worked with Bell as a colorist on El Deafo.

“I’m really proud to have had some hand in it,” Lasky said. “I’m glad the book is successful, but I’m really pleased that it’s helping people understand what it’s like to have hearing loss.”

The cartoonists working under Lasky had different levels of involvement in the publication process. According to Lasky, Drew Dernavich ’90 was a very talented cartoonist who was almost never seen in The Flat Hat’s office.

“He was a cartoonist who would just turn in his work by sliding it under the door,” Lasky said. “But he did really amazing single panel cartoons and he’s now a New Yorker cartoonist.”

“[Oswalt] was a reporter, but he also did a comic strip,” Lasky said. “Nobody really understood his comic, but it was interesting.”

Lasky said that even though the strip didn’t make much sense, Oswalt’s unique brand of humor shone through. Lasky had always wanted to create a weekly comic strip, but had never found an idea he felt he could flesh out enough to commit to going back to weekly.

I think the most valuable lesson I learned starting out was to just go ahead and do things for yourself. Don’t wait for an editor or person in charge to approve your work, get your work out there. — David Lasky ’90

But, at his editor’s request, he worked with Oswalt on a strip because of his skills as an graphics artist and Oswalt’s skills as a writer.

Lasky said it certainly isn’t an example of his best work, but it was an exciting project to take on.

“When I look back at it, it wasn’t really that great and I don’t really want people to see it now,” Lasky said. “But at the time it was very exciting for me.”

According to Lasky, The Flat Hat gave him more than just friendships and hands-on graphics experience.

It also provided him with an understanding of the basics of journalism that would be instrumental in his later work.

“Because my illustrator’s desk was just a few feet away from the editor-in-chief’s, I would hear whatever debates and discussions were going on and I would really get an education in journalism, just by sitting there one night a week for several hours,” Lasky said.

According to Lasky, creating this graphic novel was the result of a desire he had since getting into comics.

“I had always thought about making a graphic novel, but for a while I didn’t really have a story that I thought was big enough and I was still kind of learning my craft,” Lasky said.

It took a couple of years to find someone willing to publish the book, as Lasky was mainly contacting comic book publishers, but by the late 2000s he found a publisher in Abrams Books.

Lasky said “actual book publishers” were starting to seek out and publish graphic novels at this time.

Prior to the publication of his graphic novel, Lasky created comics in many different forms.

He started out self-publishing “mini-comics” made on a photocopier and was later picked up by a Seattle comic book publisher.

Lasky said that now it is easier than ever to get your work published.

The advice he offered to aspiring comic artists at the College is to get as much experience as possible and to find a way to get their work published.

“I think the most valuable lesson I learned starting out was to just go ahead and do things for yourself,”Lasky said. “Don’t wait for an editor or person in charge to approve your work, get your work out there.”