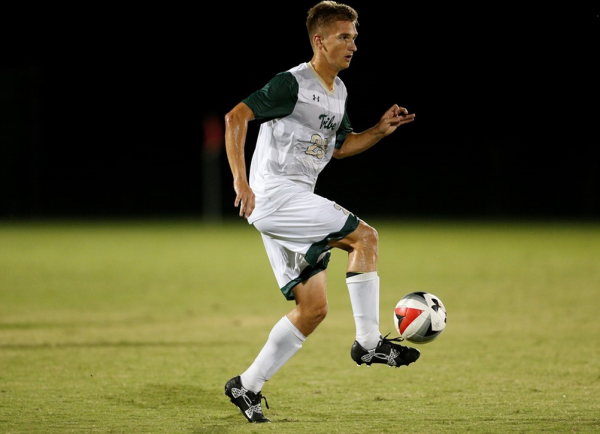 Deadlocked in a scoreless match with Liberty 15 minutes into the second half, William and Mary’s offense asserted itself and poured in two goals in four minutes to break open the game and cement a 2-0 road victory.

The first half was largely a defensive battle, with neither team being overly aggressive on offense and always looking to prevent counterattacks. This half featured only three combined shots, with just one from the Tribe.

Liberty had the first scoring opportunity of the game in the seventh minute, but Flames forward Tresor Mbuyu’s shot sailed just above the goal. At the 13:39 mark, Kevin Mendoza unleashed a shot, but Tribe redshirt junior goalkeeper Phil Breno reacted immediately and came up with a huge save.

The best Tribe chance of the opening half came when freshman forward Reeves Trott found some space and took a shot on net, forcing the Liberty keeper to make the save. However, this was the only shot by the College through the first 45 minutes.

The chance for the College to turn on the attack was presented just over one minute into the second half, as Liberty midfielder Kevin Mendoza accrued his second yellow card of the game, leading to his ejection. With a man advantage, the Tribe attack picked up in tempo and intensity nearly immediately.

After knocking on the door for nearly 10 minutes, the Tribe finally found the back of the net in the 61st minute. Sophomore forward Ryder Bell drove the ball down the right sideline, crossed to a cutting Trott, who headed the ball into the upper right corner to give the College a 1-0 advantage.

After coming out without a lot of energy in the first half, the Tribe pulled together at the half, gained a man advantage, and put away the Flames to the tune of 11 second-half shots, including five on goal.

Trott, Bustamante and Berry led the team with three shots apiece, while Breno finished with his first career shutout for the College.

The Tribe returns home on Tuesday to face Longwood at 7 p.m. at Martin Family Stadium.