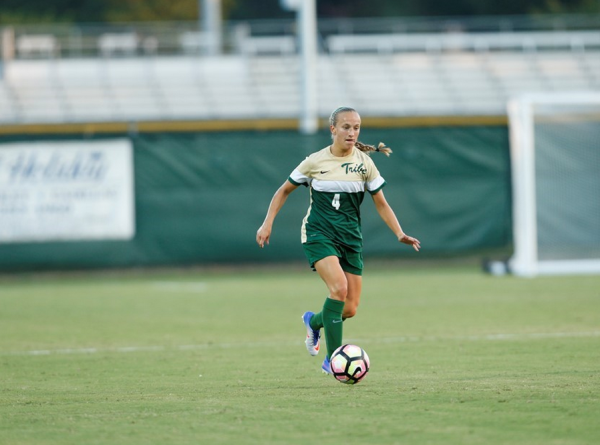 Before William and Mary’s tough weekend matchups, coach John Daly told his players: “Regardless of what happens, keep going, keep fighting.” The team took his words to heart, defeating Old Dominion in overtime on the road. Though the Tribe (3-2) came up short against No. 16 Virginia Tech on Sunday afternoon, it draws confidence from its second-half fightback.

Virginia Tech (4-1) dominated proceedings in the first half Sunday, led by standout Hokie forward Murielle Tiernan. Tiernan tallied two first-half goals, slotting home a cross after 27 minutes and doubling the Hokies’ lead 15 minutes later, blasting the ball inside the right-hand post of redshirt junior goalkeeper Grace Smith. The Tribe had a few chances — senior midfielder Haley Kavanagh hit the post when she seemed sure to score — but only managed three shots. After the game, Daly acknowledged that sometimes one player can turn a game.

“[The Hokies are] a good team, and they have one special player … she was the difference with the two goals,” he said to Tribe Atbletics.

However, Daly was impressed with his team’s second-half performance. After conceding 11 shots in the first half, the Tribe was in need of a second wind. The team exploded in rejuvenated fashion out of halftime, and although the Hokies had their share of chances, the Tribe squandered several golden opportunities. The Tribe failed to get a shot away after seizing on a back pass gone wrong, often looking to lay the ball off when shooting was an easier option.

“In the second half we got a bit more into battling for the ball … and did much better dealing with [Tech goalscorer Tiernan] and with their other threats,” Daly said to Tribe Athletics.

“In the second half we got a bit more into battling for the ball … and did much better dealing with [Tech goalscorer Tiernan] and with their other threats,” Daly said to Tribe Athletics.

The comeback seemed to be on when junior midfielder Rachel Moore stroked home a penalty kick in the 63rd minute, but the Tribe could not find another breakthrough. Soon after, sophomore midfielder Mackenzie Kober hit the crossbar, but the Tribe was pinned back for much of the remaining time.

Not all of the College’s opponents will be so tough, though, and the Tribe created the chances to win the game, which Daly characterized.

“The kind of chances that you just have to take against a good team,” Daly said to Tribe Athletics. “We had chances in the first half, we had easy chances in the second half, and we didn’t take them.”

The Tribe, the Colonial Athletic Association favorite, did take home a win on Thursday, with Kober heading in a golden goal from a free kick by junior back Haley Kent just three minutes into extra time to beat ODU. In a back-and-forth contest, the Tribe was outshot 14-5 by the Monarchs, but Smith made six saves. The game was delayed just after its beginning due to severe weather, and the first half was mild-mannered.

The match kicked into life in the second half; Kent’s shot was scooped off of the line, and all hands were on defense for the College in the final seconds of regulation. The Tribe held its nerve and clinched Daly’s 397th career win.

Daly will search for wins 398 and 399 this week. The Tribe takes a short drive to take on Virginia Commonwealth in Richmond Sept. 8 before travelling to play North Carolina-Greensboro on Sept. 11.