Home Variety Campus Events A new translation of Homer: “The Odyssey” gets an update with folk... 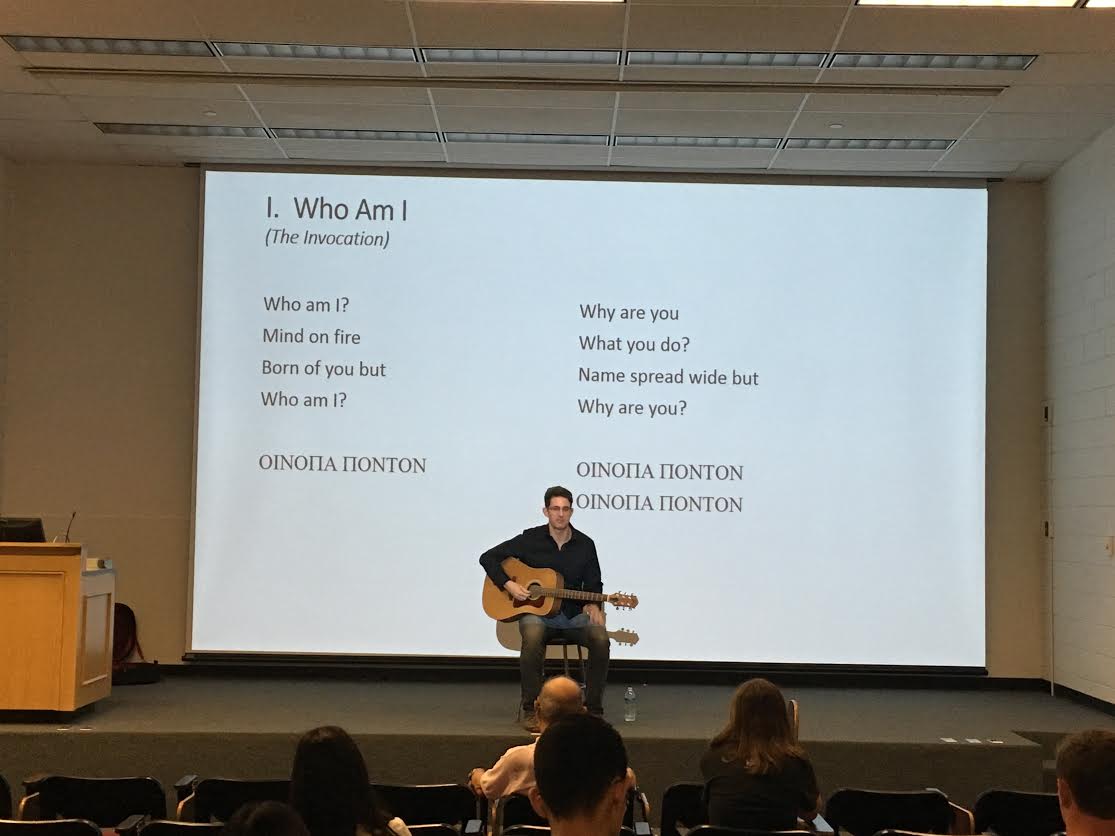 Students and faculty at the College of William and Mary journeyed 3,000 years back to a time when skillful bards sang tales of heroes on mythical quests, the powerful gods who gave them aid and the nefarious villains who stood in their way — all from the comfort of Andrews Hall this past Wednesday.

As their first lecture of the semester, the College’s classical studies, English and music departments chose to co-sponsor a 30-minute original musical performance of Homer’s “The Odyssey” by self-proclaimed modern bard Joe Goodkin. Goodkin, who possesses bachelor’s degrees in classics and ancient Greek from the University of Wisconsin-Madison, tapped into his years of experience with writing and recording original music to create 24 distinct songs relating the struggles and triumphs of “The Odyssey”’s most prominent characters.

“It took about 3 months to write 85 percent of it, and I like to joke that it took 8 years to write the last 15 percent,” Goodkin said. “It wasn’t until about 50 performances in that it settled into what it is today.”

The folk opera was certainly not the classical studies department’s typical lecture. Aiming to kick off the semester in a fun and invigorating way, the department jumped at Goodkin’s offer to share the work he has performed over 200 times in 30 states. His performance at the College was the first in the state of Virginia.

Before beginning the musical aspect of the performance, Goodkin gave a short preamble about the historical precedent of mythology told through song. In the days of the Ancient Greeks, epics as great as that of Odysseus would have been related in a manner similar to Goodkin’s guitar-accompanied performance — that is, memorized and sung by a lyre-playing bard. To illustrate this point, Goodkin referred to a projected image of a scene straight out of “The Odyssey” itself. The black-figure pottery painting depicted a bard singing the ballad of the Trojan War to an overcome Odysseus, who had played a crucial role in that conflict.

“He’s so moved by hearing the songs sung about him and his fellow soldiers, that he’s weeping, and he’s covering up his face to try to hide the fact that he’s weeping,” Goodkin said of Odysseus. “I love this scene because it shows us how powerful these songs were back when they were first performed.”

Each of Goodkin’s unique songs took on a decidedly bluesy tone as he assumed the identities of figures like Odysseus, Athena, Penelope and Telemachus. In taking this personal approach to the characters, Goodkin aimed to make the story more accessible to a modern audience.

“’The Odyssey’ is an exciting and beautiful poem to read, but sometimes the translations of it use antiquated terms, and sometimes, if you’re not familiar with the context, it can be difficult to follow the story,” said classical studies professor Jessica Paga. “By condensing the principal parts of the poem into 30 minutes, Mr. Goodkin has already made the poem more approachable and understandable.”

Professors were excited about the fact that, in addition to the making the story more accessible, Goodkin’s use of both the Classics and music provides an excellent exhibition of the goal of the College’s COLL curriculum — to broaden minds across multiple academic disciplines.

“I really enjoyed it; I have read “The Odyssey” several times but have always wondered about the oral traditions associated with it,” Grace Burns ’20 said. “It was fascinating to see how he brought it to life through music, and showed yet another brilliant aspect of the poem.”

Whether an audience member had read “The Odyssey” a thousand times or had never before heard its tale, Goodkin said he hoped each person left the performance with a new understanding of how ancient texts connect to the world of today.

“It’s a little geeky, it’s a little romantic, but I like to feel connected to a tradition that’s 3,000 years old,” said Goodkin. “As I’m singing and we’re talking about these characters, we do have a through-line all the way back, and it really is the same thing they were doing, in some sense, back then.”