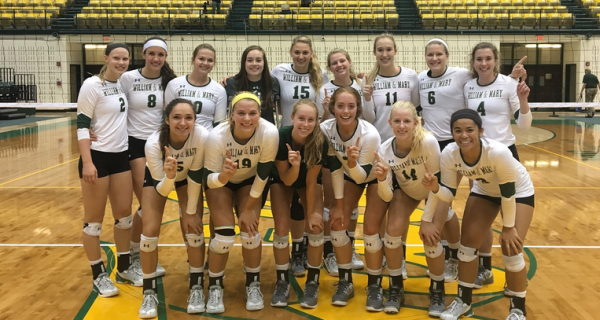 After a 1-5 start, William and Mary stunned the competition with a 3-0 weekend in Williamsburg, winning the Colonial Classic by defeating Charlotte, Western Carolina and Coppin State.

The Tribe (4-5) began Friday night with a 3-1 win over Charlotte (3-4). After falling 25-22 in the first set, the College stormed forward to win the next three 25-16, 28-26 and 25-21. Leading the Tribe was freshman outside-hitter Casey Foote, who had 18 kills and a block. Rookies shone throughout the match, as freshman setter Autumn Brenner led with 55 assists out of the team’s 65. Junior defender Sara Zumbach led the defense with 23 digs.

Rookies shone throughout the match, as freshman setter Autumn Brenner led with 55 assists out of the team’s 65.

Dominance only increased Saturday afternoon when the College defeated Western Carolina in a 3-0 decision. In the Tribe’s first shutout win of the season, the Catamounts (5-5) stood a chance only during one set. The first set ended 25-8, with Western Carolina never getting anything together on offense or defense. Set two was a back-and-forth battle, ending up 33-31 in the College’s favor, 14 serves beyond a regular set. In the final set, the Catamounts wavered while the Tribe stood strong, winning 25-16 to seal the win. Freshman outside-hitter Alex Stein led with 13 kills and a pair of blocks, Brenner had a team-high 20 assists and Zumbach led with 14 digs.

A short reprieve was enough for the College, which then faced Coppin State Saturday night. The Tribe swept the Eagles (0-11) in strong fashion, taking sets 25-19, 25-14 and 25-9. The College’s defensive skills improved with each set, decreasing the points allowed as the match continued. Foote led in kills with 12, also adding a block and an ace. Brenner led in assists once again with 21, while Zumbach hit a team-high 16 digs.

The Tribe remains at home for one more match, taking on Virginia Commonwealth Tuesday at 7 p.m. in Kaplan Arena.