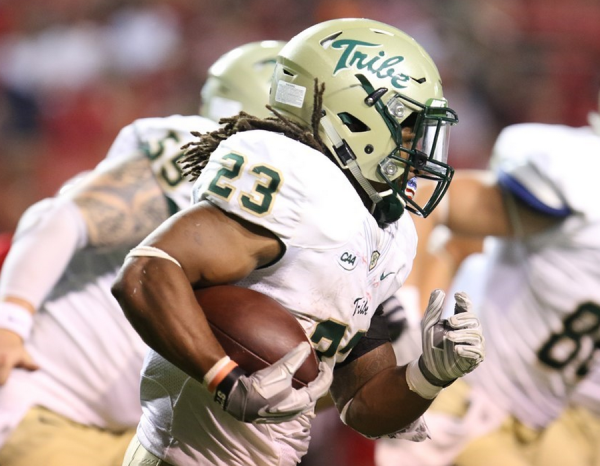 The William and Mary offense looks poised to continue its success in 2016 after its Colonial Athletic Association title last year. The Tribe retains talent at almost every position from the unit that averaged nearly 31 points a game last season, boasting experience in the trenches, backfield and out wide. While the season-opening loss at North Carolina State finished in lopsided fashion, the College’s offensive attack had several strong moments against a Football Bowl Subdivision opponent.  The offense should be primed to put up major points on any Football Championship Subdivision defense and make a run at the CAA crown once again.

“It all starts with the offensive line. Passing, running, whatever it may be,” starting senior quarterback Steve Cluley told Tribe Athletics. “That group of guys is extremely hard-working, and they’re all healthy which is very important.”

“It all starts with the offensive line. Passing, running, whatever it may be,” starting senior quarterback Steve Cluley told Tribe Athletics.

The lone hole in the offensive line is at the center position, vacated by two-time All-CAA performer Andrew Jones ’16. However, if the N.C. State game is any indication, the Tribe has found a replacement with plenty of experience in senior Kevin Jennings. Jennings started at center for the second time in his career against the Wolfpack, having played in every game the past two seasons primarily as a back-up or a part of special teams.

“K.J. [Jennings] is going to step up for us,” Ugokwe told Tribe Athletics. “We feel like we’re not really going to miss a beat. Andrew [Jones] was great for us, obviously, but we feel like we’re ready to go this year again, and have another good year.”

Despite the Tribe’s struggles to put points on the board versus the hard-hitting N.C. State defense, the offensive line turned in a solid performance, allowing only one sack for a loss of seven yards. With all five blockers healthy and working cohesively, the rest of the offense should begin to find the time and space to execute the playbook and find the end zone.

Cluley only managed to complete nine of his 18 pass attempts in the season opener at N.C. State last week, and thus the potential of the Tribe’s receiving unit was not on full display. Nevertheless, the College returns a strong receiving corps from last season and has added plenty of talent to its ranks as well.

Cluley’s primary receiving target will undoubtedly be junior wide receiver DeVonte Dedmon, an All-CAA Second Team selection last season as well as the conference’s Special Teams Player of the Year. Dedmon, who recorded five catches for 75 yards and a touchdown against the Wolfpack, is coming off a breakout year in which he led the Tribe in receptions, his eight receiving touchdowns topping the CAA in that category.

Flanking Dedmon on the outside will be a trio of veteran wideouts: senior Kevin Hart, junior Daniel Kuzjak and sophomore Jack Armstrong. Kuzjak started alongside Dedmon at N.C. State, but Armstrong and Hart should both get regular targets as well throughout the season.

A former top-40 receiving prospect in high school, Christian raised eyebrows with a 53-yard kickoff return in the season opener two Thursdays ago.

Another player that could potentially make an impact in the passing game is redshirt freshman wide receiver Jalen Christian, a transfer from South Carolina. A former top-40 receiving prospect in high school, Christian raised eyebrows with a 53-yard kickoff return in the season opener two Thursdays ago. While he did not record a catch against the Wolfpack, his outstanding athleticism could factor into the offensive attack in the near future.

The Tribe also possesses a talented tight end in junior Andrew Caskin, another preseason all-conference selection. After catching only five passes his freshman season, Caskin finished 2015 with 34 receptions, second-most on the team, and two touchdowns. When the College runs a two-tight end set, as it often does, experienced senior Eric Hensley is in the fold too.

Arguably, the two members of the Tribe offense with the most to prove are the team’s starting quarterback and running back: Cluley and senior Kendell Anderson. Anderson was one of the biggest surprises of the 2015 campaign, rushing for over 1,400 yards and 16 touchdowns and overtaking Mikal Abdul-Saboor ’16 as the College’s primary backfield weapon. After earning All-CAA First Team honors last year and a spot on the preseason all-conference team this season, Anderson must show that last season was not a fluke and that he can continue to carry the bulk of the rushing load with Abdul-Saboor gone. He struggled mightily against N.C. State, clearly nursing a shoulder injury, and it remains to be seen if that will continue to ail him as the season progresses.

Cluley, entering his third and final year at the helm of the College offense, must shake off the end of last season and prove that he can come up big when the Tribe needs him the most. The senior had a decent 2015 season, passing for 2,768 yards and 16 touchdowns. However, he was also intercepted 10 times, eight of those coming in the final three games of the season, namely the two devastating losses at Richmond and the chaotic playoff win against Duquesne. Cluley was also picked off twice at N.C. State, the first coming just when the Tribe had seized momentum back from the Wolfpack. His turnovers have come at the worst times for his team, and his poise in the pocket under adverse circumstances must improve if the Tribe hopes to make a deep run in the FCS playoffs.

“I feel like I’ve matured as a football player,” Cluley told Tribe Athletics. “My football knowledge has grown, [my ability to] prepare for games has grown … I’m just excited to get this season rolling and get this year going.”

“My football knowledge has grown, [my ability to] prepare for games has grown … I’m just excited to get this season rolling and get this year going,” Cluley said to Tribe Athletics.

With talent and veteran leadership all around him, Cluley is under intense pressure to perform up to expectation. It will be fascinating to see how the quarterback responds to adversity throughout the season, particularly in clutch situations where he has often struggled.