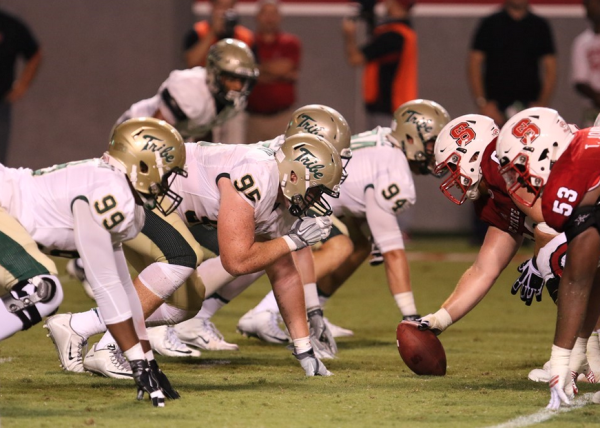 Coming off of its best season in several years, including a Colonial Athletic Association championship and advancement to the second round of the 2015 Football Championship Subdivision playoffs, the William and Mary defense is once again at a crossroads.

Last year’s senior-laden squad graduated five standout starting players from the defense, leaving large gaps where brick walls previously stood. However, six players do return from the starting defense, giving a slightly better than 50/50 split between experienced and inexperienced players. Despite this, the defense appears confident to take over the trenches.

“We gotta get better on special teams and offense,” defensive coordinator Trevor Andrews said to Tribe Athletics. “Defense is holding it down.”

“We gotta get better on special teams and offense,” defensive coordinator Trevor Andrews said to Tribe Athletics. “Defense is holding it down.”

With two games already under the Tribe’s belt, 2016 is a mixed bag. The season opener at North Carolina State left much to be desired, as the Atlantic Coast Conference opponent stomped 521 yards combined between air and ground movement, leading to seven successful trips to the red zone out of eight attempts. One week later, however, the College held Hampton to 334 yards of total offense and had two interceptions in Saturday’s game. After week three’s matchup against Norfolk State, the CAA lays in wait for the Tribe, which brings with it some of the best offenses in FCS football.

“Bill Murray … had an outstanding spring for us at defensive tackle so he’s gonna push for playing time,” head coach Jimmye Laycock said to Tribe Athletics.

The experienced members of the line should be able to aid the newer members of the squad, which will be crucial when it comes to pass rushing the elite quarterback-wide receiver combinations of the CAA such as Kyle Lauletta and Brian Brown of Richmond.

Last year, the three linebackers at the start of the season were Luke Rhodes ’16, Zach Fetters ’16 and Ian Haislip ’16. With a string of injuries for Haislip and Rhodes, senior linebacker Marcus Harvey stepped up, which helpfully leaves the Tribe with a veteran in the middle of the defensive pack. With 1.5 sacks and 25 tackles in 2015, he also will likely increase his contributions, holding down the middle and possibly grabbing some interceptions in pass coverage. Joining him and looking to step up and get playing time are fellow seniors Matt Vlissides and Stephen Lubnow as well as redshirt-freshman Nate Atkins.

“It’s interesting, we lost three seniors, we’ve got four seniors this year,” Andrews said to Tribe Athletics. “So there’s guys that have been here that know what to expect and know what the groundwork has been laid from guys who played before them.”

“Linebacker is the area where we took a pretty big hit in graduation, but Marcus Harvey is back and we can certainly count on him to make a lot of plays all the way across the board,” Laycock said to Tribe Athletics. “We’ve got a number of guys who are going to be competing for the position and really that’s still up for grabs.”

There is a conversation to be had about the depth chart of the linebackers as the College usually utilizes a three linebacker set-up. Sophomore Josh Dulaney is also looking to make a name for himself after two starting nods and a pick against Virginia in 2015 before being injured.

“Linebacker is the area where we took a pretty big hit in graduation, but Marcus Harvey is back and we can certainly count on him to make a lot of plays all the way across the board,” Laycock said to Tribe Athletics. “We’ve got a number of guys who are going to be competing for the position and really that’s still up for grabs.”

The loss of Rhodes, who now plays for the Tampa Bay Buccaneers, provides a gap both in the defense in the leadership of the team, as he was a two-year captain and spirited leader in the defensive scheme.

Last but not least is the secondary, consisting of the cornerbacks and safeties. The safety position took what is likely the largest hit to any position on the team, losing free safety DeAndre Houston-Carson ’16 to the Chicago Bears after he was drafted and went through training camp this summer. Also missing is strong safety Jared Velasquez ’16, who with Houston-Carson provided a secondary quarterbacks were afraid to throw toward.

“We lost an outstanding safety in DeAndre Houston-Carson to the NFL, you don’t just replace somebody like that so hopefully we can find somebody solid,” Laycock said to Tribe Athletics. “We may have to change around what we do because we depended so much on DeAndre last year.”

With those spots open, there are some likely candidates to take them. Redshirt-freshman Corey Parker, hailed as STATS FCS Freshman Player of the Week after game one, already has an interception under his belt and led the team in tackles in the first game against the Wolfpack. Parker recently took on the safety role in the spring after formerly working as a cornerback. The other safety slot is a battle between juniors Mike Barta and Richie DiPietro, who both made strong appearances last season with key blocks and game-saving picks.

“We lost an outstanding safety in DeAndre Houston-Carson to the NFL, you don’t just replace somebody like that so hopefully we can find somebody solid,” Laycock said to Tribe Athletics. “We may have to change around what we do because we depended so much on DeAndre last year.”

The Tribe returns four veterans at cornerback, most notably senior captain Trey Reed. Reed is joined by junior Aaron Swinton, who missed most of last season due to injury, sophomore Raeshawn Smith and junior Denzel Dykes. If Swinton and teammates stay healthy, the secondary still has the potential to stand as one of the best in the FCS.

Overall, the Tribe defensive outlook is largely speculation at this point. The experience level of the defense is a strong attribute, but execution was a worry late in 2015 when the defense allowed almost 100 combined points between Duquesne and Richmond in the two playoff games. However, Laycock didn’t seem as concerned with this as he was with low offensive production. Nonetheless, to win, a team can’t just score a lot of points, it needs to make sure the other team does the opposite. N.C. State could have been a fluke against a superior opponent when the Tribe gave up 48, or it could be a concerning sign that the defense needs work. As the season progresses, this will be the unit to watch, despite Andrews’ declaration that the offensive and special teams units need to work harder.