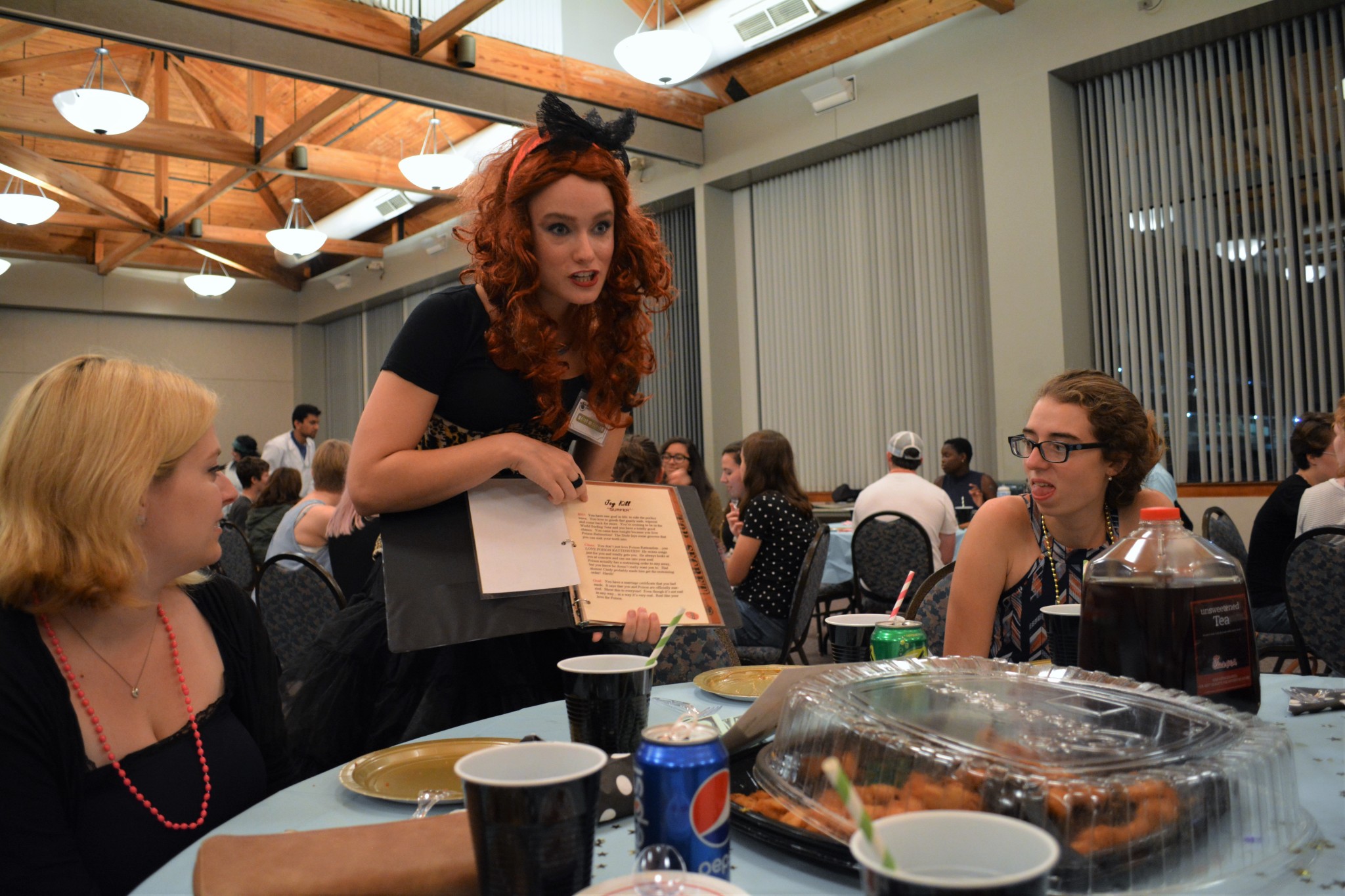 Laughter is not a word usually associated with murder, but with AMP it can be. A larger than life rock star, obsessed groupies, a jealous girlfriend and a Swedish model all came together in the Sadler Center on Saturday night, resulting in a dead manager and a night of laughs.

The whole theatrical night was put on by AMP with the participation of the actors from the Murder Mystery Company, based in Baltimore. The event was accompanied by a Chick-fil-A  catered dinner and sweet tea , fueling the attendees for the drama-filled night.

According to those in attendance, the star character was Poison, an over-the-top British rock star and the man of the hour.

“He was a womanizer and was very well played” Sean Singh ’20 said of Poison. “His humor brought it all together.”

It was Poison’s own manager who was murdered, and later one of his groupies was killed off as well. The rocker had one ex-wife, a current wife and a girlfriend on the suspect list. Along with the murders, the night involved improvised songs and performances that got students involved.

The Murder Mystery Company offers 13 different themes as options. The one chosen for this event was the ‘80s theme.

“One of our most fun, it’s like a rock concert,” Sambuco said.

Silly names were another part of the package, such as Joy Kill who was Poison’s current wife, Olivia John, who made fitness tapes, and Cindy Leapyear, Poison’s famous girlfriend. Colors were bright and music was loud and tables sang along with the tunes. The students who were chosen to become part of the story were given funny accessories for the others to identify them. A student character named Annie Fannie wore a Cheshire Cat hat, Skull had a big top hat with a long, dark-haired wig attached, and Cindy Leapyear wore sparkly, large purple sunglasses, like the rock star she was.

The mystery aspect of the event also kept students engaged. Rachel Vallejo ‘20 came to the dinner looking for a challenge.

The whole crowd got into the investigative game. Gasps and laughs were shared throughout the night while students bribed the suspects for clues with money or information they had.

Singh was one of the few students chosen to become a part of the story as Dr. Joe King. Singh said the only pitfall was that he didn’t get the best actor award, one of several awards that the Murder Mystery Company gave out at the end of the night.

At the end of the night, the College of William and Mary got to keep its nerdy reputation intact, as most of the tables chose the correct person, Cindy Leapyear, as the murderess. The table that took the longest to guess unfortunately still chose the wrong suspect and was awarded a special prize by the Company for coming in dead last place.