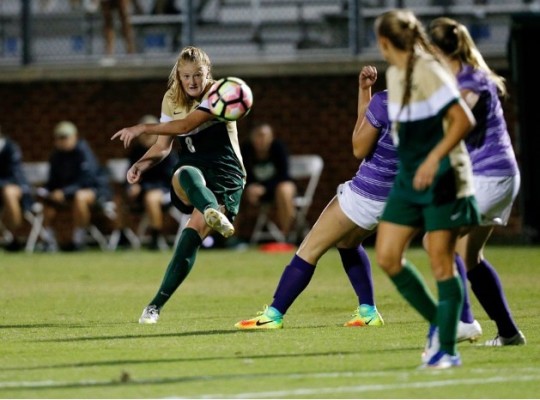 In the last weekend before the 2016 Colonial Athletic Association Championship, William and Mary lost to North Carolina-Wilmington and tied Charleston. With the results, the Tribe finishes the regular season in fifth place in the conference and looks ahead to next week’s playoffs.

The game began after a lengthy weather delay, starting in an expectedly sleepy way on both sides. The first half was a plodding affair, as the squads only fired five shots in the period combined, focusing more on control of possession than generating offensive openings.

Play sped up in the second half as both the Tribe and the Seahawks had chances. Putting pressure on from the beginning of the half, UNC-Wilmington forward Serenity Waters took advantage of a breakaway in the 56th minute to give the Seahawks a 1-0 lead.

As the Seahawks tried to add to their lead, the Tribe defense stood tall. Junior goalkeeper Samantha Johnson — who had three saves on the night — and the back line cleared multiple corner kicks to keep the game close.

Junior goalkeeper Samantha Johnson— who had three saves on the night — and the back line cleared multiple corner kicks to keep the game close.

The Tribe stayed aggressive despite the deficit, but its advances were stymied every time. Junior midfielder Rachel Moore and senior forward Kady Kriner both had late shots, neither shot resulting in a goal.

Both teams had seven corner kicks throughout the game. UNC-Wilmington led the Tribe 9-6 in total shots. Despite the 2-0 loss, the Tribe still retained a chance to make the CAA playoffs with a win in its regular season finale Sunday.

Sunday’s game, a tie at Charleston, was decided by a penalty kick by Moore in the 73rd minute. The Cougars (10-6-3, 3-3-3 CAA) and the Tribe would eventually draw 1-1 after double overtime.

Charleston controlled the first half, getting off four shots. In the 32nd minute, the Cougars grabbed the lead with a low shot from Charleston forward Laura Ortego getting past Johnson. The Tribe pushed back with three shots of its own, gaining some momentum going into halftime.

The Tribe continued its push coming out of the break. Freshman midfielder Charlotte Hyland and junior forward Sami Grasso both had scoring chances that ultimately proved fruitless. The Tribe’s work finally paid off when Charleston committed a foul inside the box. Moore would notch the equalizer on the following penalty kick.

Moore’s goal would end the scoring, though both teams fought for the win. Redshirt junior goalkeeper Grace Smith, relieving Johnson during the match, made a key stop in the late stages of regulation. Although the Tribe controlled most of both overtime periods and had two shots, it couldn’t find the back of the net.

Sunday marked the last day of the regular season for the CAA, leaving the conference tournament seeds set. The Tribe earned the No. 5 seed of the six possible slots, a fall from the preseason No. 1 seed it was favored to earn. UNC-Wilmington earned the No. 4 seed with a win Sunday and will host the Tribe again Oct. 30 for the CAA quarterfinal. Charleston also earned its first CAA tournament berth with the draw as the No. 6 seed and will play No. 3 seed James Madison. Northeastern won the regular season title and the No. 1 seed while Drexel is the CAA runner-up and No. 2 seed in the tournament. The top two seeds earn byes for the quarterfinal and Northeastern will host the semifinals and final in Boston the weekend of Nov. 4.