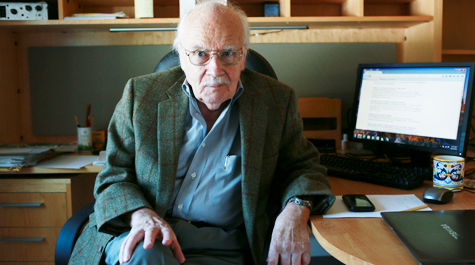 Physics professor Charles Perdrisat became the third professor at the College of William and Mary to receive the Tom W. Bonner Prize in Nuclear Physics on Oct. 11.

The award, given out annually by the American Physical Society since 1964, recognizes an individual nuclear physicist for innovative excellence in his or her field of research and grants the recipient a $10,000 stipend.

On some occasions, the award is shared between physicists.

Nominees are recommended by multiple colleagues who advocate on their behalf through a nomination process.

Physics professor Carl Carlson ’62, who nominated Perdrisat, emphasized the rarity of the Bonner Prize and what it means for the College.

t’s a big thing,” Carlson said. “There are not so many schools that can say they have somebody who has won a Tom Bonner Prize. We’ve been lucky here … There are very few that have won and we have three [recipients].”

“It’s a big thing,” Carlson said. “There are not so many schools that can say they have somebody who has won a Tom Bonner Prize. We’ve been lucky here … There are very few that have won and we have three [recipients].”

Physics professor Robert McKeown, the 2009 recipient of the Bonner Prize, suggested that Carlson should nominate Perdrisat for the award. McKeown was preceded by physics professor John Dirk Walecka in 1996, who was the first at the College to receive the award.

According to a press release from the APS, the Bonner Prize was given to Perdrisat for “groundbreaking measurements of nucleon structure, and discovering the unexpected behavior of the magnetic and electric form factors of the proton with changing momentum transfer in electron-proton scattering.”

Perdrisat, who has been a member of the physics department at the College since 1966, utilized a new technique during his research at Jefferson Lab to find the behavior of form factors, which shows how both the electrical and magnetic material inside a proton is distributed.

Perdrisat, who was unable to be reached because he is working out of the country for an extended period of time, said in a press release that the technique used at the JLab helps tell the value of the ratio of the two form factors.

“In the technique we used at JLab, we sent polarized electrons on an un-polarized hydrogen target, and measured the polarization of the recoiling proton,” Perdrisat said in a press statement. “The amount of polarization transferred from the electron to the proton tells us the value of the ratio of the two form factors.”

During his time at the College and working for JLab, Perdrisat has served as a mentor for many students and colleagues and has shaped their futures as physicists, according to physics professor Edward Brash of Christopher Newport University. Brash, who worked with Perdrisat during his experiments at JLab, praised his mentorship.

“I’ve worked with Charles for, as I’ve said, over two decades,” Brash said. “He has been a mentor to me for a long time, and to have one of my mentors recognized is an amazing thing. It’s a very special honor. I really am very proud of him and I have a tremendous admiration for the work he has done over his career.”

Carlson said that Perdrisat had a great influence on his early years teaching at the College. Carlson was the second individual to teach the course Physics in Music, after Perdrisat.

Though Carlson was nervous that the course would not go well, he was able to succeed with the help of Perdrisat’s guidance and thorough notes.

“Part of what it means to be a good experimental physicist is to document what you do,” Carlson said.

Brash said that he believes Perdrisat was fully deserving of the honor, citing that he carried out his work in nuclear physics with grace and humility.

He’s really created another generation of physicists who will continue to pursue this area of research, which, not only do we think is important, but, in fact, many people in the world think that it is very, very important,” Brash said.

“He’s really created another generation of physicists who will continue to pursue this area of research, which, not only do we think is important, but, in fact, many people in the world think that it is very, very important,” Brash said.