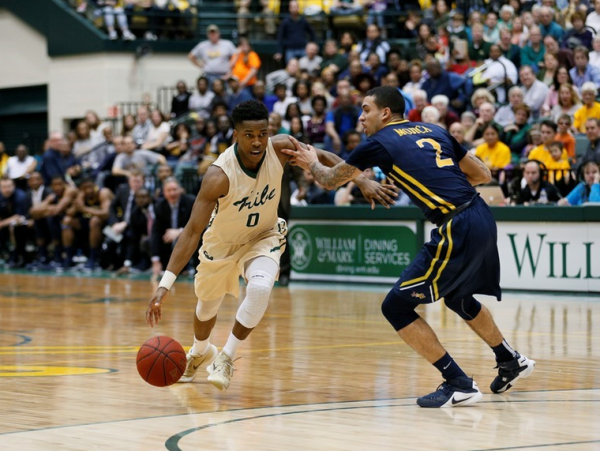 With mere seconds left on the clock in the 2015 Colonial Athletic Association Championships semifinals, guard Marcus Thornton ’15 found then-sophomore guard Daniel Dixon open in the corner. The rest, as they say, is history. Dixon would knock down the most meaningful three-pointer in recent William and Mary history, sending the Tribe to the conference championship and establishing Dixon as a household name on campus.

However, the story of the senior guard’s ascent from a freshman with potential to a captain, preseason all-CAA pick and impact player cannot be told in just one moment, albeit a special one. Instead, it is much more the story of consistent growth.

“I think my whole career has been a steady increase each year,” Dixon said. “I feel that every year I’ve gotten better in some area.”

I think my whole career has been a steady increase each year,” Dixon said. “I feel that every year I’ve gotten better in some area.”

His freshman year, Dixon came off the bench for the Tribe. He averaged 3.5 points per game in just under 13 minutes per game. Even when he first began his collegiate career, Dixon showed flashes of the player he would become. He scored 15 points against Delaware and nine against North Carolina-Wilmington.

His sophomore season, he moved into a starting role. For the most part, Dixon played well, working on his offensive game. He scored 11.1 points per game while sharing the backcourt with Thornton.

Last year, he boasted a more well-rounded game. Dixon set career highs in assists, rebounds and blocks, even as he increased his scoring average to 12.5 points per game.

This season, Dixon will be asked to shoulder a larger load, as key players who graduated, such as guard Terry Tarpey ‘16 and forward Sean Sheldon ’16, leave holes that will be hard to fill. Tarpey was a two-time CAA Defensive Player of the Year; Sheldon acted as the team’s go-to big man. Both were considered team leaders. Dixon, along with senior forward Omar Prewitt and junior guard David Cohn, will not only have to replace them on the court, but also in the locker room.

“We’re obviously different players than [Tarpey and Sheldon], but I think we all bring something to the table,” said Dixon. “I feel like we have a lot of good guys and a lot of talented guys to fill that void.”

Dixon fits both of those criteria. Soft-spoken and humble, yet confident and hard-working, Dixon was named a team captain by head coach Tony Shaver. He possesses a lethal three-pointer: His shooting percentage of 39.5 percent from downtown ranks fifth all time in Tribe history.

This year, he has a chance to take another step forward. He was bothered by a wrist injury that forced him to miss a game last season, but now, Dixon finally feels good again.

“This is the first preseason where I’ve — knock on wood — been healthy,” said Dixon. “That just helps in a lot of different areas. I’ve never had that, so it’s definitely a big change.”

This is the first preseason where I’ve — knock on wood — been healthy,” said Dixon. “That just helps in a lot of different areas. I’ve never had that, so it’s definitely a big change.”

As for his expectations for himself, Dixon takes each game as its own challenge.

“Individual goals, you know, I don’t really look for those much,” he said. “I just kind of go out there one day at a time.”

However, he made it clear what was on his mind. As most Tribe basketball fans know, the College is part of a select group of schools that have never made it to the NCAA Tournament. Predictably but passionately, Dixon has made that his only goal for the year.

“I don’t know if this is an individual goal, but it’s to win a championship. That’s the ultimate goal, for sure,” Dixon said.

Of course, the Tribe has an entire regular season to put itself in the best place possible to make a deep run into the postseason. That season begins with the toughest non-conference schedule that they have played in years, including preseason nationally-ranked programs: No. 1 Duke, No. 13 Louisville and No. 23 Rhode Island. Dixon, nevertheless, holds that the team is ready and looking forward to this difficult stretch.

“I think it’ll help prepare us for CAA play and things like that down the road,” he said. “At the end of the day we go in there to take care of business, so it’s not like we’re starstruck or anything.”

Daniel Dixon has never had a problem with being starstruck, proven by his clutch shot in the CAA semifinal game. But few remember the ending of the anecdote.

Down by 22 with less than four minutes to go against Northeastern in the championship game, the Tribe made an improbable 16 to zero run. Dixon and Thornton scored 14 of those 16 points. Yet, it was too little too late, and the favored Tribe let history slip through its grasp.

If nothing else, Dixon is determined not to let that happen again.