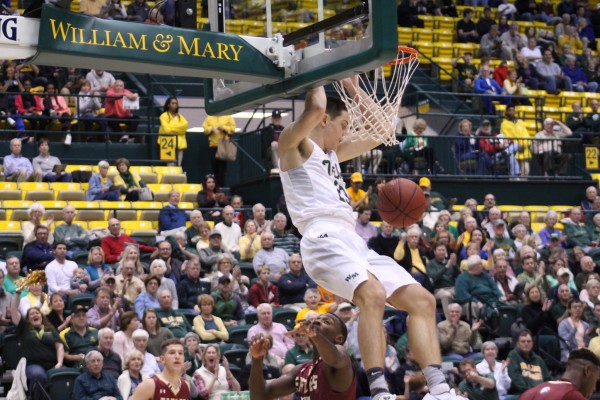 From just the 96-44 scoreboard, the fact that William and Mary dismantled an objectively inferior opponent shouldn’t mean much, especially with three road games against ranked opponents on the nonconference slate. However, the impact of two freshmen, guard Justin Pierce and forward Nathan Knight, indicates that the Tribe is a deep team with young players ready to make an instant impact.

“I thought our guys played well,” head coach Tony Shaver said. “Truthfully, we did what we should’ve done. We had more talent. We had more size. But, what was really pleasing to me is how hard we played regardless of the score.”

I thought our guys played well,” head coach Tony Shaver said. “Truthfully, we did what we should’ve done. We had more talent. We had more size. But, what was really pleasing to me is how hard we played regardless of the score.”

The Tribe (1-0) did not start the game strong, turning the ball over four times in the first six minutes, including two turnovers from junior point guard David Cohn. Bridgewater (0-1) was down just 14-7 at this point, but quickly found themselves severely undersized and outmatched, as the Tribe cruised to a 96-44 win in which it held a 56-point lead at one point.

After the slow start, a lineup sparked by Pierce and Cohn led the Tribe on an 18-6 run to take a commanding 32-13 lead with just under seven minutes left in the half. During the run, Pierce demonstrated his versatility; crashing the offensive glass to put back a miss for his first career collegiate points, following it with a textbook cut to the rim, where he finished with a thunderous dunk. Pierce appeared pleased with his individual performance, but remains focused on the team as a whole and still sees room for improvement.

“Coming in as a freshman, I’m just going to do whatever it takes to help the team,” he said. “Defense is the biggest thing I have to work on.  I didn’t have to do too much with that in high school.”

After the big run, the Tribe was still not done with the offensive barrage, pouring on a 15-2 run in the final 3:10 of the half to take an insurmountable 55-22 lead.

The second half went largely the same as the first, with the College sharing the ball and finding shots in a variety of places. Shaver was quick to insert substitutes; 12 players earned at least five minutes of playing time. No Tribe player played more than 21 minutes, a good sign since the Louisville game on Monday is a quick turnaround for the team.

The Tribe played well on the inside, with junior forward Jack Whitman and Knight controlling the paint. Each finished with eight points to manufacture a 52-28 Tribe advantage in points in the paint. Knight added five offensive rebounds, keeping plays alive and leading the Tribe to a 20-6 edge in second-chance points.

Despite Bridgewater never getting closer than 33 in the second half, Shaver was pleased with the Tribe’s effort in a lopsided game.

“We’ve got a 30-point lead and Daniel Dixon’s diving on the floor for a loose ball,” he said. “I was really proud of Daniel, of all of the guys.”

The contributions and effort from the freshmen duo did not go unnoticed by Shaver, particularly Pierce.

“He’s ultra-confident, really believes in himself,” Shaver said of Pierce. “He’s a young guy that in practice, it doesn’t matter whether he perceives himself on the first team or second team. He plays the same way.”

He’s ultra-confident, really believes in himself,” Shaver said of Pierce. “He’s a young guy that in practice, it doesn’t matter whether he perceives himself on the first team or second team. He plays the same way.”

Shaver and the Tribe hope the contributions from the emerging stars continue as the nonconference schedule intensifies. Following a nationally-televised Monday showdown with Louisville, the Tribe hosts Presbyterian at 7 p.m. on Saturday before traveling to No. 1 Duke next Wednesday.