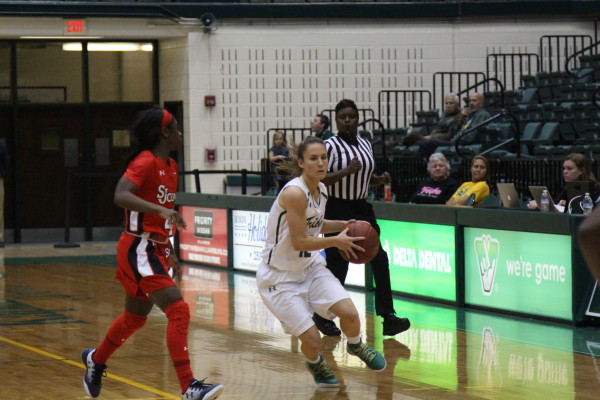 Midway through the third quarter of its season opening game against St. John’s Sunday afternoon, William and Mary pulled within two points of the reigning Big East champions. By the end of the quarter, the Red Storm lead had ballooned to 18, and the Tribe ultimately fell 73-57, showing plenty of promise as well as leaving a lot of room for improvement.

In a contest few expected the Tribe (0-1) to win, the Tribe never held the lead, but made several momentum-seizing runs which kept the game competitive. Head coach Ed Swanson was encouraged by his team’s performance, but recognized the Tribe has plenty to work on as the season progresses.

“I thought we did some really great things today, I really do,” Swanson said. “Offensively, we hit the offensive glass better than I think we’ve done in my career here, so I was really excited with the energy and the focus that we played with … but 18 turnovers for us is really uncharacteristic, and I think that was the story of the game.”

I thought we did some really great things today, I really do,” Swanson said.

Both teams played at a frantic, up-tempo pace from tip-off, resulting in the high number of turnovers. The Tribe coughed the ball up 18 times, which led to 27 St. John’s (1-0) points, while the Red Storm committed 20 turnovers, which the Tribe turned into 21 points. St. John’s adapted to the breakneck speed of the game quicker than the College in the first half, leading by as much as 17 in the second quarter.

Despite the significant deficit, the Tribe fought back into the game with a 10-0 run from the 6:09 to 3:26 mark, and went into halftime trailing 34-26. Freshman forward Victoria Reynolds played a key role in the comeback effort, contributing seven points, four rebounds and a steal in her first collegiate game.

The College came out of the halftime break with a burst of energy, pulling within two points of the Red Storm with 4:54 left in the third quarter. Senior forward Alex Masaquel, who led the Tribe in points along with senior guard Marlena Tremba with 13, spoke about the team’s intensity to open the second half.

“We were just playing together with more fire, more passion,” Masaquel said. “We knew that we were just as good as them, and we just needed to push through, and I think that’s what we did in the second half.”

St. John’s reasserted its will on the Tribe as the third quarter came to a close, finishing the period on a 20-4 run. Five different Red Storm players scored over that stretch, a testament to their depth and offensive talent. St. John’s knocked down over 56 percent of its field goal attempts, including 7-14 from three-point range, with the bench scoring 30 of the team’s 73 points.

We were just playing together with more fire, more passion,” Masaquel said. “We knew that we were just as good as them, and we just needed to push through, and I think that’s what we did in the second half.”

On the flipside, the Tribe struggled on offense against the length and athleticism of the Red Storm defenders, shooting less than 34 percent from the field. Knocking down three-pointers proved a particularly challenging task, as the College shot 3-17 from long distance, Tremba contributing all three.

“I don’t think I got any just catch-shot looks, I think I had to work for pretty much every shot, whether it was off the dribble or someone setting a screen for me,” she said after the game. “They’re long and athletic, so it was pretty tough looks. I was always contested, I felt.”

The Red Storm maintained its double-digit advantage for the majority of the fourth quarter, denying any hope of a Tribe comeback over the final 10 minutes to clinch the 73-57 victory. Red Storm forward Jade Walker led all scorers with 18 points, asserting her will on both ends with seven rebounds and a game-high four blocks.

The Tribe will look to bounce back from this opening day defeat when the Tribe host in-state rival Richmond at Kaplan Arena Friday evening. Tip-off is scheduled for 7 p.m.