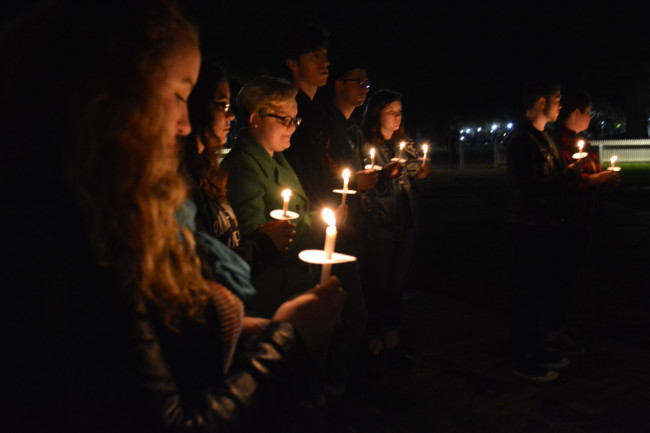 Students and community members gathered in the courtyard of the Sir Christopher Wren Building at 7 p.m. Nov. 10 to show solidarity with the Standing Rock Sioux Tribe in North Dakota and their indigenous-led efforts to halt construction of the Dakota Access Pipeline.

Director of Education for the Williamsburg Unitarian Universalist Circle Austen Peterson addressed those who had gathered in the Wren portico and provided historical context and words of solidarity with the protestors in Standing Rock.

These protestors have been locked in a legal battle to stop the Dakota Access Pipeline from impacting their community’s cultural and natural resources and access to water. The DAPL, owned mainly by oil and natural gas company Energy Transfer Partners, would be a roughly 1,200-mile long pipeline which could transport crude oil from North Dakota to Illinois. Protestors are trying to halt the construction of the pipeline, which ETP aims to complete by early 2017.

According to Peterson, the DAPL raises concerns over the environmental protection of water sources, threatens to disturb sacred sites and artifacts, and raises the broader issue of tribal sovereignty. The current proposed pipeline route crosses under Lake Oahe, located less than a mile away from the Standing Rock Sioux Reservation.

Peterson explained that the construction of the DAPL is an example of environmental racism.

The construction of this massive North Dakota pipeline stretching from North Dakota to Illinois is a textbook case of marginalizing minority communities in the drive to increase fossil fuel supplies,” Peterson said.

“The construction of this massive North Dakota pipeline stretching from North Dakota to Illinois is a textbook case of marginalizing minority communities in the drive to increase fossil fuel supplies,” Peterson said.

Peterson also addressed the recent results of the presidential election, and acknowledged that many people might feel fearful because of some of the rhetoric from President-elect Donald Trump during his campaign, but that it’s important to stand in solidarity with all marginalized communities.

“I’m here to tell you this community is here to stand together in solidarity with each other,” Peterson said. “Every person on this planet has inherent worth and dignity, and nobody deserves to be belittled, battered, grabbed or shamed.”

After Peterson’s remarks, those present lit candles and reflected in silence for a few minutes. Following the silent contemplation, people were encouraged to share remarks with the crowd.

Trevor Harris, a Black Lives Matter organizer in Williamsburg, criticized the lack of national media coverage of Standing Rock, comparing the importance of preventing the construction of the DAPL to something closer to home.

“It just so happens that I talked about this very subject earlier today in [professor Kara Thompson’s] class, and the one phrase that really stood out to me, and I believe the class, is that, can you imagine what would happen if someone said, ‘Let’s build a pipeline through Arlington Cemetery,’” Harris said. “Just think about that. Think about the repercussions. Think about the news coverage. Think about how many people would respond to that.”

Ellie Dassler ’17 spoke about the importance of cultural heritage preservation within the context of the DAPL protests, which she believes is one of the less broadly discussed facets of this issue.

“Cultural heritage is an intrinsic part of everyone’s identity, but there are certain identities that, are paid less attention to, or are given less of a stage. And because most people can take that for granted, cultural heritage issues don’t make the national news very often,” Dassler said. “So the fact that the water protectors at Standing Rock have is representative of something I think we can keep in mind in the future, that this happens to people all over the world and doesn’t always get a lot of exposure.”

Some people in attendance came to learn more about the Standing Rock protests, like Chris Hecq ’17. Hecq explained that as a queer-identifying person, he believes that it is important to listen to other marginalized voices.

“I don’t know as much as I could about this cause, but I want to put myself in a situation where I get to listen and learn,” Hecq said.

While the protests against the DAPL continue at Standing Rock, other campus initiatives are attempting to increase awareness of this issue. This Friday, Nov. 18, at 6:30 p.m. in Tucker Theater there will be an in-depth discussion, fundraiser and solidarity gathering organized by students and faculty which will feature remarks from history professor Andrew Fisher and professor of English and American studies Kara Thompson. The American Indian Student Association will also continue their fundraising efforts.

“We’re here to protect water in North Dakota, but also all across this planet.” Peterson said. “We are here to honor the water guardians right now who are camping out in cold, and I mean really cold, North Dakota winter, and tonight we are here to say to the generations that come that after us … we honor now the sanctity of Mother Earth, we honor each and every human being’s right to clean water.”