Home Latest News Academics From ballot to budget: Panelists explore how the Virginia General Assembly will... 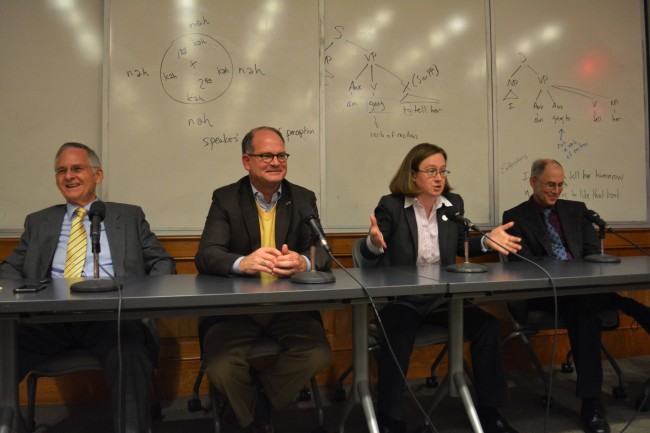 In the wake of Virginia’s $1.5-billion-dollar budget shortfall and 7.5 percent proposed cuts to public colleges and universities, students had the opportunity to meet legislators in the Virginia General Assembly and faculty at the College of William and Mary to discuss the political backdrop of higher education funding.

To provide a numerical context for the conversation, Feldman gave a presentation on the decline of the real value of state funding for higher education, a comparison between surrounding states and the impact of politics on funding.

Since 1990, educational appropriations per full-time student has followed a procyclical pattern, rising during economic expansions and falling during economics contractions. However, the general trend is one of decline, with educational appropriations falling from $8,028 in 1990 to $4,930 in 2015. Net tuition revenue per full-time student has picked up the shortfall, rising from $3,534 in 1990 to $8,038 in 2015.

For comparison, North Carolina’s state appropriation per full-time student in 2015 was $8,109, nearly twice the amount of Virginia’s. The only surrounding state with a similar appropriation to Virginia is Delaware — West Virginia, South Carolina, Maryland and Georgia all pay more per student.

“Politics does in fact matter,” Feldman said. “It’s not all driven by the different incomes of states. It’s about politics.”

“Politics does in fact matter,” Feldman said. “It’s not all driven by the different incomes of states. It’s about politics.”

According to panelists, state revenue has become more volatile than the aggregate economy in the last 25 years. Following the dot-com bust and the 2007-2008 financial crisis, Virginia revenue has swung, reflecting the considerable effect of politics on state appropriations.

“This kind of volatility in state budgets wreaks havoc with the planning that goes on inside the public universities, and it wreaks havoc on the budget in state higher education,” Feldman said.

The effect of higher education cuts for different Virginia college differs with the reliance of the institution on state funding. For institutions like the College, with a lower reliance on state resources, a 7.5 percent cut affects institutions with a high percentage of their resources from the state less.

However, for all Virginia public institutions, swings in state support make an impact.

In Virginia, the governor is required to create a plan to balance the state budget. When shortfalls occur during the middle of the academic year, it is difficult or nearly impossible for public institutions to make up for the resulting budget cut to higher education.

“And so in the middle of the academic year, we’re going to [tell public universities] to cut expenditures 7.5 percent and we don’t want them to raise any tuitions or fees … it really is a conundrum,” Norment said.

In response to a question about whether the higher education funding problem in the General Assembly was a political one, panelists noted that Republicans do tend to be more fiscally conservative. However, the main problem discussed was a spending constraint.

Often, cutting higher education is more palatable to legislators than cutting funding for other institutions and programs, according to Feldman.

“One of the reasons higher education often faces cuts is that it does have a dedicated revenue source, and it’s called tuition,” Feldman said. “And we hear from Republican and Democratic governors alike when they have to cut the budget, ‘Do no harm. Do no harm to the students by raising tuition,’ to which I often point out — by not raising tuition we also do harm to students.”

Feldman continued by pointing out that two-thirds of students in the economics department are taught by professors who are not permanent faculty members.

“There’s a reason for that,” Feldman said. “We don’t have the resources to provide long-time full-time teacher-scholars to our students.”

Continuing the thread of finances specific to the College, panelists addressed the high student fees of the College compared to other Virginia public institutions.
Bradford discussed the difficulty of comparisons between institutions.

“On every college campus, there are places where we could be making better decisions,” Bradford said. “But there have been studies that show that we are mostly doing a really good job. I think part of the challenge in Virginia is that we are so autonomous and so it’s really hard to compare [public institutions]. And so with the student fee issue, it’s almost impossible to compare.”

Mason made a distinction between the size of the student body at different Virginia institutions.

“We’re pretty much busting at the seams … We can only get but so much bigger,” Mason said. “So when you compare our student fee to James Madison, boy, we look like we’re off the charts expensive, but they have what, 17,000 students?”

Although recent legislation has attempted to increase the in-state proportion to 75 percent, panelists agreed that this would be detrimental for the finances of both the state and Virginia public institutions.

As Senate Majority Leader, Norman said he has and will continue to fight this legislation.

“When you have a recessionary period … and funding is reduced, could you imagine what the impact would be if you reduced the number of out-of-state students that you’re allowed to accept?” Norment said. “In effect, out of state students balance the budget, so if you have to take 10 percent more in-state students, that has a financial impact on the operations of William and Mary.”

“When you have a recessionary period … and funding is reduced, could you imagine what the impact would be if you reduced the number of out-of-state students that you’re allowed to accept?” Norment said. “In effect, out of state students balance the budget, so if you have to take 10 percent more in-state students, that has a financial impact on the operations of William and Mary.”

Although budget shortfalls will continue to threaten state support for Virginia institutions, panelists encouraged students to take away that they have proponents in the General Assembly.

“This is the first time that I can ever recall where there have been two state senators that live in the same community … and are both fierce advocates of higher education and fierce advocates of the College of William and Mary,” Norment said. “This is really a special opportunity for William and Mary to have much more of a unified and assertive voice than I can remember at any time.”