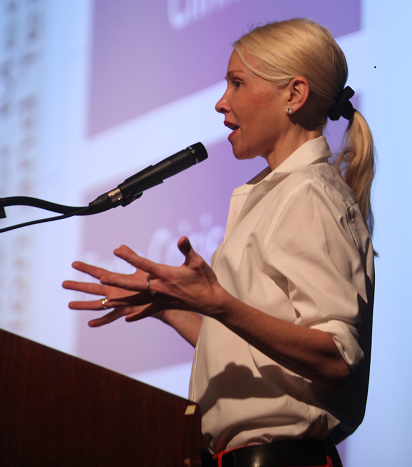 In the 1990s, rape was still thought of by many as an act committed by strangers in the night. Few people accepted that rape could occur between two people who knew and trusted each other. When Katie Koestner ’94 spoke out about being raped while a freshman at the College of William and Mary, she changed the conversation about sexual assault.

From her experiences in college, Koestner built her life’s work around activism.

Today, she serves as the executive director for Campus Outreach Services and for the Take Back the Night Foundation. She speaks at high schools and colleges across the country, educates students on sexual assault prevention and critiques school handbooks to help improve sexual assault policies.

Koestner, who describes herself as a passionate person from a sheltered background, arrived at the College from Harrisburg, Pa. intending to double major in Japanese and chemistry and eager to have new experiences.

Shortly after she arrived, she met a fellow student who caught her interest.

“I thought he was smart, savvy, talented, congenial, he seemed to have instant friends going around, he could sing, he could play the piano, he played a great game of soccer. He was a lot of things, to me, that I thought were really intriguing,” Koestner said.

About a week and a half after meeting him, they went out to dinner.

“He took me to this really fancy French restaurant, and paid for dinner and bought champagne,” Koestner said.

Koestner said that after the date she invited him back to her room because she wanted to spend time alone with him. Once they were alone, he pressured her to have sex. But Koestner, who wanted to wait until marriage, repeatedly told him she didn’t want to.

“I told him no every which way I could without kicking him where it counted,” Koestner said. “I never even thought about doing that, quite honestly, because no one had ever talked about these guys out there that might try to steal your virginity. No one warned me. I told him no at least a dozen times. But he didn’t listen and I became the victim of rape.”

Koestner said she knew what had happened to her had been rape, but not everyone saw it that way.

According to Koestner, at that point in time many people believed that when a girl invited a guy back to her room, she deserved whatever happened to her. Still, Koestner was determined to prove that an injustice had occurred.

When she reported her sexual assault to the William and Mary Police Department, a College hearing officer found her assailant guilty of emotional coercion, meaning that he emotionally pressured, not physically forced her, into having sex. In accordance with Virginia’s Rape and Sexual Battery laws, coercion is included in the definition of sexual assault.

Her assailant denied her account of the incident, and despite the College’s finding, he was allowed to continue his studies at the College.

“I was feisty, and I was distracted by the injustice. I was mad at not having my virginity. I was mad that nothing seemed to be done, and that is how I found the courage to speak out,” Koestner said.

Koestner’s case became the subject of conversation in the years that followed.

Faced with the prospect of seeing her rapist around campus if she stayed at the College, Koestner transferred to Cornell University in 1991 for the fall of her sophomore year. While at Cornell, she became involved with a rape crisis center and helped rewrite the university’s sexual assault policy.

In January 1992, when Koestner heard that her rapist had been asked to withdraw following an alcohol-related offense, she re-enrolled at the College.

He would later be readmitted, but Koestner decided to stay at the College.

After returning to the College, Koestner dealt with harassment from her peers and inconsistent support from administrators.

When students wrote messages, including “Katie Koestner is a slut” and other explicit terms, in permanent marker in Earl Gregg Swem Library, she went to the then-dean of the office of student activities. She told him that according to the handbook, all signs needed to be approved by his office, so the graffiti attacking her character was clearly in violation of school policy.

“I went in there and said, ‘You know there are a lot of these postings on campus about me, that haven’t been taken down, and you all are really good at taking down signs, but all the signs that have anything to do with me, they don’t come down’,” Koestner said, describing the confrontation. “And he’s like, ‘Katie, what do you want us to do?’ ‘Well, those slanderous, horrible, harassing things that are up all over campus, maybe you should paint the walls and put up some artwork in Swem Library’.”

In response, the College put up artwork. Today, works from the President’s Collection of Art at Swem Library continue to hang on the walls.

While still enrolled at the College, Koestner became a prominent presence in the media and was at the forefront of the national conversation on sexual assault. Her story elicited sympathetic responses in an unprecedented way.

“Had I not been white, had I not been a straight-A student, had I not been at the second-oldest college in the country, had I not played the clarinet and the piano, not had the resume I did, or the demographic qualities, Christian, virgin, you know, all those things, I don’t think my case would have hit any headline ever. Even if I shouted about it,” Koestner said.

Koestner shared her story on Larry King Live, The Oprah Winfrey Show, Inside Edition and appeared on the cover of Time magazine.

The increased media exposure was accompanied by backlash from segments of the student body.

In 1992, the spring of Koestner’s sophomore year, Home Box Office announced they would be adapting Koestner’s story as a part of their “Life Lessons” documentary series, which aimed to educate families about challenging issues.

This adaptation, which would go on to air as “No Visible Bruises: The Katie Koestner Story,” became a significant point of contention among the student body.

Heather Hall ’92, the then-girlfriend of Koestner’s assailant, circulated a petition urging the producers of the HBO docu-series to present “both sides” of the case. The petition was signed by over 1,200 people, and created divisions within the student body.

One of the students who signed the petition was Elizabeth Hall Magill ’93. When a reporter from The Washington Post approached her in 1992, Hall Magill was quoted saying that she did not believe the emotional pressure Koestner experienced constituted rape. When Hall Magill began looking into women and gender studies on her own later in her career, she said she was embarrassed by her earlier words. Today, Hall Magill attributes her younger self’s opinion to the fact that she had never thought critically about this issue. She said that she urges people to set aside their perceived cultural understanding and to listen to those who have been assaulted.

“[Now], I understand what victim blaming is, and that that’s what I was doing, and I think that culturally we need to have an awakening, to understand if a woman says no 12 times, she means no, and that kind of emotional pressure, that is rape,” Hall Magill said. “Katie was a trailblazer in terms of date rape and insisting that we look at it critically.”

Reflecting the campus mindset, editorials in The Flat Hat during those years both condemned her behavior and defended her.

In a letter to the editor titled “Educating a rapist,” in the March 15, 1991 issue of The Flat Hat, Koestner, anonymously, wrote a scathing critique of the College’s response, to her case.

“Welcome new students, transfers, tourists from distant lands — this is the College of William and Mary,” Koestner said in the editorial. “We uphold nearly 300 years of premium higher education at an institution with some of the most stringent entrance requirements in the nation. Here you will find National Merit Scholars, former National Honor Society Presidents, holders of numerous national and state awards for multifarious activities, and rapists.”

In the letter, Koestner criticizes Sam Sadler ’64, M.Ed. ’71, former Vice President of Student Affairs, for allowing her assailant to remain at school after being found guilty.

“We must wonder if the Vice President feels that if the woman’s wounds are hidden in deep crevasses beneath her skin, the damage done to her person is less serious than if physical violence was involved,” Koestner said. “Rape is rape — the destruction dealt will never completely heal.”

She was not alone in speaking out on the issue of sexual assault. In a letter to the editor entitled “Right and wrong” from March 1992, Emily Becker, Elisa Jaramillo ’94 and Eileen Lintz ’93, coordinators for the Women’s Issues Group on campus, defended Koestner.

Not every op-ed was as sympathetic — the Flat Hat editorial board in January 1992 questioned her true motives for speaking out.

“Although Koestner says her intention has always been focused on promoting discussion about the problem and helping other women come forward, her self-initiated crusade seems to have become a campaign to glorify Katie Koestner, and not about the problem itself,” the editorial board said.

Her activism gave her a reputation for outspokenness, which was not always perceived in a positive light. Once, when a student organization voted Koestner “Most Dangerous Man on Campus” as a joke, she confronted them.

“If you want to vote me most dangerous person on campus, I’ll be dangerous,” Koestner said, recalling that moment. “But you can’t harass me and call me a man. So I pretended like I was going to go over to the payphone to pick up the phone and call the police on them. And then they changed it to ‘Person.’”

Through her activism, Koestner aimed to shake up what she saw as Williamsburg’s old-fashioned ways of thinking of the world.

“I was protesting everything that I thought was outrageous and stupid and wrong,” Koestner said.

Another time, in between shifts at the volunteer rape crisis center, Koestner picketed a fraternity house where three rapes had been reported, handing out flyers she had printed out herself at five cents apiece.

“I handed them out, and of course the police come and try to arrest me, because I don’t have have a picketing permit, so I said ‘Okay, then how do I get one of those, and I’ll come back next weekend,’” Koestner said.

The hostility she faced did not discourage her from activism or from focusing on her academics.

“The more people harassed me, the more focused I got on making sure that my grades never were sacrificed,” Koestner said. “Anything that was wrong or unjust, I just tried to do something about it — and still get straight As.”

She went on to graduate Phi Beta Kappa with a degree in public policy and women’s studies. Koestner’s college experience did more than build her character: it served as a basis for a lifetime of activism and advocacy for those who have been sexually assaulted.

“The way I lived my college years taught me that you just have to speak up or shut up,” Koestner said. “If you don’t like something, you’ve got to do something about it, don’t wait around for somebody else to do something, don’t just blog about it or write about it; go do it. Go protest. Go call the police. Go change it.”

Editor’s Note: This article has been updated to provide clarifying language regarding the College’s handling of Koestner’s initial report along with her assailant’s response.