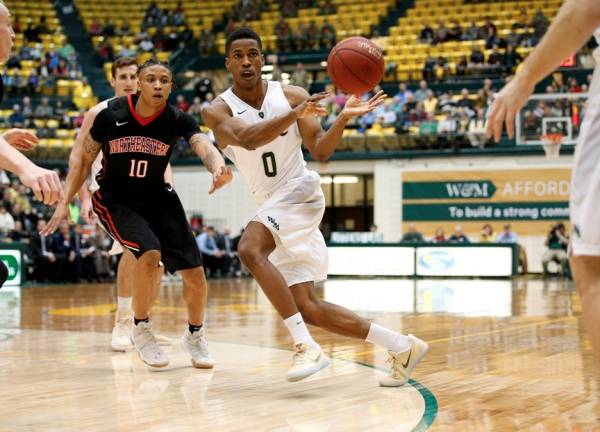 “This team certainly deserved a four-game homestand because we had been on the road forever,” head coach Tony Shaver said. “It was really nice to see us get a little bit of momentum while we were home and play four really fine ball games. Now, as I told them at the end of the game, I’m really proud of you, but now it’s time to take this show on the road.”

For the second time in three games, the Tribe led wire to wire. Behind a quick start from junior guard Greg Malinowski, the Tribe took a 13-point lead with 4 minutes, 46 seconds to go in the first half. Malinowski had five early points, along with two assists and a steal in the first eight minutes.

“We talk about getting back to playing true Tribe basketball,” Malinowski said. “Over the past, what has it been, four games at home now, we’ve been playing great, and great together, more importantly.”

Carrying the team on the scoring front was senior guard Daniel Dixon. He had 18 of his game-high 28 in the first half, including shooting three of four from three-point territory. Even as senior forward Omar Prewitt was in foul trouble, the Tribe found itself up 49-38 at the half.

Coming out of the break, William and Mary kept its lead steady in the low teens until just over seven minutes into the second half. With 12:43 to go, Dixon hit a three-pointer on a pass from junior guard David Cohn to up the Tribe lead to 64-50. That play would kick-start the Tribe run. Just over six minutes later, the Tribe led 87-52, well on its way to an easy victory.

Dixon and junior center Jack Whitman led the way as the Tribe extended the lead. Also contributing was junior guard Oliver Tot, who dished out four of his six assists in the second stanza.

Northeastern guard Brace Bolden, a freshman, had a career game, scoring 20 and going 6 for 8 from three. Guard TJ Williams, one of the top players in the conference, dropped 18 for the Huskies, but went just 7 for 18 from the floor. He also had four turnovers on the night.

Malinowski finished with 14 on the game, while Dixon stuffed the stat sheet with four assists, two blocks and seven rebounds to go along with his solid scoring night. Whitman had 11 for the Tribe with three blocks, while freshman center Nathan Knight added 10 points and five rebounds.

The College remained tied for third place in the Colonial Athletic Association with Elon, while Northeastern dropped to fifth. The Tribe took back to the road to face Towson Sunday afternoon in Baltimore, Md.