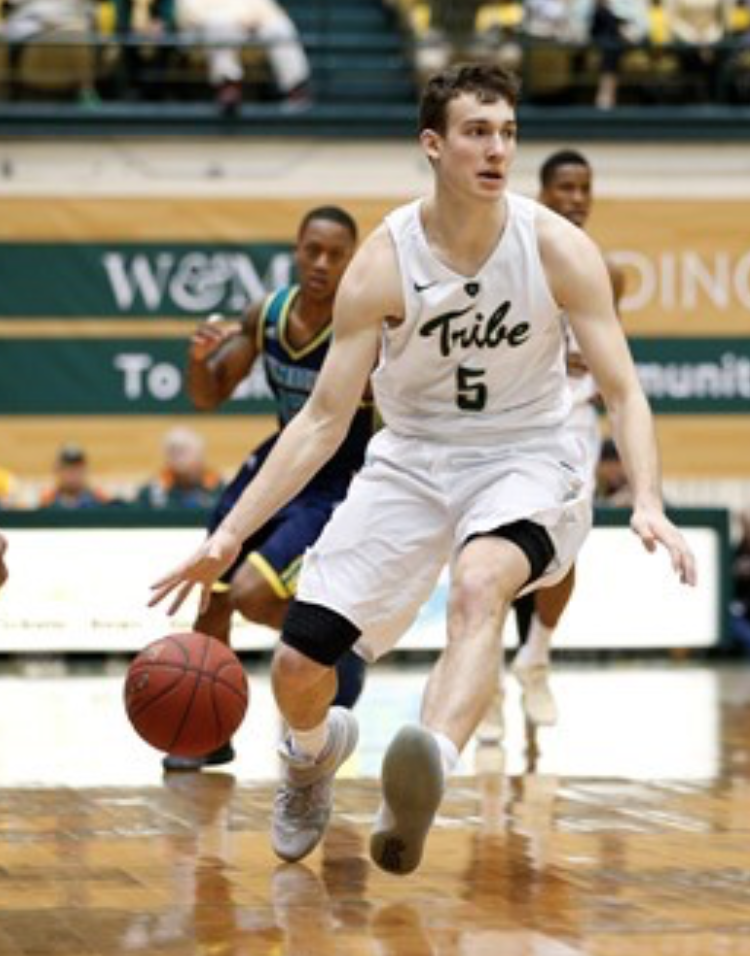 Sitting at a 2-12 record away from Kaplan Arena compared to 12-0 at home, the Tribe hit the road for the final time this regular season desperate to prove itself with a win away from home. The results were mixed, as the College (15-12, 9-7 CAA) fell in a 95-92 overtime heartbreaker to James Madison Thursday before dismantling Delaware 85-64 in a Saturday evening matchup.

Senior guard Daniel Dixon, who has been the Tribe’s go-to player this season, got off to another quick start against the Dukes (8-20, 6-9 CAA), scoring the opening five points for the College. After two powerful dunks and a hot shooting start for JMU, the Tribe trailed 11-9 with just over 16 minutes left in the first half. From there, the game began to slowly slip away. An 11-2 run by the Dukes left the Tribe in an 11-point hole with just over 13 minutes left in the period.

The insertion of junior guard Connor Burchfield sparked the Tribe into cutting down the lead. The next three possessions all resulted in the sharpshooter connecting on a triple, leaving the JMU lead at just 26-20 at the under 12 media timeout.

A layup from junior guard Greg Malinowski cut the deficit to three with 7:34 remaining. The Dukes responded by storming ahead on a 9-0 run to push the margin back to 12. For the final 4 minutes of the half, the teams traded baskets, resulting in a 49-38 halftime lead for JMU.

For the opening 8 minutes of the second half, the teams traded baskets and the Dukes maintained their 12-point lead at 63-52. A quick 10-3 run engineered by Burchfield and senior forward Omar Prewitt brought the deficit to just four with 8 minutes remaining. Moments later, a Dixon layup brought the Tribe within one possession, 69-67.

With 1:40 left in regulation, Prewitt knocked in a jumper, bring the score to 79-77. On the ensuing JMU possession, the Tribe came up with the stop it desperately needed. Nevertheless, a Dixon turnover led to two Dukes free throws. Dixon redeemed himself by quickly scoring to cut the deficit to 81-79 with 36 seconds remaining.

Junior guard David Cohn made a critical play, intercepting a pass and flinging it to Burchfield, who found Dixon yet again for an easy layup to tie the game at 81. The final JMU possession ended with a Prewitt steal, but his last second shot fell just off the mark.

The College came into overtime flat, allowing the Dukes to take a 90-84 lead with just over a minute left in the extra period. Dixon reminded everyone why he has been the team’s most dominant player this season, scoring eight straight Tribe points to cut the deficit to just one, 93-92, with 6 seconds remaining. Dixon’s efforts were too little, too late, as the Dukes hit a pair of free throws to cement the win as Prewitt’s final heave was off the mark.

Dixon led the Tribe with 29 points on 11 of 21 shooting from the field, while Prewitt added a double-double with 17 points and 11 rebounds. Junior center Jack Whitman finished with 18 points and nine rebounds. Burchfield chipped in 17 off the bench in his best offensive game of the season.

Saturday, the Tribe fought through the post-JMU hangover to throttle the Blue Hens (12-17, 5-11 CAA). The opening minutes of the contest were tight, with Delaware holding a slim 23-20 lead with just under 7 minutes left in the half. From there, the College asserted itself offensively, going on an 18-3 run to close the half with a commanding 38-26 lead that it would not relinquish. The run was keyed by Dixon, who scored nine points on the run on a pair of triples and an old-fashioned three-point play.

The second half featured some of the Tribe’s most consistent play on the road this season, as it maintained its lead. The College never allowed the Blue Hens any closer than 11.

The game ended with a satisfying 85-64 road win. As has been typical of conference play, Dixon and Prewitt, who finished with 25 and 23, respectively, led the Tribe. Dixon added eight rebounds on four of seven shooting from deep, while Prewitt added seven board and six assists. As a team, the College handed out 23 assists on 27 made field goals, a testament to the squad’s passing discipline despite having two star scorers on the floor.

The Tribe will finish out the regular season with two straight home games, Thursday at 7 p.m. against Hofstra and Saturday at 7 p.m. against Towson. Currently tied for fourth in the CAA, the College looks to continue its strong play and improve its seed heading into the conference tournament, which will begin March 4.